When I first heard Hilmar Veigar Pétursson, the CEO of CCP Games, use the term "Chaos Era" in an interview with Talking in Stations, my first thought was, "Why is Hilmar referring to the development process of EVE Online in such a negative way?" Only later, when I heard the phrase used by CCP in other places, did I realize the phrase was CCP's new marketing tag line to describe what CCP hope to make players experience.

From this point forward, I will use CCP's marketing phrase as little as possible. What we are witnessing now is a reset of New Eden. What I don't know is whether the disruption occurring is at the level of rerouting the jump gate network so Yulai was no longer the center of the cluster, of if the brain trust at CCP headquarters intends to perform a WoW Cataclysm style change. What I do know is that what EVE Online, particularly sovereign null security space, experienced throughout most of July and throughout August was not a period of mass confusion. The players experienced an event more akin to a natural disaster like a hurricane. 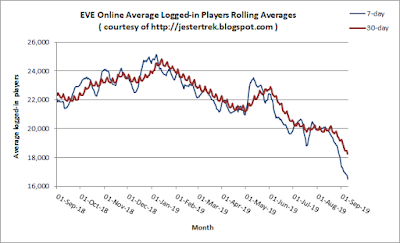 Like a hurricane, people want to know how many people died. Yesterday, Ripard Teg published an activity chart on Reddit. According to the chart, while activity in general declined in July and August, the average concurrent user (ACU) mark hovered at 20,000 characters until the August release hit. If the introduction of Blackout acted like hurricane force winds, the August release was a storm surge. The combination of recon Triglavians wandering outside of invasion zones, a historically high number of bots banned during the month, the realization that Blackout would not end anytime in the foreseeable future, and the launch of WoW Classic on 26 August giving disgruntled players a place to go saw the ACU plummet down to 17,000. Or, in other words, the storm surge possibly caused more damage than the initial cloud wall smashing into civilization. 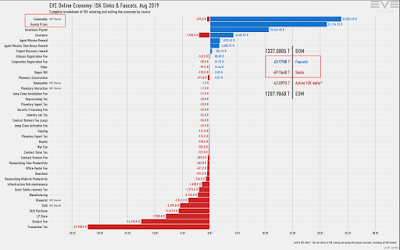 After counting the human cost, the real-world media usually looks at the economic damage. In August, to my knowledge, two events occurred for the first time in the history of EVE Online. The first was the ISK sinks removed more currency from the EVE economy than the ISK faucets poured in. While the implementation of delayed local in null sec regions received most of the attention, the increases in the maximum sales tax from 2% to 5% and maximum broker fees in NPC stations from 3% to 5% introduced on 1 August played a significant factor as well. 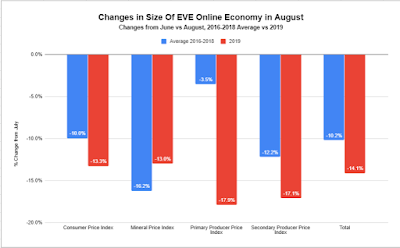 Summer normally sees a contraction of the EVE Online economy, and 2019 was no different. Overall, the New Eden economy contracted 14.1% since June, the last full month before Hurricane Hilmar hit, to August. This year's contraction is 38.2% greater than the average contraction of 10.2% between 2016 and 2018.

Another economic casualty many players faced concerned their investments. The main investment a player can make with their unused ISK is investing in PLEX. Traditionally a safe investment almost guaranteed to increase over time, New Eden's main alternative currency took a major tumble over the past two months. On 12 July, the average price of a single PLEX for sale in The Forge was 3,937,688.10. Even then, players cried out that the price of ISK was too damn high. As of 9 September, the price had dropped 15%, down to 3,346,808.00 ISK. Overall, the price of PLEX has dropped 25.5% since 29 March, when the average price hit a high for the year of 4,489,980.00 ISK. Good news for those looking to PLEX their accounts. Bad news for those PvPers who disdain any form of PvE and choose to pay for their ISK using their real life wallets.

Natural disasters such as hurricanes usually bring stories of looters and other types of lawlessness. During the current storm, the authorities are, if not deterring crime, cracking down on the violators. During the month of August, Team Security banned 4,369 accounts for botting-related activities and another 2,454 for RMT-related activities. To put the numbers in perspective, Unholy Rage, the great bot ban of June 2009, banned a little over 6,200 paying accounts. While we don't know the subscription status of last month's bans, Team Security did act against 6,823 accounts. 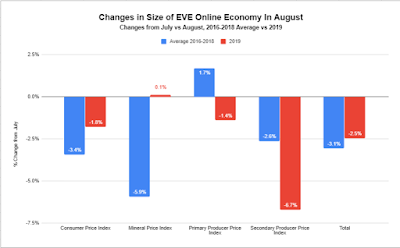 Hurricane Hilmar is gradually losing its destructive power as the survivors of the storm emerge to play the game. One sign of recovery is that the economy only contracted 2.5% in August. The average July to August contraction over the previous 3 years was 3.1%. That's right, New Eden outperformed the previous years' economic performance despite the troubles.

During major storms, some parts of the economy are affected more than others. One can divide the EVE economy into two parts: the RMT token vs the non-RMT economy 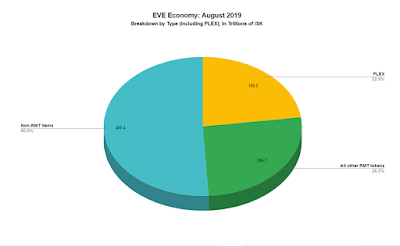 An interesting fact is that CCP does not consider PLEX as part of the regular economy. The most likely explanation is that PLEX, like ISK, is a virtual currency, not an object. The RMT tokens that do count as part of the New Eden economy are:


These 6 items made up 33.9% of the economy in August. When PLEX is included, slightly over 49% of the ISK players spent in the game was on these items. 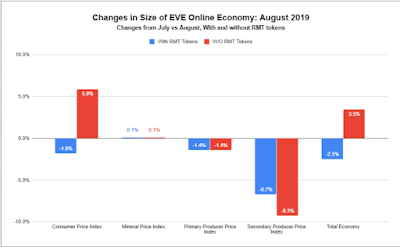 Looking at just the non-RMT economy (everything else but the RMT tokens), an interesting fact emerges. Take away the tokens, and the economy grew by 3.5% in August instead of contracting by 2.5%. The contraction came purely from players not wishing to buy the RMT tokens with their hard-earned ISK. A troubling trend for the corporation with the biggest stake in the health of the RMT economy: CCP Games.

Based on the last three years, the EVE economy should pick up in September. I have my doubts. Just as people who flee a hurricane often don't return home (think the effect Hurricane Katrina had on the population of New Orleans in 2005), I expect many players won't return to EVE due to the massive disruptions to their game play. I also think problems in the RMT portion of the economy will continue and drag down the overall economy. As for the activities that require flying around in space, I fully expect the number of NPCs killed to drop in September, leading to another drop in the bounty ISK faucet. Perhaps growth and activity rates will return somewhat to normal, but for now, I don't see the situation improving until October.
Posted by NoizyGamer at 7:00 AM