By now, thousands of EVE Online players have heard about a story, "How IWI Made Criminals Of CCP And Me", published on TheMittani.com yesterday. I had a simple reaction: WTF! So I decided to do a little fact checking of the article.

The more irritating the article, the deeper I dig. So I decided to start with a sentence most would take on face value:


"What might be less obvious on its face is that IWI is actually a legal (using that word loosely) business entity – owned, formed, and operated under the laws of my own state of Florida."

That's right. After reading the author's article, I trusted his fact checking ability so little that I didn't even trust his statement of where he said IWI operates. So let's go down the rabbit hole one more time and see where we wind up.

I began my investigation by visiting the Florida Department of State's website. Specifically, I performed a search on Optimal Tech Systems, LLC, the company listed on the website as the owner of IWANTISK.com. Imagine my surprise when I saw the results: 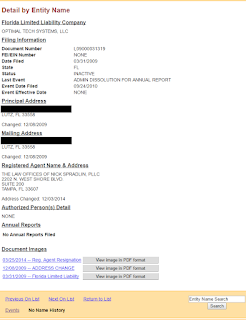 I figured a status of "INACTIVE" meant Optimal Tech Systems, LLC no longer existed, but I wasn't sure when the corporation ended its legal existence in 2010 or when the LLC's registered agent resigned at the end of March 2014. Clicking on the "Events" link brought up the below page: 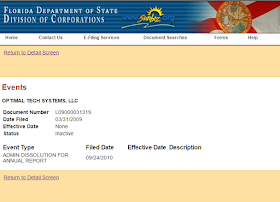 From the above information, I concluded Optimal Tech Systems, LLC went out of business in Florida on 24 September 2010. But what exactly does "Admin dissolution for annual report" mean? I found the website of a Florida law firm with the answer:

Annual reports for all Florida entities are due to the Florida Secretary of State no later than May 1 of each year. If you do not file your annual report, a $400 fine is imposed. If the fine is not paid and the annual report is not filed by the third Friday in September, then the entity will be “administratively dissolved.” (F.S. 607.1420(1)(a)).

WHAT DOES IT MATTER IF MY ENTITY IS “ADMINISTRATIVELY DISSOLVED?”

The Florida Statutes provides a little clarity into three not good things that happen when your entity is administratively dissolved:

A corporation administratively dissolved continues its corporate existence but may not carry on any business except that necessary to wind up and liquidate its business and affairs and notify claimants. F.S. 607.1421(3)(corporations) 608.4481(3)(LLCs)

Another person can use your company name after your company has been administratively dissolved for more than one year. F.S. 607.1422(4)(corporations) 608.4482(4)(LLCs)

So… to sum up… your entity can’t do anything but liquidate itself and anytime anyone (you) purports to act on behalf of (sign something for) the company, it is really you personally who is on the hook for it, provided you have actual notice of the administrative dissolution. And if you don’t know about the administrative dissolution, then that is evidence that you are not properly managing the company. So, unfortunately, either way you are likely to have some upset people on your hands.

I tracked Mr. Leon down and found what I believe is his LinkedIn page. According to the information on the page, Mr. Leon no longer lives in Florida. In addition, I also tracked down the domain information for IWANTISK.com and discovered the domain's IP location fell in Arizona. I also performed a lookup on the first EVE gambling site Mr. Leon worked on, EVEALOPALOUS.COM, and found that IP location also fell within the borders of Arizona.

Since the article on TMC stated that IWANTISK violated state law, I decided to look at the laws of the state where the servers actually reside. If anything, internet spaceship gambling would fall under "social gambling":


7. "Social gambling" means gambling that is not conducted as a business and that involves players who compete on equal terms with each other in a gamble if all of the following apply:


(a) No player receives, or becomes entitled to receive, any benefit, directly or indirectly, other than the player's winnings from the gamble.

(b) No other person receives or becomes entitled to receive any benefit, directly or indirectly, from the gambling activity, including benefits of proprietorship, management or unequal advantage or odds in a series of gambles.

(d) Players "compete on equal terms with each other in a gamble" when no player enjoys an advantage over any other player in the gamble under the conditions or rules of the game or contest.

I don't know about the age requirement, but I do not see anything else in the law that would prevent IWANTISK.com from operating legally in Arizona.

So, to go back to the original statement from the TMC story. Yes, Optimal Tech Systems, LLC was formed in Florida and technically still exists. Legally, however, the only action the corporation can perform is liquidating itself. The corporation cannot operate a service like an internet spaceship casino. The owner of Optimal Tech Systems, Mr. Leon, no longer lives in Florida so is not subject to Florida law. Finally, not only do the server infrastructure not reside in Florida, but the state in which the servers do reside is very friendly to regular online gambling, much less that involving virtual currency and objects.

Now, one can question the honesty and integrity of someone who goes around stating he owns a limited liability corporation when in reality the owner is liable for all debts and actions. But the TMC article did not address that aspect of IWANTISK. Therefore, I give the article 4 bots for not only wasting people's time, but for making everyone who read the piece just a little bit dumber.
NoizyGamer at 6:00 AM
Share