I received the following email about 2 hours ago.

Project Discovery Phase Three
Aid real science from within EVE today
Greetings Rosewalker,
Project Discovery and citizen science have returned! You are invited to once again join the growing ranks of Capsuleers who have contributed to real world science through a mini-game within EVE Online, the results of which will assist in the understanding of how our bodies react to viruses.
The newest iteration of Project Discovery allows you to analyze data produced by flow cytometers. Using a tracing tool, you will draw polygons around clusters of cells. In doing so, you will participate in analyzing COVID-19 data, as well as other related flow cytometry charts, which will help scientists understand better how our immune systems are impacted by this novel coronavirus.

Specifically, you will be demarcating different cell populations present in blood. That data will provide information about how infections and other factors impact immune systems. Your polygons aid scientists in understanding how different cell populations and types are altered through infection.
Log in to EVE Online and check out the detailed in-game Project Discovery tutorial for full details of how to participate and begin aiding the cause of real science once more!

I'll have to check out the COVID version. With the search for exoplanets, I managed to get a Marshal and a heck of a lot of SKINs. I'll also have to check a certain botting forum to read all the complaints that their Project Discovery bots no longer work.
Posted by NoizyGamer at 12:26 PM 1 comments

I originally wasn't going to write about the Council of Stellar Management election now running through 1200 UTC on Monday, 8 June. But when I went to vote last night, I had to do some research in order to figure out how. So, I think I need to help players who wish to vote a hand.
The link to vote is here.
https://community.eveonline.com/community/csm/vote/ 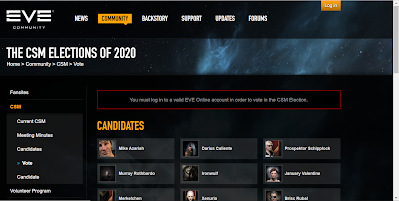 Then log in an account and move the tiles up to the voting screen. Players can vote for up to 10 candidates. I should note players do not have to fill out all 10 positions. If someone only likes three candidates, that person should only vote for those three candidates.
Once again, I will bring up one of my pet peeves about the single-transferable vote system used for CSM elections. People out there will tell people they have to fill out all 10 positions. Others will say, if players don't fill out all 10 positions, they are wasting their vote. I've even heard the argument that people who don't fill out all 10 positions are either lazy or stupid. In my mind, people making those arguments are engaged in voter suppression.
I think people don't understand that EVE Online is just a video game. Who has time to research 40 candidates in order to pick out the top 10 candidates they like? The major null sec alliances get around the issue by creating a list, and even links, to use to make their lives easier. But for those in small groups or even playing solo? I've done that type of research over the past 5 years and let me tell you, I'm pretty sure no one does the research on their own.
Some people are still out there producing content for CSM elections. Declarations of War held two candidate panels. But I think this year most of the information will come from CCP. The company posted a dev blog with information about each candidate.
I'm not going to do the EVE blogger thing of making recommendations. Mostly because I know what I say won't matter. Over the years, starting with the introduction of the STV system, I have watched the rules gradually favor the most organized groups. Who are the largest, most organized groups in EVE? The major null sec alliances.
After last year, I gave up following the elections. The results are basically pre-ordained, except for the last position or two. And that is a hope, not solid analysis. So I voted with my three accounts, and with any luck, Mike Azariah somehow defies the odds and makes it back to the council and the next summit in Reykjavik.
Posted by NoizyGamer at 1:28 PM 1 comments