Investors in Pearl Abyss put a lot of stock in the news that Black Desert Mobile would soon debut in China. The initial news surrounding the commencement of BDM's open beta in China led to a massive sell-off of the Korean game company's stock.

Pearl Abyss officially released its mobile version of its popular Black Desert label in China on Tuesday with commencement of open beta test (OBT), nearly one year after it gained permit from Beijing authorities in June last year in a rare acceptance of a Korean game label in recent years.

"Black Desert Mobile" zoomed to the top of the Chinese app store game charts, becoming the No.1 downloaded game in the country upon release. It also led the charts of Tap Tap, an app market run by Tencent that is jointly marketing the game with iDreamSky. Black Desert Mobile is a mobile version of Black Desert Online, the blockbuster published in 2015 with cumulative downloads of more than 36 million worldwide.

But the fanfare quickly fizzled out, with the rank sliding to 75th later in the day and recovering to 29th Wednesday morning.

Well, the mad lads at CCP headquarters did it. In the run-up to Fanfest 2022 in less than two weeks, they became the first to break the $15 per month barrier for a basic one month subscription price for a major MMORPG. Sure, I pay $21.99 per month for my FFXIV account, but included in the price is $8/month for my 4 extra retainers. But on Friday, CCP announced the price of a standard one-month subscription (known as Omega time) would rise from $14.99 to $19.99 per month.

For those wondering, the price changes are below.

The 2 month and 24 month options are new.

The price of PLEX, the item used in EVE Online's cash shop to purchase Omega game time as well as digital goods, will experience its first price increase since May 2017. The price hike is partially obfuscated by the changes in the number of PLEX offered in each package. The only offering that remains constant is the 500 PLEX amount, which is increasing by 25%.

The two big questions are why, and why now. First for the why. In my opinion, the announcement news article was horribly written. Here are the reasons in CCP's own words.

To continue investing in EVE Online’s evolution and growth, and to realize our mission of EVE Forever, we are updating the price of all existing Omega and PLEX. This adjustment reflects global trends impacting general production costs and accounts for years of inflation, amending the 1-month USD subscription rate for the first time since 2004. These adjustments will have an impact on other currencies.

1. To continue investing in EVE Online's evolution and growth. I think a lot of players are going to wonder about that claim. How many expansion level patches have we seen over the last few years. I doubt many people even noticed Tuesday's article on the history of EVE's database server hardware. With the announcement, the motivation for publishing the article goes beyond fan service to a bunch of computer geeks.

2. "...to realize our mission of EVE Forever..." What? I believe that marketing campaign came out in 2013. Does anyone give it any credibility anymore?

3. "...reflects global trends impacting general production costs..." Having lived through Square Enix' failed attempts to beef up its servers before the launch of the Endwalker expansion, I can sympathize with the increased costs and lack of availability of computer infrastructure and other associated IT costs. Plus, inflation is going to raise the price of labor. The cost of living in Reykjavik is high in the best of times. I don't want to see the staff not able to eat properly.

In addition, CCP Paragon went to Discord and spent 40 minutes talking to players and trying to explain the reasons for the price hike. The big takaway was that the sanctions on Russia due to its invasion of Ukraine really is hurting financially. I remember how an 8% loss of subs in 2011 helped lead to major layoffs in October 2011. I imagine a sudden drop in players from a country that supplies approximately 10% of its player base could hurt financially.

Finally, for the question of "why now?" My question is, if not now, when? I was at Fanfest in 2014 and saw the aftermath of The Rouge Wedding, when CCP told DUST 514 players about the effective death of their game. At the time, I think everyone agreed the devs should have told players before Fanfest to avoid learning the news thousands of miles from home.

CCP also couldn't tell players after Fanfest. The convention ends on 7 May, only 4 days before Pearl Abyss' Q1 2022 earnings call. The price hikes are bound to come up on the call. Best the news comes from CCP than from a blogger who listens to all of the calls live.

The above reasons dictate that the announcement come before Fanfest. However, the stakes for Fanfest and the upcoming May patch just went through the roof. CCP really needs to knock Fanfest out of the park.

Personally, I have three EVE accounts. With the price hike, I will unsub one account whose subscription runs out in December and use part of the money to add two more retainers to my FFXIV account. For those interested, that will bring the cost of my FFXIV account up to $25.99/month. My Omega time on my other two accounts runs out in March and August of 2023. I'll keep those at a cost of $25.98/month because I buy my Omega time in 12 month chunks. I think spending $52/month is a pretty good price for entertainment. I just need to rearrange my spending, because a third EVE account is no longer worth the cost.

The total amount of revenue received since Cloud Imperium Games' founding in April 2012 from known sources is:

Not too bad for a company that showed a negative net cumulative position at the end of 2019.

At its current pace, Cloud Imperium Games will reach $100 million in revenue in 2022. The only question is whether we will see the mark achieved from watching the funding page or if we will need to wait until CIG's 2022 financial statement comes out, probably in December 2023.

I'm not sure these $50 million figures are even newsworthy for CIG anymore. But for now, I think the event is worthy of a post.

Posted by NoizyGamer at 6:53 PM 0 comments

Hilmar's Change Of Mind On NFTs In EVE Online

Currently we are seeing _very predictable feedback_ on what we are doing. Having the perspective of having done this for a decade, I can tell you that this is one of the moments where we look at what our players do and less of what they say. Innovation takes time to set in and the predictable reaction is always to resist change.

In 2011, a leaked internal email from CCP CEO Hilmar Veigar Pétursson contributed greatly to the event known in EVE history as The Summer of Rage. I use the quote above often, as I believe the events led to an era of distrust between the developers and the players. One of the many concerns were CCP's plans to monetize the game.

Move forward almost 11 years. Players are still worried about monetization efforts that would negatively affect the game. Today, the issues involve non-fungable tokens, the metaverse, and play-to-earn mechanics. On 5 November 2021, CCP announced the company was giving out NFTs for prizes in Alliance Tournament XVII. Six days later, Pearl Abyss stated CCP's parent company was looking for opportunities to introduce NFT into both EVE and Black Desert Online on a quarterly earnings call. Also starting on that November call, analysts began asking about the possibility of introducing the play-to-earn model into EVE. Perhaps more ominously, Pearl Abyss invested $3 million into Hyperreal, a metaverse company whose software can create NFTs the day before CCP announced the introduction of NFTs into EVE Online via the Alliance Tournament.

Of course, Hilmar looked excited about the move to embrace NFTs.

The first ever NFTs from #eveonline Alliance Tournament are rolling in. It’s kind of historic! https://t.co/o8qE76jZ9K

He even went around to conferences joining meetings with NFT types.

Which leads us to yesterday. Hilmar made a much needed statement about blockchain technology before Fanfest in a few weeks.

There has been a lot of speculation around blockchain technology, NFTs and cryptocurrency and what that means for the future of EVE Online, so I wanted to address it.

At CCP, our mission is to have the EVE Universe outlive us all: EVE Forever. One huge part of this is exploring new technologies and new possibilities - something EVE players know that I’m always fascinated by. This philosophy is rooted in EVE Online’s inception; when we created EVE, it was seen as too radical and ambitious, yet here we are about to celebrate EVE’s 19th anniversary.

Many of us at CCP have been following the new frontier that has been developing around blockchains and cryptocurrencies for the past few years. We’ve read your feedback and we also see what you see - blockchain tech has both a lot of untapped potential and a lot of work needed before being ready for EVE-scale games.

On that note, we have no plans to add blockchain technology into EVE Online’s global server Tranquility for the foreseeable future. For the coming years, development for Tranquility will focus on building exciting new opportunities on top of the robust foundation that has been laid over the past two decades.

While we remain intrigued by the technology, for us, NFT stands for “Not for Tranquility”. Overall, the EVE IP will continue to push the boundaries of digital economies and virtual worlds - and we will continue to explore that outside of TQ.

Fanfest is a month out and personally, I’m very excited – it’s been two-and-a-half years since our last in-person meet, in London during the EVE World Tour. I look forward to seeing many of you in the flesh again and talk about EVE and our future!

Honestly, I don't know how much to trust the statement. The fiscal quarter ended two weeks ago. I have to ask how much did all the talk of NFTs and selling fitted ships do to EVE subscription and sales rates. One thing I've observed about Hilmar over the 12 years I've played EVE Online. He starts changing his opinions when he starts losing money. When Hilmar stated 11 years ago "where we look at what our players do and less of what they say", he was really talking about how much money players were spending. The next Pearl Abyss earnings call should prove interesting.

Cloud Imperium Games, the maker of Star Citizen and Squadron 42, recorded $20 million in sales in the first fiscal quarter of 2022. For the month, March's total of $5.8 million in revenue from ship and equipment sales fell 20% from February's $7.3 million in sales.

I stumbled across a Google Sheet that tracks funding for the project on an hourly basis. I have seen the file referenced on a couple of Star Citizen videos, so I decided to use the data myself. The results might surprise people. 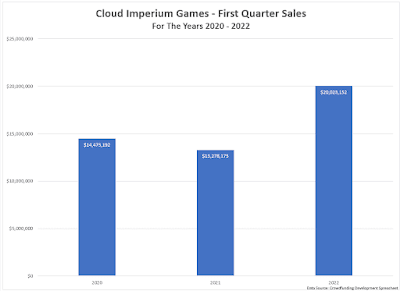 Remember the stories at the beginning of the year about immense dissatisfaction over CIG changing the amount of detail the developers shared on the roadmap? About that dissatisfaction. In the first quarter of 2022, revenue publicly updated every hour on the Star Citizen website is up 50.8% compared to Q1 2021. As a reminder, CIG had its best year financially in 2021, bringing in $86.4 million, not including subscriptions and other forms of income.

Last month I speculated that CIG was on pace to receive $100 million in revenue from ship and equipment sales in 2022. With major sales event like Invictus Launch Week, CitizenCon, and the Intergalactic Aerospace Expo still to come, I feel more confident in stating CIG will raise $100 million in 2022.