As usual, we need to take a look at New Eden's money supply. During the course of August, the amount of ISK in the game increased by 1.4%, or 18.5 trillion. From 1 January to 31 August, the money supply increased by 70.6 trillion ISK, or 5.6%. In perhaps a sign of the effect of the current null sec war, the Active ISK Delta only decreased by 15.3 trillion ISK during a time players traditionally log off to do other things. Last year at this time, with Blackout in effect, the Active ISK Delta decreased by 43.1 trillion ISK. 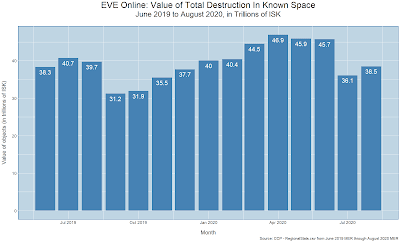 To support the idea of greater activity, the value of the destruction outside of wormhole space increased to 38.5 trillion ISK. Perhaps counter-intuitively, only 25% of the increase occurred in null security space, despite the ongoing fighting between the major powers. Also, compared to a year ago, the value of destruction is down by 3% in all of known space and 3.2% in null security space. 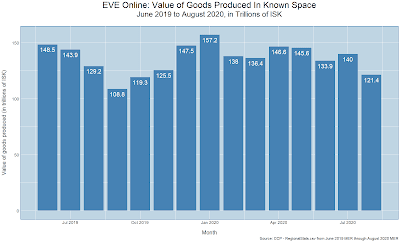 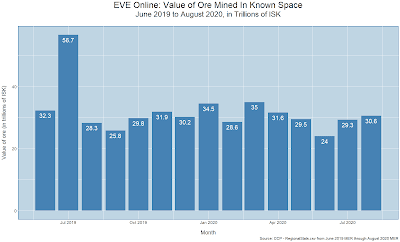 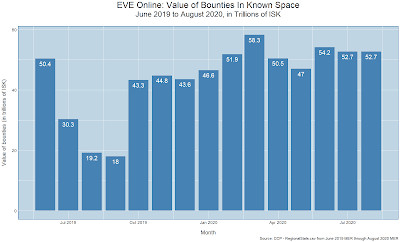 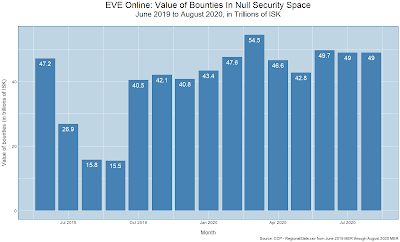 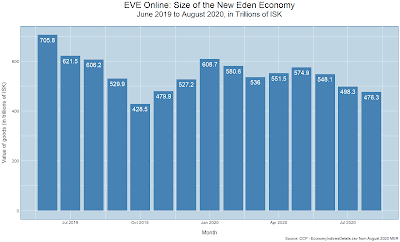 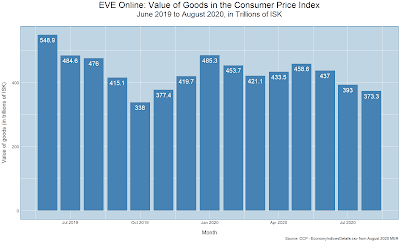 As I've noted in the past, the New Eden economy is consumer-driven, with the value of goods in the CPI making up 78% of the indices total. The value of the CPI fell another 5% in August and is down 21.6% since August 2019.
At this point, I think a look at the indices graph from the MER is in order. The Total Economy and Consumer Price Index graphs above only look at the value of the goods in the baskets for each index. They do not factor in changes in prices. So, if activity is stable, and the prices are decreasing, the value of an index should also decrease.
In the U.S. and many other countries, the change in the Consumer Price Index is a main measurement of inflation. Until told otherwise by CCP, I'll continue to assume the same holds true in the New Eden economy. The website Investopedia defines the consumer price index as follows:

The Consumer Price Index (CPI) is a measure that examines the weighted average of prices of a basket of consumer goods and services, such as transportation, food, and medical care. It is calculated by taking price changes for each item in the predetermined basket of goods and averaging them. Changes in the CPI are used to assess price changes associated with the cost of living. The CPI is one of the most frequently used statistics for identifying periods of inflation or deflation.

Apart from the Mineral Price Index, the indices show a long term deflationary trend. The CPI has declined every month since January 2020. The Primary Producer Price Index began its decline in May 2020. And the Secondary Producer Price Index has steadily declined since May 2019.
I have to admit, I let the upcoming mineral distribution changes color how I looked at the MER this month. Was the economy shrinking due to less activity or deflation? I think the answer is a mix of the two. I also have to bring up the changes to mark August as the final month of relative sanity for the next few months. I don't know how much the buying frenzy following the dev blog will affect the valuations in the economy in September, much less how the change will impact the October MER. I do know that keeping up to date on the information in the monthly economic reports will wind up clarifying what is happening in EVE Online.
Posted by NoizyGamer at 4:54 PM 0 comments

Microsoft Picks Up ZeniMax And Bethesda For $7.5 Billion

If I were still playing Elder Scrolls Online I might react to today's news differently. Plus, I never could get into Fallout or Skyrim. So Microsoft's announcement that the company is acquiring ZeniMax Media & Bethesda Softworks left me shrugging. Well, until I saw the price tag of $7.5 billion.

A lot of people will have profound thoughts about Microsoft vs Sony, etc. Me, I don't like consoles so most of the discussion is just academic. Interesting, but academic with little to no direct impact.

Posted by NoizyGamer at 8:16 PM 0 comments

Email ThisBlogThis!Share to TwitterShare to FacebookShare to Pinterest
Labels: games_business

A Look Into The EVE Online Price Increase For UK Players

On 5 October 2020, there will be an update to the pricing of all Omega and Skill Extractor products for players paying using the Pound Sterling (GBP). This is being done in order to bring GBP prices in line with other main currencies (USD/EUR). Active Omega subscriptions will also be affected, and will update automatically after 5 October.

The main reason for the price change is that changes in currency conversion over the past few years have created an imbalance between the pricing in GBP, USD and EUR.

Furthermore, the prices have not changed since 2014, so these must be updated in order to maintain relative consistency across EVE Online's many markets.

Since the announcement, one nagging question stayed in the back of my mind. Why not also update the prices of PLEX?  Then the reason hit me: low value consignment relief.

In May 2012, players in the UK could begin paying for their subscriptions and other purchases in pound sterling instead of euros. At Fanfest 2012, CCP mentioned something about new laws that would allow the company to lower the subscription price for UK players, but not the real world cost of PLEX. The law in question regarded low value consignment relief. At the time, I wrote about the subject:

Even after the pricing change CCP collects more after taxes from U.K. players than from any other country.  How can this be?  The European Union has a regulation called low value consignment relief.  While for most of Europe the amount is €10, in the U.K. any import from a non-EU country like Iceland with a value of £15 or less is exempt from the normal 20% VAT that domestic companies must pay.

By lowering the price of a subscription in the UK, CCP no longer had to collect the 20% value added tax (VAT) on a subscription. However, CCP couldn't lower the price enough to avoid paying VAT on PLEX sales. I believe that was due to the upper limit of €22 on items affected by the rule. With the strength of the pound sterling during the Eurozone debt crisis, the exchange rate could change enough for PLEX to exceed that amount.
The days of tax avoidance are ending. On 20 July, Her Majesty's Revenue & Customs department published a paper describing how VAT from overseas sales will change in 2021.

For imports of goods from outside the UK in consignments not exceeding £135 in value (which aligns with the threshold for customs duty liability), we will be moving the point at which VAT is collected from the point of importation to the point of sale. This will mean that UK supply VAT, rather than import VAT, will be due on these consignments.
The new arrangements will also involve the abolition of Low Value Consignment Relief, which relieves import VAT on consignments of goods valued at £15 or less.

Or, in other words, CCP needs to increase the price of the two items that are VAT-free for UK players, the 1-month of Omega time and the single skill extractor. The price of a month of Omega time is increasing 20%, from £9.99 to £11.99. The price of a single extractor is increasing by 25%, from £3.99 to £4.99.
The remainder of the prices for both Omega time and skill extractors were increased to levels near what is charged in US dollars. For example, using the exchange rate listed by Morningstar for 10 September, the new £99.99 price of a year's subscription in the UK is $128.02 USD, or $3 less than what those paying in US currency pay. The current rate of £89.99 equates to $115.22, or $16 less than the US price.
Perhaps not surprisingly, PLEX, an item which last had its price adjusted in 2017, is not seeing a price change. The price remains comparable to the US dollar amount, if a bit higher. For instance, the price of PLEX on Amazon.co.uk converts to $43.54, or $3.55 more than the price on Amazon.com.
I also wondered why the prices in the UK were not adjusted in July at the same time CCP increased prices in Russia. I tried to think of any other reasons besides the VAT change that potentially sparked the re-evaluation of pricing in the UK. The date the change takes affect, 5 October, is the first full week of the fourth quarter, but since Pearl Abyss' fiscal year ends on 31 December, the beginning of a new fiscal year is not a reason. I also could not find any evidence of a similar price increase for UK players in Black Desert Online. The closest I could come is that the sale of CCP to Pearl Abyss became final in October 2018.

Perhaps the simplest explanation is best. CCP was prodded to look at pricing in the UK due to the elimination of low value consignment relief. Whoever is in charge of the pricing looked, realized they could raise the prices on certain items and did so. That the company doesn't have to start paying VAT until January just gives the fourth quarter numbers a minor boost that could help make CCP's books look a little better at the end of the year.

Posted by NoizyGamer at 6:45 PM 0 comments

Today is the end of August and I am finally writing about EVE Online's Monthly Economic Report (MER) for July 2020. Examining the July MER interests me for two reasons. First is the beginning of what may turn into one of the large conflicts involving tens of thousands of players that EVE is known for. The second is July is the one year anniversary of the beginning of Blackout, or as I like to call the event, Hurricane Hilmar. In today's post, I'll examine both the month over month changes wrought by the current political climate in null security space as well as comparing the year over year performance of the first month of the Blackout.