Pearl Abyss held it's quarterly earnings call for the second quarter of 2022 yesterday. The South Korean game maker experienced a 2.8% increase in revenue compared to the first quarter of the year. Year-over-year, revenue increased by 6.2%, up to ₩94 billion. 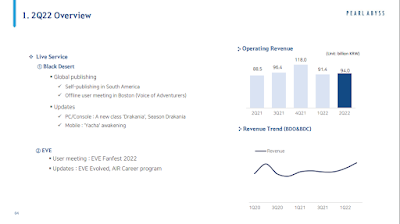 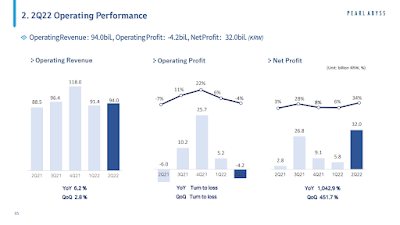 The net profit of ₩32 billion, or 34% of the company's revenue, seems unusual considering the operating loss. Pearl Abyss explained that ₩18 billion of the profit came from tax refunds. The figures also were related to financial gains due to currency valuations. 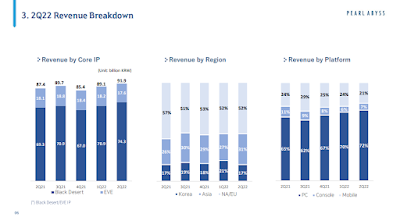 The big EVE news was the disclosure Pearl Abyss plans on opening a new server for Chinese users in Q3. A dev blog was released on 15 July with the details on the move, with a better translation posted on the EVE Online sub-Reddit a day later. If the move works in China, would CCP start a second server in the rest of the world?

The only other news was the lack of updates on Pearl Abyss' upcoming titles. The investment analysts did hear that the company plans on releasing an in-game video trailer sometime before the end of the year for Crimson Desert. Other than that, the company may not launch another game until 2023.

And a war that should have been over in weeks took another 6 months. I was specifically told I was not allowed to attack, that all I could do was camp. Because even though we had one of the greatest moments in the history of wars in Eve Online there was a still a 5% chance of failure. And that 5% chance of failure was too much of a risk to lose our merchandising and our subscribers. The goal was not to win, it was only never to fail.

With the fall of The Mittani from the leadership of Goonswarm Federation and The Imperium, a lot of people have celebrated. Some are disappointed I did not jump on the bandwagon and mindlessly support everything posted on the EVE Online sub-Reddit. Sorry, but relying on that pit of misinformation for accurate news is folly.

But I am about to break that rule. Why? Because The Mittani's replacement, Asher Elias, posted his first speech as the executor of Goonswarm Federation there. With no reliable sources of information available to cover the fall of The Mittani and what follows, I decided to listen to what sources friendly to The Imperium have to say. I recorded the words of Brisc Rubal and Merkelchen on the first The Meta Show episode following The Mittani's resignation. I think Asher's first speech to the alliance is also worthy of recording for posterity.

Hi friends. I haven’t come up here to read you a typical talk about the alliance and what it needs this week, I don’t have an itemized list from each department with bullet points to hit. Instead, I have come to talk to you about Eve Online. I think every one of us can think of another game that if you want to have fun for 60 minutes easily blows Eve Online out of the water. But if I asked you about a Halo match you had 5 years ago you couldn’t tell me a single thing about it. However if you get some Eve nerds sitting around the digital fireside you can bet that they will start waxing poetical about a fight that happened, 5 or even 10 years ago. They will fondly remember their FC and call out the time that they saved the day by landing that scram or the time their titan died and they reshipped into another titan and jumped back into the same fight. I’m an Eve romantic because of those chats around the fireside. There may be a million other games that are better to play but there none that are better to experience. Eve is the game that we tell stories about. Eve is the game where we fondly remember our comrades that we fought with and hope they are doing well, wherever they are in life.

But as time goes by we started getting bitter. It’s easy to start building up anger at this game and at our enemies. We’ve seen how the sausage is made. Everyone here has an idea for how to improve things and we’ve all been frustrated when what we would like to see change doesn’t happen. But, we have also been part of the problem. There’s a problem in video game design where if you let the player sit around and build up their walls and their weapons they will do it in such a way that they will never attack until they have no chance of failure. Until they’ve optimized every last bit of fun out of the game. How many of you here who played Age of Empires or Starcraft can say you didn’t do exactly that. When the game let you, you made your army so big that by the time you finally attacked your CPU foe they had absolutely no chance. And after you did that there was this brief, tiny moment of happiness as you watched the enemy fall so swiftly. But it’s like playing Grand Theft Auto with all the cheats on, it’s fun for about an hour then you get bored.

In our last war, World War Bee, we fought in M2- and we did what every player seeks to do. We utterly destroyed the enemy. We had their titan fleet trapped, we had their morale destroyed. And did we take advantage of that? No, we decided that instead of threatening their keepstar exit route we would sit in that same system for months ineffectually camping them in. Our intel after the war told us that our enemies were shocked at this, they were ready to crumble and they thought we would surely attack their keepstar in NPC Delve and they knew that once we did - they would have to leave.

But we didn’t do that, we let them rebuild their shattered morale. And a war that should have been over in weeks took another 6 months. I was specifically told I was not allowed to attack, that all I could do was camp. Because even though we had one of the greatest moments in the history of wars in Eve Online there was a still a 5% chance of failure. And that 5% chance of failure was too much of a risk to lose our merchandising and our subscribers. The goal was not to win, it was only never to fail.

And to me that was a betrayal. The amount of time that everyone had put into the war was immense. People made sacrifices of their friendships, their money, and their personal lives. I remember friends inviting me to see a movie on Friday night but I would turn it down because I needed to be within sprinting distance of my PC at all times in case the enemy attacked. And when I was told that we couldn’t finish the war it spoke volumes to me about what was more valued, the time and lives of the people who run it or the smallest of chances of failure of the empire. It wasn’t right. But I stayed on, I finished the war at great personal cost, and I didn’t say anything negative. I just told people I was taking a break because I didn’t want to threaten to tear apart the group that I care about, so I just waited for the right time.

And now that time is here, this is our time. It’s time for things to change. If you joined Goons because you wanted to have a totally safe titan until the day you quit the game of boredom then this is no longer the place for you. It was easy in the past to sit behind our player erected walls and have our leader insult our enemies based on the things they did out of game, based on who they were. The policy, unspoken but ever-present, was to make them so angry at us out of the game that they had to attack us in the game. This is corrosive, and it’s no way to run an alliance.

From now on we will make people dislike us because we evicted them from their space. Because we made them move three times. They will want revenge because we fought them not because we made fun of how their leader looks. You will get the chance to be part of the stories that people tell about this game. You will have the chance of incredible victory or the chance to experience failure. It’s time we start pushing in the chips that we’ve gathered. You bought a super? You built a titan? It’s time you had a chance to use those not to shoot an undefended fort but to shoot their guns in anger. To become the story.

In Eve you can’t vote for an alliance executor. But there is a truly powerful way you can show your endorsement of a leader. You vote with your feet. And I’m going to ask you to vote for me. Eve Online is a game that delivers greater experiences than any other game but it also demands more sacrifices. And when you are staying up that extra hour late even though you’d rather be sleeping because you work tomorrow your alliance leader won’t be missing it because he’s got other things to do. He will be right next to you in fleet.

So if this is the future you want for Goons, the future you want for the Imperium, I want your endorsement. I want you to resub that capital account. I want you to show up to fleets in greater and greater numbers. Be there next to me - we will create those memories, those stories together. There was a time when every one of you was a romantic about this game but slowly you lost it. You took on the title “bittervet” and you bore it proudly like armour so that no one could accuse you of loving it and make a fool of you for liking it like you once did. If you ask me if I’m bitter about Eve Online, about Goons and the Imperium. No, no I’m not. I’ve fought with every one of you and all I remember are the good memories. How can you not be romantic about Eve Online? So I thank you for the trust you’ve given me, and I ask you to be a romantic about Eve Online, about Goons, and the Imperium again with me. I’ll see you in fleet.

In July, CIG introduced a technical improvement with increased server capacity. In update 3.17.2 released on Thursday, the server cap increased from 50 to 100 characters. I normally don't comment on technical news, but after 10 years of development, the ability to have 100 players play together is noteworthy.