I got home last night excited to log into EVE. I received a minor disappointment when I didn't see the Shadow of the Serpent content on the character selection screen. Hey, bugs happen. I'd also heard something about a docking animation and wanted to try it out.

I thought the docking animation occurred outside the ship, which caused me a little concern. The truth was, in a strange way, worse. The first thing I saw when I logged into the game was my Cheetah slowly flying past as my disembodied body started drifting in the other direction. That messed with my head.

I have a little problem with motion sickness in games. For example, I can't play Elder Scrolls Online for long periods of time due to the camera setup. In most games when I play in third person mode, the camera is positioned in such a was that the camera angle is looking in the same direction that my avatar is travelling. Not so in ESO. The angle is off just enough that I start feeling queasy if I don't take frequent breaks.

I started feeling the same way watching my ship fly in the station. I didn't know why, though, so I undocked and played with the little blue pointer that now protrudes from the front of ships. I can see the use for making instawarp undocking bookmarks, so I flew out 150 km from the station, then returned to the station and docked.

Upon docking, the flying in station animation appeared and I started feeling a little strange again as I watched my ship fly by. I figured out that I needed to stop my ship to make the feeling go away, but I couldn't. Aargh!

I felt really frustrated because for almost seven years, I always had control of my ship. Even in those instances where a player tackled and destroyed my ship, I still had a feeling of control, even if all I could do was align to a planet so I could warp my pod to safety. I really, really wanted to stop my ship, but the game had taken the control away from me and all I could do is look away from my screen in order to make the feeling go away.

I'll admit I said a couple of bad words and then logged out of the game. I figured maybe if I ate dinner I would feel better. I usually try to eat something before playing ESO as that seems to help. The solution to my problem hit me while preparing a salad. My client was set to view the ship hanger when I docked. What would happen if I switched to the Captain's Quarters?

Op success! Instead of seeing the flying ship, I received a loading screen and then appeared in my Captain's Quarters. 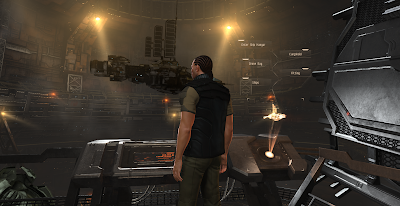 Now, some may think that flying in stations is just a cynical ploy by CCP to trick players into using the Captain's Quarters instead of the ship hangar. If so, they succeeded in getting this player to make the switch. Anything to keep from seeing that stupid animation again.
Posted by NoizyGamer at 6:00 AM