Sometimes, a plan just doesn't come together. Case in point, my plans for my alpha character. At first, everything worked great. The new NPE, which I'm now learning to call Inception, the career agents, and then the grind to 1.0 standings with the Minmatar Republic in order to run level 2 missions with the Minmatar. All of this leading up to running through the COSMOS missions. The prospect of getting faction blueprint copies had visions of ISK dancing through my head.

The first obstacle I encountered involved trying to get a mission from a level 2 agent. I received the brushoff.

What? I don't have the standings? But no, that is not the message the agents give when the issue is insufficient standing. This is. 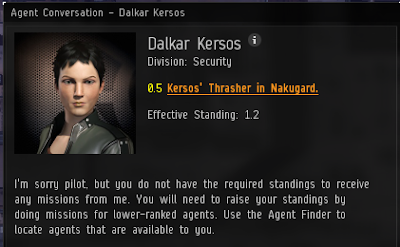 Dalkar Kersos is a level 3 agent, so the message made sense. But getting rejected by a level 2 agent? I still can't figure out the problem.

Then the problems got a little worse. I gave up on these agents and went to the Sanctum Psychosis in Lanngisi. I received a 3-run blueprint copy of a 250mm 'Jolt' artillery cannon. That's when I discovered alphas cannot manufacture any of these meta modules, as they require omega clone skills. What's worse is I can only create one contract at a time. So even selling the BPC is difficult.

I really thought I had an alternative way to make ISK that would immerse me into the lore at the same time. Looks like I need to come up with another plan.
Posted by NoizyGamer at 6:00 AM