A lot of players become upset when they see battles in EVE Online referred to in terms of real world currency lost. The gaming press are not the only ones who make the conversion. In the dev blog discussing the battle of B-R5RB during the Halloween War in January 2014, CCP quoted a real world value to the ships lost in the battle of between $300,000-$330,000 USD.

Those upset with such real world valuations don't want people to think that players actually spend that kind of money purchasing ships. While the ships in that battle perhaps were not all purchased with real world cash, many were. Collectively, EVE players spend millions of pounds, dollars, and euros each year purchasing ISK in order to buy ships and fittings. 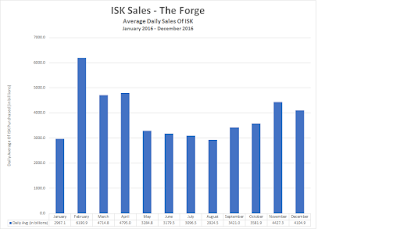 In 2016, players exchanged 1.4 quadrillion ISK for game time in the form of PLEX in The Forge, the region containing EVE's main trade hub of Jita. To put the sum in perspective, the combined losses for both sides in the battle of B-R5RB totalled 11 trillion ISK.

Of course, the figures usually reported in the gaming press for EVE battles use the rates players pay to purchase PLEX from either CCP or an authorized PLEX reseller. As in all popular MMORPGs, a black market developed around EVE. I don't think anyone knows the true size of the illicit ISK trade, but I track a popular RMT site, Player Auctions, to get some sort of idea. In 2016, I recorded 3883 unique transactions involving 34.7 trillion ISK sold for an estimated $250,000 USD. While the total includes 117 individuals or groups who sold ISK to at least one player during the year, the numbers below are in no way inclusive of all, or even most, illicit RMT activity surrounding EVE. 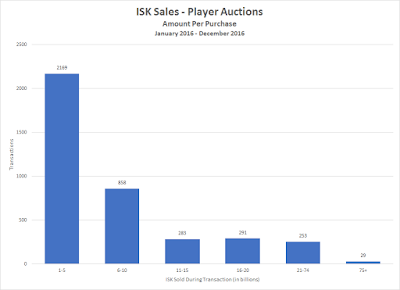 For the purpose of this post, I wanted to find out just how many capital and supercapital players buy using illicitly obtained ISK. I asked around and the consensus was that dreadnaughts, carriers, and fax machines each sell for around 2 billion ISK. That information didn't help as the median amount of ISK purchased in a black market deal on PA was 5 billion ISK in 2016. I did find out that supercarriers cost around 20 billion and titans around 75 billion. In 2016, I recorded 29 transactions involving 75 billion ISK or more and 253 where between 21 and 74 billion ISK exchanged hands. That potentially is a lot of supers.

Perhaps I spend too much time looking at real money trading, both the type sanctioned by game companies and the black market type, to blink twice at these types of numbers. The major saving grace for EVE is that the power purchased by players opening up their wallets is temporary, as the game's harsh death penalty can see $50 explode in the blink of an eye. One can purchase a lot of power in New Eden with real world cash. Just don't expect to keep it.
Posted by NoizyGamer at 6:00 AM