Sometimes following Twitter leads to some amazing things. Last night I saw this Tweet in my timeline.

This is bad... this is very very bad... https://t.co/MDJsFLuHJN #tweetfleet Please CCP confirm soon this is not keys for lockboxes.
— Ashterothi (@Ashterothi) August 9, 2017


So I wound up logging into the Singularity test server last night to see for myself. Sure enough, the crate item does indeed state that the manual for unpacking and assembling the ship seems to be missing. 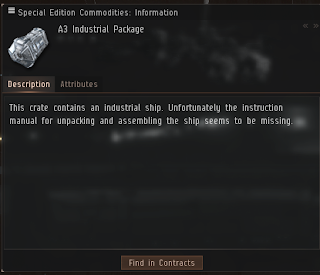 The assumption that Ashterothi made is that these event prizes will require some sort of real money payment to open. Reaching such a conclusion doesn't pass the smell test. Lockboxes are traditionally just a random drop item. Making someone pay to get the prizes from a progression event like what I saw on Sisi is such an idiotic concept that CCP would deserve to lose half their customers if they even thought to do such a thing. But perhaps I'm wrong and someone in Reykjavik put a drooling imbecile in charge of monetization. 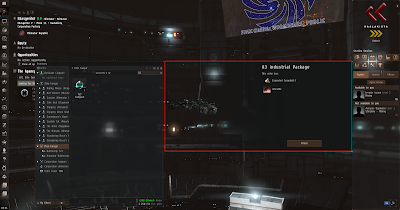 Something I noticed about the redeem window is that the left half is transparent. I marked in red where the window actually extended. Usually I would expect half the area to have some sort of graphic that would make opening the crate a fancier experience. The one thing I do expect is that the ships earned while doing the events will show up as the race of the pilot opening the crate so that alpha players receive ships they can use. The character I used is Minmatar and received a Minmatar industrial ship.

As the final screenshot shows, the event is still under construction, so I can't definitively state that CCP is not using the event to introduce lockboxes. Perhaps the missing part of the window will explain what the text in the item window means. But at this point, using the text of the crate to indicate that CCP is introducing lockboxes is a tremendous leap of logic.
Posted by NoizyGamer at 6:00 AM