EVE Vegas 2017: The Most Meta Thing I'll See This Weekend

Walking around Las Vegas, I think I found the most meta concept I'll run across before registration for EVE Vegas even begins. 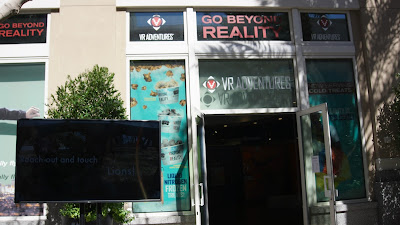 To me, Las Vegas is a rather escapist place. A city designed to part visitors with as much money as possible, Sin City offers the promise of a refuge from the reality of a mundane life, at least for a weekend. I find the illusion rather threadbear myself, which is why I find the presence of people selling virtual reality experiences so amusing. Even in Vegas, some people believe that the way to wealth is to provide an experience in a place away from the reality surrounding them.

I understand the lure of virtual reality equipment. I own an Oculus Rift and a Gear VR and last week finally purchased the Touch controllers. I still haven't played EVE: Valkyrie as I got sidetracked into playing a sci-fi themed tower defense game called Defense Grid 2. With your vision totally focused on the experience in front of you and headphones blocking out all outside sound, virtual reality offers an escape from everyday life without having to leave your home.

I think the trend of storefronts offering virtual reality experiences to people is a promising sign for the VR industry. Back in the 1980s and 1990s, the video arcade allowed those who could not afford to purchase game consoles a chance to play video games. Is it any wonder that as equipment became more affordable, video game revenue ($91 billion worldwide) surpassed movie industry ($38.6 billion) and music industry ($16.1 billion) revenue combined? According to the Venture Beat article, the first year of virtual reality was "sobering", with the industry only growing to $2.7 billion.

As someone who spends a lot of time thinking about video games and the surrounding issues, I could easily get caught up in an echo chamber that says that, while I might enjoy VR myself, the technology just isn't their. Sometimes, walking away from the keyboard and experiencing different places where I wouldn't normally travel, is necessary to bring a different point of view. To me, the early indications are that VR is at a point the video game industry was at 30-35 years ago. I may not live to see the day where VR becomes as ubiquitous as computers are today. But I'm pretty sure the day will arrive.
Posted by NoizyGamer at 10:13 AM