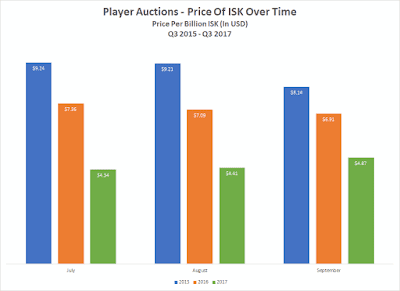 The first graph shows the average price of 1 billion ISK sold on the gold selling site Player Auctions across three years. I use Player Auctions not only because the data is available at a transaction level, but due to the sheer volume of ISK sold by over one hundred sellers each year through the site. In 2017, I expect over 45 trillion (45,000 billion) ISK to pass through the site. The reason to show the graph is to demonstrate that as time passes, the value of the EVE Online Interstellar Kredit versus the U.S. dollar consistently decreases, forcing the ISK sellers to work harder and harder to make the same amount of profit. 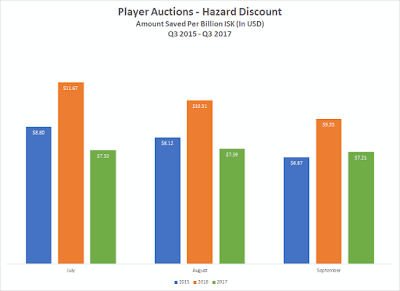 The second graph shows the hazard discount in the third quarter for the years 2015-2017. The numbers from year to year were very inconsistent. Were the numbers in 2016 so high because of casinos? As much as claiming casinos pumping cheap ISK into the black market would advance some groups' narratives, I believe a more fundamental change occurred during 2016. 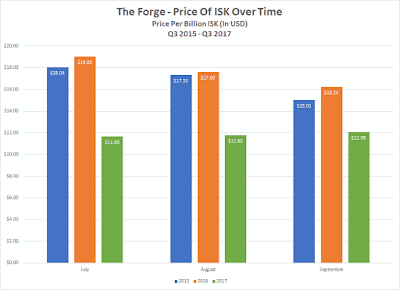 But before discussing 2016, a significant event took place in the spring of 2015. The price of 1 billion ISK in The Forge fell below $20 when converted from ISK to U.S. dollars. In August 2015, I theorized:


"My current working theory is that in April, the price of ISK not only fell within the middle of the hazard discount, but also was 50% cheaper than ISK purchased in Jita. That 50% off is a powerful mental influence to get people to buy things. I believe that instead of looking for a $10/billion discount, black market ISK buyers will now look for 50% off. Quite frankly, ISK sellers can no longer afford to undercut the Jita price by $10/billion." 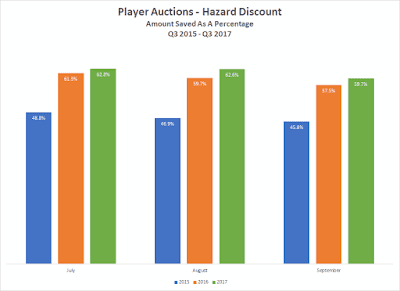 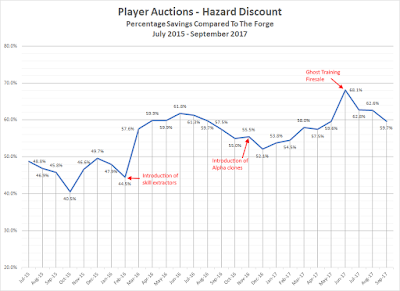 What event occurred in February that caused the increase? The introduction of the selling of skill points. For the first time in EVE's history, CCP sold power that other players could not destroy, and players jumped at the chance to seize some of that power for themselves. The change affected the secondary markets as well as markets in The Forge, with Player Auctions seeing the real world value of ISK sold nearly tripling between January 2016 and March 2016. The introduction of skill point injectors breathed fresh life into the secondary markets, which we continue to see to the present day. To that we can now add a depressing factor on the profits of the ISK sellers in the form of an expectation of lower prices for their goods than existed prior to 9 February 2016. 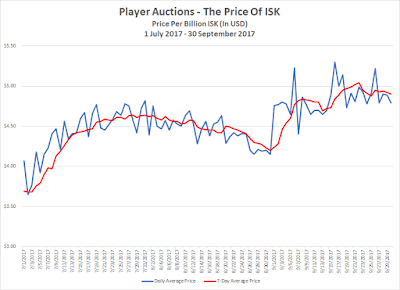 I will add one final graph to illustrate a point. While the hazard discount fell below 60% in September 2017, an unusual event pushed the discount lower. On 1 September, the prices rose $0.50 - $0.60 USD. Not just for ISK purchased, but the price offered by most of the ISK sellers on Player Auctions. I don't know why, but the cause does not look like action taken by CCP. I don't know if a popular payment system used by ISK sellers raised their fees or if farmers unionized and told the retailers who sell to players that they were raising their prices. Perhaps the major sellers got together and decided to engage in some cartel practices. What I do know is that major players in the ISK trade are feeling some sort of bottom up pricing pressure in addition to the top down pressure imposed by the price of PLEX.
Posted by NoizyGamer at 9:00 AM