I don't know if a major hacking attack happened yesterday. The odds are good that hackers accessed the customer records of a major company, which usually results in account hacking attempts against CCP, and CCP Bugartist wanted to warn players to protect themselves. But the number of hacked accounts is increasing. In a Reddit thread on 9 July complaining about slow responses for aid with hacked accounts, EVE Universe Community Manager CCP Falcon stated:


We're of the opinion internally that it's a combination of a number of factors: Our Customer Service team and our security team are changing internal policies, adapting to the situation and working on clearing up the tickets that have been caused due to this, but it's taking time because of the complexity of the investigations that need to happen.

Contrary to popular belief, it's not just a case of throwing bodies at the problem, this won't work. The Customer Support guys who're working on this are extremely skilled at what they do, with intricate knowledge of our tools and systems. That doesn't come overnight, most of the staff assigned to working on this have been with us 5+ years. 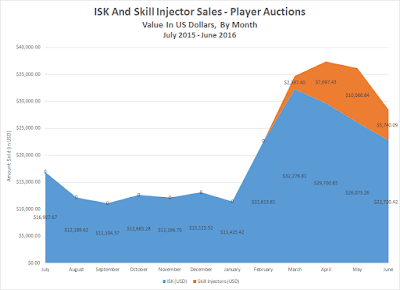 CCP Falcon also explained why dealing with hacked accounts is so difficult.

Progress on resolving hacked account issues is a lot slower than ship reimbursement. Each case can take days each if it needs extensive investigation.

For example, if your account is hacked and all your SP is drained, and your assets are taken, the SP then may be sold on the ingame market to unwitting buyers to raise ISK that's then sold for RMT purposes, along with the assets.

It's then a matter of tracking all this SP and all these assets, reversing transactions where appropriate, or making the decision not to if it would have an effect on an innocent player who's done nothing wrong and simply legitimately bought SP from the market.

These are incredibly complicated cases that have to be treated very carefully so as not to cause a chain reaction that affects multiple people who are innocent of any wrongdoing.

It's not just a case of "reverse everything and give the account back". It's far more complicated.

The best advice we can give you is to make sure your account is well protected with 2fa, and that you're not sharing your login details with anyone.

The above description of the issue suggests that CCP uses the results of the investigations to ban those involved either buying or selling items and skill points. Reviews left by dissatisfied buyers show the internal policy changes CCP Falcon mentioned are having an effect. 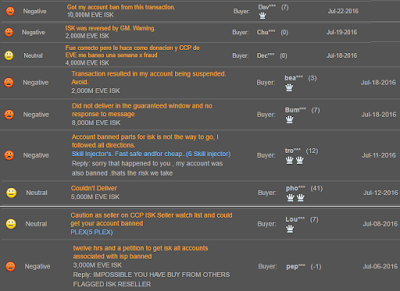 I should add that up until this month, bans against ISK buyers and sellers appeared in the Player Auction reviews mainly during the first week of a month. In July, as the graphic above shows, the bans occurred on a continuous basis.

One last observation about the state of the secondary market. One interesting fact is that ISK sellers try to convince potential buyers that they do not obtain their products through illegal means. They do so because CCP takes a closer look at hacked accounts than they do when catching botters. With ISK sellers relying more on hackers, the risk of buying ISK and skill points off the black market just keeps growing.
Posted by NoizyGamer at 6:00 AM