I will admit to some skepticism when CCP announced the Abyssal Deadspace and Triglavian content this spring. The idea of instanced dungeons one had to complete in a set amount of time or die in didn't sound very appealing. Add in the possibility of a gank squad waiting outside the entrance to take my stuff, and I figured I needed to let the novelty of Abyssal Deadspace wear off before running the content on Tranquility.

Abyssal deadspace has a lot of good qualities that make the feature the best PvE content I've run in EVE. First, the 20 minute timer introduces a sense of urgency not even present when running sites in low sec. Don't finish the site in 20 minutes, your ship blows up and you wake up in a pod bay. The sites also have boundaries. Unlike the alliance tournament, though, running past the boundary does not bring instant death. Stay outside the boundary long enough, though, and the pressures of the depths eventually crush your ship. 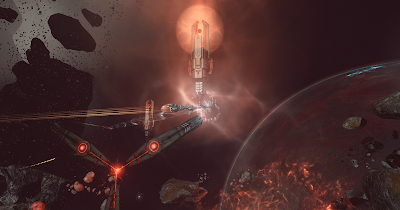 Another interesting twist is the sites are procedurally generated. After awhile the different types of spawns become familiar. I do have to admit the remote repping battleships and the battleship that sits at the edge of the site looking to bait unsuspecting players to hurtle outside the pocket were disconcerting at first. No blindly orbiting an NPC an shooting until it's dead. I did that on the test server in the final pocket of a site once and wound up 60 km from the exit gate. A good thing death on Singularity doesn't really count. But I highly advise manually piloting, especially when facing Vedmaks. The Triglavians stop shooting at 23 km, which resets the ramp-up on their weapons. Orbiting an object allows the disintegrator to ramp-up to maximum damage. Death usually follows. The best part is, one never knows what encounters the random number generator will present.

Finally, the art team did a fantastic job on the sites. The Abyssal deadspace sites are probably the most beautiful in all of EVE. Sometimes I feel like I'm in the middle of an aquarium, which is fitting for the game's submarine-like physics. At other times I feel like I'm flying though an atmosphere with really great terrain. According to the presentations at EVE Vegas, CCP will use the Abyssal site technology to bring atmospheric flight to EVE for the first time in the upcoming live event in December. 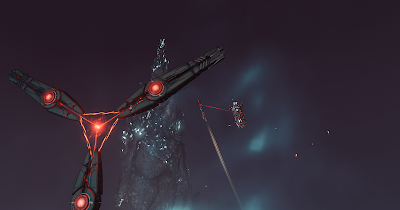 Running the Abyssal deadspace sites did require me to leave my comfort zone. For over 8 years, running PvE content meant sniping from long range and signature/speed tank. An effective tactic although I'm sure many will say I'm playing the game wrong. But I never used faction or tech 2 ammunition or modules worth more than tech 2 gear. The goal was to not fly a blinged out ship that would attract attention.

With the introduction of Abyssal space, I fly a lot more bling than I did even as recently as a year ago. If I fit a cap battery, I find myself using faction types like Republic Fleet or Thukkur rather than a tech 2 version. Federation Navy 10MN Afterburners are now a staple of any of my ships running Abyssal sites. As for faction ammo? Never use a filament without it.

With all the PvE goodness represented by Abyssal deadspace, the big downside is that the average age of players running the content is 5 years. With an eye towards expanding player usage, CCP is adding features aimed at lowering the barrier to entry. The new multi-player option allows lower skill players to climb into a frigate with two friends to run the sites. The patch notes also indicate that CCP has removed all webbing frigates from the tier 1 (aka Calm) sites. In addition, all tiers have had an adjustment on how many NPCs can spawn at once, with tiers 1-3 spawning on average fewer NPCs.

CCP is also adding a PvP arena, but that falls outside the scope of this post. Personally, I don't make enough from running Abyssal sites to justify risking my heavy assault cruisers in a fight to the death. But I am getting to the point where I might soon see the profit potential. Through 72 sites, I've grown my initial stock of 3 tier 1 filaments into 28 tier 1-3 filaments and 8 tier 4 filaments. I even went out and purchased a Sacrilege to run the Dark Abyssal sites, the weakness of my Vagabond. I have 450 million ISK worth of drops sitting in a can in a station and sold another 150 million ISK in red loot to NPC buyers.

If I don't make a lot of ISK from Abyssal deadspace, why run the content? In my case, I find the content a bit addictive. I sat down at my computer Sunday and a few hours later had run 15 sites. One of the reasons this post came out on a Tuesday is I was too busy playing EVE over the weekend to write. Sure, I got some pretty screenshots, but I don't have a machine in which I insert screenshots and a post emerges.
Posted by NoizyGamer at 7:59 AM