What Does A "Double Training" Weekend In EVE Online Look Like?

Kim Jong Suit: Hello! I just came up with a great way to increase your player numbers this weekend!

Kim Jong Suit: Of course not! You also need to hold a Double XP weekend.

Kim Jong Suit: Yes! Players will be so excited to get extra XP that they will log in and play for hours to get double the XP. And while they play, they will realize all the things they can buy to make their lives easier, and the money will flow through the cash shop.

CCP WhatNow: You haven't played EVE, have you?

Kim Jong Suit: Of course not! EVE is way too grindy.

CCP WhatNow: No, we haven't.

Kim Jong Suit: No wonder we were able to buy CCP! Trust me. Do as I say and we will all be rich! *click*


A double-XP weekend just doesn't work in EVE Online like it does in other games due to the way players gain skill points. A character gains skill points just for existing and having a skill in the skill queue. CCP came up with an alternative plan more fitting for EVE.

We're super happy to announce that as of tomorrow downtime, New Eden will be enjoying its first double training weekend!
Be sure to log in over the course of the weekend and claim your skillpoints, they'll be available through until downtime on November 19th! 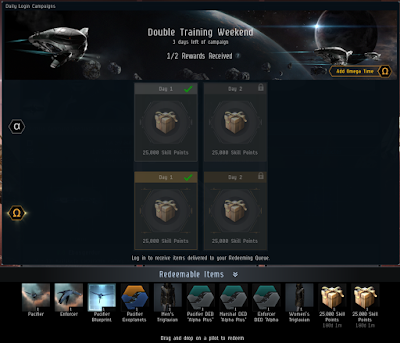 Yes, you do have to log into the client on two separate days, but to get the skill points does not require entering the game world on a character. The skill points are added to the redemption queue and don't expire for 180 days.

Honestly, I'm a little baffled by the promotion unless CCP believes that the content released in Onslaught is not enough to attract players back to the game.

I get the concern. But I didn't think CCP would try to goose the numbers up in such a fashion. This feels like something someone from Pearl Abyss who's never played EVE would think is a good idea. Because the reason to hold a double XP weekend is to increase player engagement with the game. A promotion that doesn't even require logging a character into the game seems to not qualify.
Posted by NoizyGamer at 8:19 AM