How Big Is The PLEX Trade In The Forge?

One of the more amusing sights in EVE Online is the conflict between Pandemic Horde and Test Alliance Please Ignore over the citadels in Perimeter. Well, the effort of null sec entities fighting over a high sec system is amusing until one realizes the prize is control of the PLEX trade in New Eden's main trade hub. In the first quarter of 2019, almost 550 trillion ISK worth of PLEX was traded in The Forge, with the citadels playing a huge roll in the sales. Even if a player entity could charge a 0.1% tax on PLEX transactions in The Forge that would amount to nearly 550 billion ISK over a three month period. No wonder TEST plopped down a keepstar in high sec.

The types of numbers the players are fighting over are nearly incomprehensible. According to the information I pulled from the market ESI, over 296,000 months, or nearly 24,700 years, or Omega (aka subscription) time was traded in the first 3 months of 2019. That's almost 3,300 months of Omega time a day, or enough to pay for 100,000 subscriptions every month. I realize that much of the PLEX sold on the market is either flipped or held as an investment, but even 50,000 accounts utilizing PLEX to pay for game time is a lot of accounts paying to play "for free". Also, a lot of people paying for ISK using real life money.

Even when converting the data to time, the numbers are still mind-numbing. So instead, I thought I'd make a few graphs with information gathered from the first three monthly economic reports for 2019 to try to visually show how big the PLEX market in The Forge is compared to the overall New Eden economy. 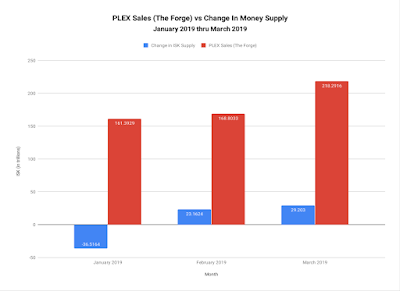 The first graph shows the value of PLEX sales in ISK vs the monthly growth in the game's money supply. Don't confuse the figure with the Active ISK Delta, which is the amount of ISK entering the game on returning players' accounts subtracted from ISK leaving the game on departing players' accounts. The above graph shows the entire change in the money supply in a month, including the Active ISK Delta. In the first quarter of 2019, the money supply grew 15.8 trillion ISK, or by 1.2%. The value of the PLEX sold in The Forge over the same period of time, 548.6 trillion, was a remarkable, at least to me, 34.6 times the growth in the money supply. 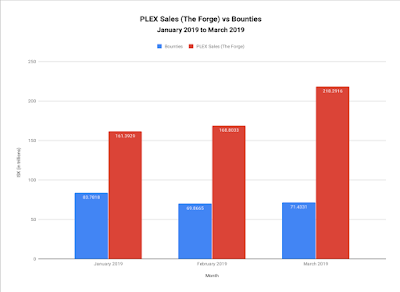 If the PLEX market dwarfs the growth in the money supply, then what about the biggest ISK faucet in the game, bounties. Many players in null sec plop a Vexor Navy Issue down someplace and walk away from the keyboard, letting the ship's drones do the work of making ISK. I doubt the above graph comes as a surprise to null sec players, especially Rorqual pilots, but the amount of ISK earned ratting does not cover all the PLEX traded in The Forge, much less the entire game. Yes, the 225 trillion ISK in bounties in the first three months of 2019 could have covered the losses of 20 battles the size of B-R4RB, but still only was 41% of the value of PLEX traded in The Forge. 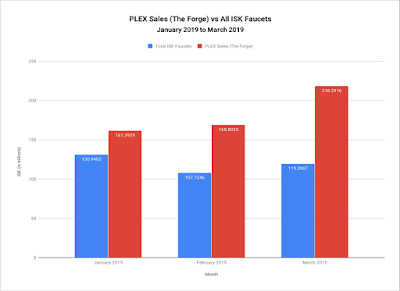 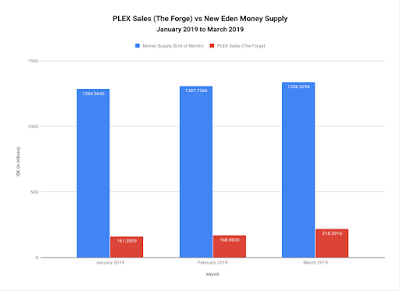 At this point, I couldn't blame a reader for asking, "Is there anything the PLEX market in The Forge doesn't dwarf?" The big thing, of course, is the total money supply. In January and Feburary, the PLEX trade in The Forge was worth between 12.5% and 13.0% of the money supply. The end of March trade that members of the CSM were upset helped raise that figure to 16.3% in March.

Hopefully, I've explained at least one reason why two major null sec entities would want to war over citadels in high sec. The amount of ISK involved is staggering. Is the trade which is a sanctioned way for players to purchase virtual currency, healthy for the game? I'll leave that up to people who know the economy far better than I?
Posted by NoizyGamer at 8:10 AM