Putting EVE Online's First Half Of 2020 Numbers In Perspective

Last week's Pearl Abyss earnings call was good news for CCP Games. The Korean game company disclosed to analysts that the EVE intellectual property brought in $16 million USD (₩18.9 billion) in the second quarter and $28 million for the first half of 2020. But the numbers themselves don't tell an interesting story unless put into some sort of context. 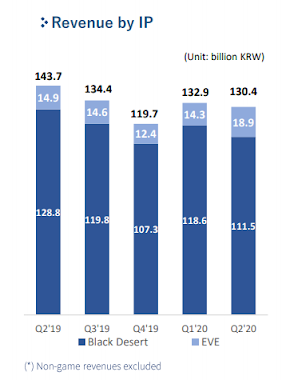 EVE's financial performance so far in 2020 is similar to that in 2015. Five years ago, CCP reported $58.6 million in game sales, which would have included revenue from DUST 514. If the Tranquility server maintains current activity and with two full quarters of revenue from China, EVE Online could conceivably exceed $60 million in sales this year.

While on the subject of CCP's financial history, perhaps a look at 2016, the last year we have a financial report before Pearl Abyss acquired the Icelandic company, is in order. In 2016, CCP received $81 million in game revenue as the company released two virtual reality games for the PC and PS4, EVE: Valkyrie and EVE: Gunjack. The EVE IP will probably not make that much this year, as EVE: Echoes was only released last week and still does not have a license to operate in China. But 2021 looks like the year the Icelandic studio could reach new financial highs.

On the same day Pearl Abyss held its earnings call for the second quarter of 2020, MassivelyOP published an article noting that Cloud Imperial Games had surpassed its fundraising total from 2019 of $47.7 million. As of the time of publication of this post, CIG has raised over $49 million this year, not including other sources of income like subscriptions. So unless EVE: Echoes does incredibly well over the next 4 1/2 months, Cloud Imperial Games with two games in alpha will exceed the revenue of the games under the EVE IP in 2020.

Okay, comparing EVE and Star Citizen is a bit of fun. The serious analysis involves how well CCP's games perform compared to what Pearl Abyss thought it was buying in 2018. CCP and EVE started off slow due to licensing issues for the Serenity cluster in China. But the intellectual property is growing now that EVE Online has access to China again. If CCP can continue revenue growth, then I think a lot of people, including players, will wind up rejoicing. We just need to know what positive revenue growth looks like.

Posted by NoizyGamer at 7:30 PM