Today is the end of August and I am finally writing about EVE Online's Monthly Economic Report (MER) for July 2020. Examining the July MER interests me for two reasons. First is the beginning of what may turn into one of the large conflicts involving tens of thousands of players that EVE is known for. The second is July is the one year anniversary of the beginning of Blackout, or as I like to call the event, Hurricane Hilmar. In today's post, I'll examine both the month over month changes wrought by the current political climate in null security space as well as comparing the year over year performance of the first month of the Blackout.

First, a look at the money supply in New Eden. The amount of ISK in the economy is still a major concern for CCP. Also, the Active ISK Delta is an indicator of players either leaving or returning to the game. A positive or slightly negative Active ISK Delta usually indicates a big event drawing players back to the game.

In July, the money supply decreased by 1.7%, from 1.346 quadrillion ISK on 1 July to 1.323 quadrillion ISK on 31 July. Looking back to July 2019, the amount of ISK in the game decreased from 1.337 quadrillion on 31 July 2019 to 1.323 quadrillion on 31 July 2020, a drop of 1.1%. I don't know what CCP's goal is for the size of the money supply, but I'm not sure the economy has reached that amount.
On the other hand, the Active ISK Delta doesn't indicate a flood of returning players come to either evict the dirty Goons from the game (or at least Delve) or to defend the Goonland. The -47.6 trillion ISK value in July was more than double the -21.9 trillion Active ISK Delta in July 2019. Perhaps August will present a truer picture of the situation.
Since war talk is all the rage, this month I'll start with destruction graphs. In order to break down where the destruction is occurring, the following bar graphs will use the data from the RegionalStats.csv files from the past 13 MERs. 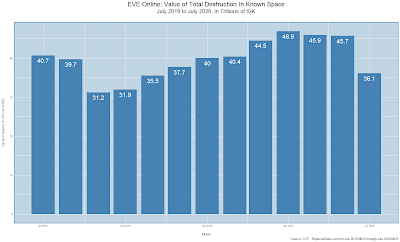 The startling fact is that despite a "world war", destruction outside of wormholes decreased by 21% in July. What gives? The answer lies in activity in Empire space, as destruction in null sec only fell by 1.8 trillion ISK, from 22.1 trillion ISK down to 20.3 trillion ISK. 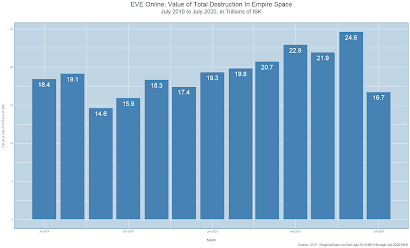 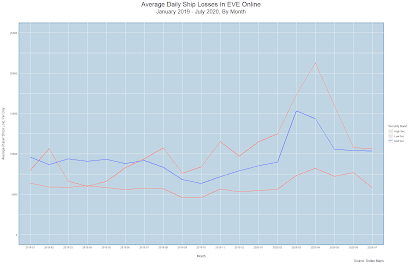 In July, the number of player ships destroyed in low sec fell by 24.9%, from 7712 ships per day down to 5791 ships/day. In retrospect, such a result was obvious. Besides the traditional activity slump in the Alpha/Omega era (average drop of 10.2% from 2017-2019), the big null sec war would have drawn pilots to null sec to participate in the fighting. Also, CCP held the first Abyssal Proving Grounds event from 16-28 July, pulling pilots out of low sec as well. Add in increasing interest in the Triglavian invasion event and low sec content apparently was not as interesting as all the new things in New Eden. 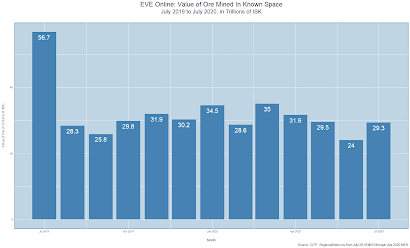 Mining has never recovered from the destruction caused by Hurricane Hilmar, as the above bar chart shows. The value of the ore mined in known space in July was only 51.7% of the 56.7 trillion ISK in ore mined in New Eden in July 2019. To make the comparison all the more remarkable, null sec was only hit by the communications blackout for the second half of the month. The lack of a recovery is a feature, not a bug, as the developers are presumably still in the "shortage phase" of their plan to fix the EVE economy.
Still, for the first time since March, the value of the mining output has increased month over month. In July, the value of mining increased by 22.1%. Some of the talk I've read and heard would lead people to believe a mass migration of null sec miners to high security space had occurred. If such a migration did happen, the movement began long before July. 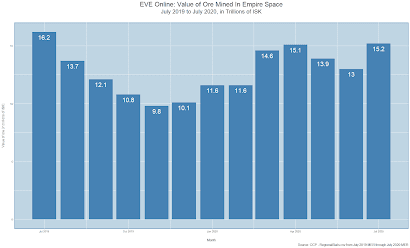 In Empire space, which in this case basically refers to high sec, the value of ore mined increased 16.9% month over month and 31% since January 2020. But in raw numbers, the value has only increased by 3.6 trillion ISK per month. That amount doesn't make up for the decreased mining in null sec. 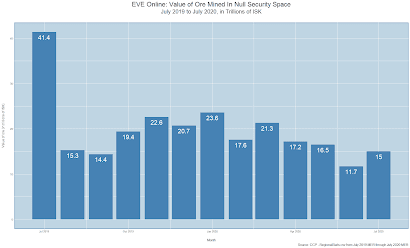 July 2020 saw null sec buck the long term decline of mining in null sec. The 15 trillion ISK value of the ore mined was a 28.2% increase compared to June. Compared to July 2019, however, the amount represented a 63.8% decrease in mining value. But as the profession began a comeback, CCP made further changes to keep mining under control in null sec. The effects show up on the above bar chart. July's 15 trillion ISK value is still 36.4% lower than the 23.6 trillion ISK mined in January 2020. 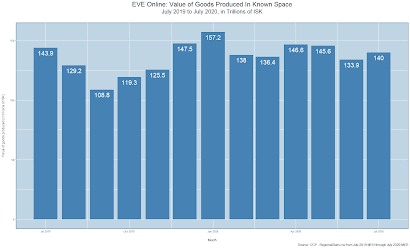 Accompanying the increase in mining was an increase in production. In July, industrialists outside wormhole space increased output by 4.6%. Unlike mining, production basically recovered following Blackout, although is down 2.7% compared to July 2019 and 10.9% less than the value of produced good in January. 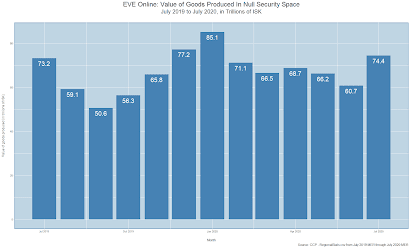 The possibly surprising development was a switch in where production occurred in July. Null sec production increased by 22.6% month-over-month, reversing a 5 months decline that began in January. Overall, null sec's share of production in New Eden grew from 45.3% up to 53.1%.
Before moving on to the economic indices, looking at the game's biggest ISK faucet, bounties, is in order. 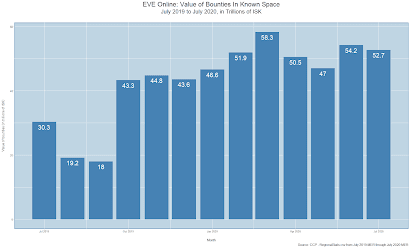 As usual, over 90% of bounties are collected in null sec. Perhaps surprising to some, the amount of ISK collected from CONCORD only fell by 1.5 trillion ISK. Half of the decline, 700 billion ISK, occurred in Empire space. Going back a year, players collected 73.9% more bounties this July as compared to the first month of blackout in July 2019. 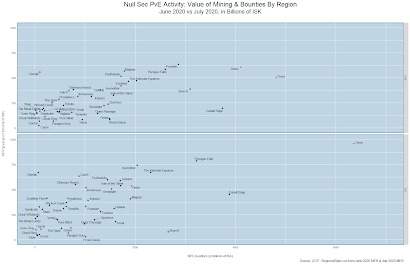 Looking at null sec specifically, the war has knocked Delve back into the pack of regions in terms of mining and ratting in July. The region that now leads null sec in both ratting and mining is Oasa, the Fraternity-held region in the Dronelands. 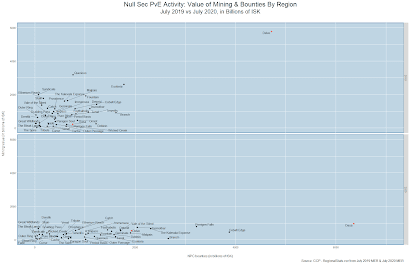 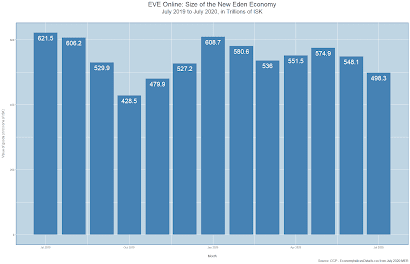 What was the result of all the player activity on the economy? Looking at the values of the indicies, the New Eden economy continues its decline since January. The economy in July dropped 9.1% from June. The economy never has recovered from Hurricane Hilmar, as July's economy was 19.8% below the value of the economy in July 2019. To highlight the decline of 2020, January's total value was 22.2% greater than July's. 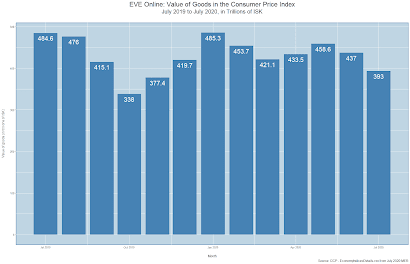 The only index I'll address in this post is the Consumer Price Index. The New Eden economy is a consumer-based economy. With the institution of a major war, one would expect an increase in ship destruction, resulting in an increase in ship, module, and ammunition sales. We did not see that in July.
The value of the CPI fell 10.1% down to 393 trillion ISK compared to June 2020. Not only was the value the lowest monthly total since November 2019, but is 18.9% below the value in July 2019. The natural followup question is: Is the drop due to RMT tokens like skill injectors & skill extractors? 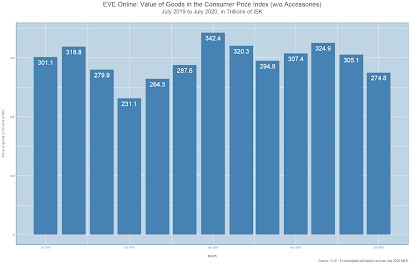 The answer to the question is "no". Even removing the accessories category (Daily Alpha Injector, Large Skill Injector, Multiple Pilot Training Certificate, Pilot's Body Resculpt Certificate, Skill Extractor, and Small Skill Injector), the value of the CPI still declined by 10%. On the other hand, the CPI without the accessories category only dropped by 8.7% compared to July 2019, indicating that much of the decline since the first month of Hurricane Hilmar was due to less demand & lower prices for the RMT tokens.
I took a deeper dive into the July monthly economic report than I usually do because of two events. First, the null sec war everyone is talking about. While having a major impact on Delve and a handful of other regions, the first month of the war did not result in a rising galactic economy. The second was the 1-year anniversary of the beginning of Hurricane Hilmar. Natural disasters like hurricanes can take years to recover from. According to the statistics in the MER, one year wasn't a long enough time for New Eden to recover.
Posted by NoizyGamer at 2:00 PM