Back in March, a kerfuffle occurred around CCP selling a package in the EVE Online cash shop that included a Retriever mining barge. The protests against selling internet spaceships directly for real world money like Star Citizen reached Twitch before finally subsiding. The protests faded when CCP Swift published an announcement CCP was pulling the Prospector Pack from the cash shop. His statement included the following passage.

One of the topics for Fanfest is a new project that we’re in the middle of developing, that will transform these and any future packs - a paradigm where packs of this type will be supplied by players, ensuring that any ship we offer to new players through sales, will have origins from actual player work in New Eden: Made for new players, by veterans. This feature will also not only supply each ship from the player base but allow the community to influence which ships will be put in these packs.

In effect, CCP intended to still sell ships for real world money, but would give players a chance to get a piece of the action. The move worked with selling ISK for money (PLEX) and skill points for cash (skill extractors/injectors), so why not ships?

At Fanfest CCP unveiled the heraldry system. In truth, they just announced an intention to create a new system that players might like. On day 1 of the event, we received a hint of what was to come.

HERALDING IN A NEW ERA OF IDENTITY AND SOCIAL INTERACTION

You will soon be able to display your unique identity and loyalty proudly on your ships and hangers through alliance logos, visual changes to your ships, holograms that reflect your social standings, killmarks, structure skins and other customizations attainable through InterBus credits, a new in-game currency.

InterBus credits can only be earned in game. They can never be traded between Characters, sold and do not have a fixed exchange rate to any other currencies.

A nice beginning, but watching the keynote, I had the feeling the new system would involve a bit of monetization. The day 2 news article went into further detail.

MORE ON HERALDRY AND INTERBUS CREDITS

The coming heraldry system lets you show off your achievements by displaying logos, visual changes to your ships, holograms that reflect your social standings, killmarks, structure skins and other customizations. You’ll be able to purchase those items with InterBus credits, which are earned by doing activities in-game. Those activities could be as simple as a daily challenges or events, or something more complicated. In almost every case, the activities will be focused on the social and interacting with fellow pilots.

To go along with this there’s a new unified fitting window coming that will combine heraldry and modules.

We’re also aiming to establish strong, healthy corporations, giving their members plenty of activities and goals, while providing more tools for corps to recruit, train and retain new pilots as they grow their member base.

We’ll also be helping corp leaders streamline their corp’s activities by making InterBus credits, taxable (though they won’t be tradable). We’ll also be giving corporations the tools to automate these arduous bookkeeping tasks with two optional taxes, LP Tax (on earned LP) and Value Tax (on sold goods on the market), in addition to the new Spreadsheets in Space tool mentioned in yesterday’s keynote that exports data directly from EVE into Microsoft excel.

This is all to help strengthen corporations in New Eden.

I think one of the most asked questions was: why not put these items in the cash shop? The answer came in the next section of the day 2 article.

MADE BY PLAYERS FOR PLAYERS

A new program will soon be introduced allowing you to manufacture or purchase items, making them available for other players to purchase. Players who participate will be rewarded with heraldry, which unlocks many cosmetic items that help you establish your individual and alliance identity in New Eden. This is all aimed to lean into EVE’s player-driven economy and provide more avenues to participate in the economy, and be rewarded.

Yes, the plan to sell spaceships directly from the cash shop became clear. Players would acquire or build ships and trade them for InterBus credits to get the sweet, sweet heraldry items. CCP will then sell the ships in the cash shop for real world cash.

I would really like options to obtain heraldry items without engaging in primary market real money trading. CCP is still working through what the system will eventually look like. I expect to hear something in 5-6 months from now. Hopefully CCP isn't too proud to look at other games for ideas.

I think my current primary game, Final Fantasy XIV, does a good job with its Free Company system. Free Companies (FCs) are FFXIV's name for guilds or corporations. The game has a version of InterBus credits called, simply enough, company credits.

Company credits are used to increase a Free Company's rank as well as buy perks for the FC and its members. Credits are earned by performing the following activities.

Basically, most any basic gameplay function an FC member does earns a free company credits. The system never shows player the credits they generate, so their is no sense of loss. Also, the system incentivizes FC leadership to maintain an active FC. The more active the FC, the more credits generated.

Players get more from the generation of company credits than the ability to put the FC's crest on their gear. FC leadership can purchase buffs that affect all members for 24 hours. The buffs range from increasing experience in combat, crafting, and gathering to buffing stats associated with those activities. Probably my favorite buff is the transportation buff that reduces fast travel fees by 20-40%, depending on the rank of the buff. That one buff can save players thousands of gil every week.

I realize CCP's effort is a work in progress, but I am concerned about this statement.

You’ll be able to purchase those items with InterBus credits, which are earned by doing activities in-game. Those activities could be as simple as a daily challenges or events, or something more complicated. In almost every case, the activities will be focused on the social and interacting with fellow pilots. [emphasis mine]

Focusing on the social and interacting with fellow pilots is CCP language for PvP activity. I get the feeling, especially since the beginning of 2019, that CCP would like people to play EVE a certain way. I fear people who shy away from PvP and don't join fair sized groups probably won't get much out of the new system. If those people leave the game, well ... CCP didn't want those type of players anyway.

I really hope that CCP follows the philosophy of FFXIV's Producer and Director Naoki Yoshida. Final Fantasy XIV tries to provide content for everyone, even PvPers. He decided to make the game more friendly to solo players in an effort to make FFXIV welcoming to more Final Fantasy fans. 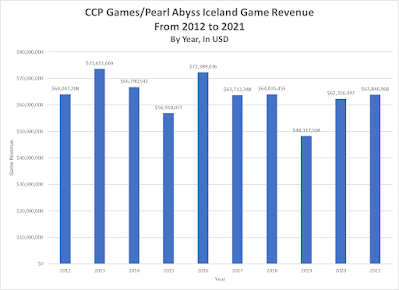 If Yoshida is still looking to reach out for more players, hopefully CCP will do the same. I know the top leadership of CCP thinks EVE should attract a certain type of player and wants to cater to those people. Hopefully certain important people learned with Blackout in 2019 that abandoning the so-called carebear is financially harmful. We'll find out with how CCP handles the new heraldry system.