EVE Muddles Through The Launch Of WotLK Classic

Last week I wondered how the launch of Wrath of the Lich King Classic would affect player activity on EVE Online's Tranquility shard. Would a highly disgruntled player base do what it did in 2019 when they flocked to play on the World of Warcraft Classic servers? Or was the disgruntlement overblown and would they stick around and fly internet spaceships?
To be fair, this year the developers offered players more than the *cough* awesomeness *cough* that was Blackout. On 29 September, CCP launched the Empire Frontiers patch which offered new story events in both the Caldari-Gallente and Amarr-Minmatar war zones. The event also offered early access to the 8 new faction navy ships that will appear in the Uprising expansion in November.
In addition, the Alliance Tournament season began on Saturday with the Trials Tournament. The Trials is a play-in tournament for the Alliance Tournament for those alliances that failed to automatically qualify for the main tournament. The last weekend of the Trials is the weekend of 8-9 October. 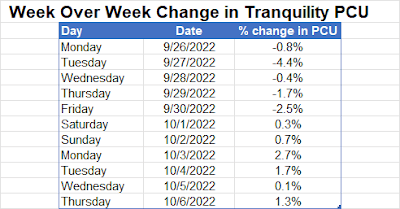 The big question though, is, did EVE Online experience a massive exodus with the launch of WotLK Classic? To answer the question, I looked at the week-over-week change in the number of peak concurrent users (PCU). For the first few days after the launch of WotLK Classic, the PCU did drop, although not precipitously. The largest drop occurred on the first full day the servers were open. Notably, the daily PCU never dropped below 20,000.
Then, a funny thing happened. Even before the first full week was out, PCU counts began rising. To me, a sign that the player dissatisfaction wasn't nearly as great as during Blackout. I guess you can't believe everything you read on the EVE Online sub-Reddit. Imagine that!

I don't want anyone to believe that I think EVE is in an entirely healthy state. As seen by the ACU chart above output by Ripard Teg, the concurrency numbers declined in September. While not unprecedented, a September decline is, to use the technical term, a bad thing. And while EVE survived the launch of WotLK Classic, CCP really needs to see the concurrent user marks increase in October. The developers are trying, but can they succeed? I think that's the question everyone wants to find out.
Posted by NoizyGamer at 6:00 AM