Something that is becoming something of a tradition at Fanfest is the Tweetfleet meet up the night before the convention begins.  I went last year and the bar, The Celtic Cross, was packed.  I decided while wandering around Reykjavik on Monday to go ahead and check the bar out before the huge wave of Eve Online fans arrived.

I got in early and was able to poke around and take some pictures.  Then a pair on Canadians, a pilot from Get Off My Lawn and his brother, came in and started playing a game that apparently is popular in the local bars.  For 1,500 ISK the bartender spun a wheel and where the wheel stopped is what they got to drink.

Their first try netted them 1 meter of beer.  One meter of beer turned out to be 13 rather large glasses of draft beer.  Not bad considering the typical beer wound up going for 900 kr.

Eventually more pilots came and went, with a few surprised that people were talking openly about things like Maelstroms.  That's one of the nice things about Fanfest.  People who usually only get to talk about Eve with people over Mumble or Team Speak get to actually talk to others face-to-face about internet spaceships.

After six beers, including one I won when I split a spin with the brother from Canada, I walked back to the Hilton, my trip a success.  I had successfully remembered how to find the bar, met some Eve players, had a good time, and had enough beer in me to help get my internal clock adjusted to local time. 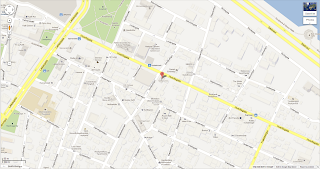