Mark my words: This is going to be a very interesting week in internet spaceships. #tweetfleet #EVEOnline
— CCP_Manifest (@CCP_Manifest) November 17, 2014


Yesterday, CCP Falcon posted some information on the EVE Online forums that affects multiboxers in general and users of the multiboxing software ISBoxer in particular.  First, he introduced three terms that will play an important role is defining a bannable offense.


Input Automation - refers to actions that are commonly also referred to as botting or macroing. This term is used to describe, but is not limited to, the automation of actions which have consequences in the EVE universe.

Input Broadcasting - refers to the multiplication of inputs, actions and events to multiple instances of the game that a player is currently runnning.

Input Multiplexing - refers to the multiplication of inputs, actions and events to selected multiple instances of the game that a player is currently running.

CCP already has a two-strike policy in place for those who engage in input automation.  The first offense is a 30-day ban with a permanent ban in place for the second offense.  The only exception is if the input automation involves client modification techniques such as python injection.  In that case, the user receives a permanent ban for a first offense.  The news in CCP Falcon's post is that, starting on 1 January 2015, those engaged in input broadcasting and input multiplexing will also receive the same punishments as the botters and macroers.

Not all input broadcasting and input multiplexing will result in action by CCP.  CCP Falcon gave examples of what is and is not allowed:


Input Broadcasting and Input Multiplexing of actions with consequences in the EVE universe, are prohibited and will be policed in the same manner as Input Automation.

This includes, but isn’t limited to:


Examples of allowed Input Broadcasting and Input Multiplexing are actions taken that do not have an impact on the EVE universe and are carried out for convenience:


One of the members of Team Security, CCP Random, tweeted out a useful flowchart explaining the new rules. 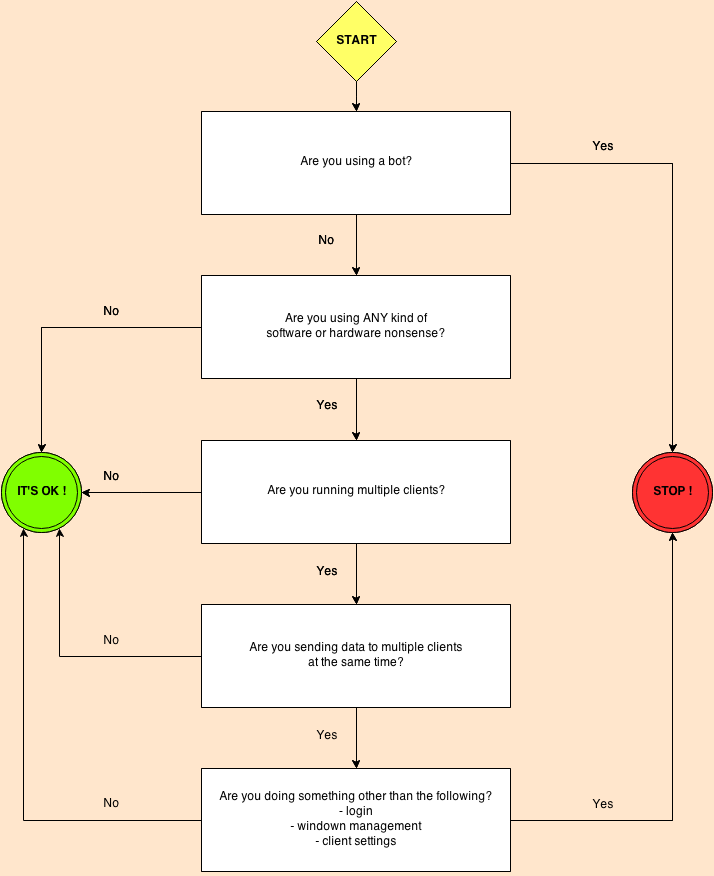 I found a video of a player engaged in input broadcasting/input multiplexing on YouTube to demonstrate.

The video above shows a player using ISBoxer to run a fleet of 12 Nightmares and a Basilisk through a Vanguard incursion site.  The real life monetary figure in the title of the video is the conversion price of a PLEX in 2013 and not the value on the secondary RMT market, which was a lot lower, even back then.

A lot of people believe that multiboxing requires software, a perception that some ISBoxer users spread.  But that is not the case.  CCP Falcon defined multiboxing as, "playing as multiple separate characters, simultaneously, across a number of accounts, either by using multiple computers to run the game, or by using a number of instances of EVE on a single computer."  So for example, if someone comes up with a hardware method of input broadcasting, that is also banned beginning on 1 January.

However, the software everyone is talking and posting about is ISBoxer.  Joe Thaler, the owner of Lavish Software and creator of Inner Space, posted an explanation of what he thinks the rule changes mean for ISBoxer:


"This is sad news for ISBoxer users in EVE.

"The good news is that they do stress that 'multiboxing is allowed' as long as you don't do this. It does sound like you can still use Video FX dashboards for example as long as you are interacting with a single client at a time and not activating a module on 50 different ships at the same instant. Broadcasting Mode should not be used except when changing client settings or logging in, beginning January 2015."

Basically, the ability to display multiple clients without overlap and the ability to cycle through the clients will serve as ISBoxer's main selling point starting next year.  Thaler posted in a Reddit thread reinforcing this view:

"Hi guys, author of ISBoxer here!
"This is of course sad news for multiboxers in EVE Online, but I think there's more to be said than simply 'RIP'.
"Multiboxing will still happen, but without broadcasting to multiple clients at once. This is more sad to someone like TheWis with 80+ accounts, or even someone with 10, than it is to someone with 2 or 3. I think we would all agree that 2 or 3 is a more appropriate number to be playing than 80, and I think that's the effect this change will ultimately have.
"The good news is that it does sound like ISBoxer users can still use dashboards with clickable views of modules lined up, as long as they are interacting with only one client when they click, and not several at once.
"With that said, it looks like I have just over a month to figure out how to help my customers not get banned from this change."

I have a couple of comments about Thaler's Reddit post.  First, I don't think that the news was sad for all multiboxers, just those who use ISBoxer or run their own macros to assist in multiboxing.  For those who, like myself, dual or multibox without software assistance and just tab between clients or have multiple client windows visible, the new policy doesn't affect us at all.

The other is Thaler's claim that "2 or 3 [accounts] is a more appropriate number to be playing than 80."  First, especially for mining, why would a player need to use ISBoxer when running only two or three accounts?  I don't see the value in paying the license fee for so few accounts.  The second involves the old adage, "follow the money."  An Inner Space license is good for up to five PCs (or virtual machines), which means that whether a user runs five accounts or fifty, Lavish Software receives the same amount of money.  So Thaler can sound agreeable to CCP's concerns as that doesn't hurt his bottom line.

While many ISBoxer users are outraged on the official EVE forums, some users on Dual-Boxing.com are more sanguine.  A user named Lord's Servant sent out the following mail to his corporation:

This does NOT affect us as much as everyone thinks it does. This only affects us in regards to convenience - there are workarounds for the few things that we use broadcasting for. These are not much more difficult, and EVERYTHING that WE do (can't speak for all multiboxers in general) is going to be largely unaffected.

Stay off the forums (unless you're reading them for tears), enjoy the PLEX prices tanking (fuck yeah), and stay tuned for detailed info on how we will be slightly changing our setups.

What we will need to do before these become final:

-REMOVE all Repeater Regions from Setup
-Don't use (I'll ask lax [Joe Thaler] to just remove it from the default eve architecture) the broadcast all key.

What is NOT happening:

-The sky falling.
-Isboxers dying out
-Our corp dying
-Our playstyle changing drastically.

So what's the truth?  Are the changes the end of ISBoxer in EVE and Thaler is just spinning like a top?  Or will ISBoxer evolve and adapt to the new environment?   Instead of answering those questions now, I'd like to look back at some questions I raised back in August about the health of the game.

First, will the change open up content to more players?  If the ISBoxer-run ice harvesting, mining, and incursion fleets either go away or the numbers are greatly diminished, will that make other players happy because they have easier access to content?  I'm pretty sure the answer is yes.

Next, how does EVE need to change in order to accommodate ISBoxer?  The answer is that EVE won't change, ISBoxer needs to.  I'm really happy about that.  When I started playing EVE, one of the draws was no in-game mods like in World of Warcraft.  I was really disappointed when software primarily used for multiboxing in WoW started showing up in EVE.  Now, I feel better about the direction of the game.

Taking my concerns a little out of order, I really wondered what the effect ISBoxers have on the PLEX market.  With the incredible earning potential of ISBoxer fleets, I believe that ISBoxer users were less sensitive to rises in the price of PLEX than the average null sec line member.

The movement of price of PLEX from an average sale price of 945 million ISK on 24 November down to offers under 890 million ISK by the end of yesterday was, in my judgement, a panic move as speculators determined that the demand for PLEX will decline as ISBoxer users leave EVE.  I do think that, as ISBoxers leave EVE for more friendly pastures, the ISK price will drop.  However, I don't think that will result in a drop in volume of PLEX traded, as players who were priced out of the market and had to drop accounts in the past will reactivate those accounts as they gain the ability to afford PLEX again.  In other words, I do not believe CCP will see a negative financial impact from the move.  The accountants don't care how much PLEX are sold for in ISK, just that the PLEX sell and are consumed.

Finally, I wondered back in August whether CCP was more interested in gaining actual players or if they were returning to the mindset that more accounts is better, no matter what.  I don't know if CCP Falcon represents the thinking of CCP's management, but his post in the Reddit thread yesterday gave me hope:

"My personal opinion on this question is that I value the integrity of the game, and its overall health more than I value the numbers.

"I'd rather see 1 person playing with 19 of his friends, than 1 person using software or hardware to play solo while input broadcasting to 20 accounts.

"EVE is a game based around interaction with others, and the action and reaction that comes from it.

"Well, that's my personal take on it, at least."

Honestly, I was surprised when I found out that input broadcasting and input multiplexing were not explicitly listed as bannable offenses in the EULA, Terms of Service, or Third Party Policies.  I feel the change in policy is long overdue.  As I've stated many times in the past, people will accept losing to other players, but hate losing to software.  Hopefully, CCP's change in stance on input broadcasting will remove some of the frustration players feel in EVE and make New Eden a better place to spend a few hours.
Posted by NoizyGamer at 6:00 AM