I realized that throughout the years spent writing about illicit real money trading in EVE Online, I neglected the engine that allows the black market1 to operate: the buyer. Without the demand for cheap ISK, PLEX, characters, and so on, the illicit RMT operations would not exist. I initially began a research project aimed at determining the effect of Aegis sov (aka FozzieSov) but decided to kill two birds with one stone and focus on buyer trends at the same time.


My data comes from a major real money trading site, PlayerAuctions.com. I'm not worried too much about giving the site additional exposure from my small blog. First, the site comes up near the top of searches for "Eve Online isk". Next, the site pops up in scholarly research papers like those written by Richard Heeks of the University of Manchester and Wayne Rumbles from the law faculty of the University of Waikato. The site has appeared in news stories in The New York Times and on the BBC. Zynga even sued PlayerAuctions back in 2010.

What PlayerAuctions provides researchers is a feedback system that allows the tracking of individual purchases of ISK and other virtual items. In July, I tracked a total of 1.77 trillion ISK sold by stores on PA. I recorded information from 140 reviews covering the purchase of 1.53 trillion ISK, or over 86% of the ISK sold on the site. I'm confident I can draw some conclusions about the patrons of the site, if not the customers of the EVE Online secondary RMT market as a whole. 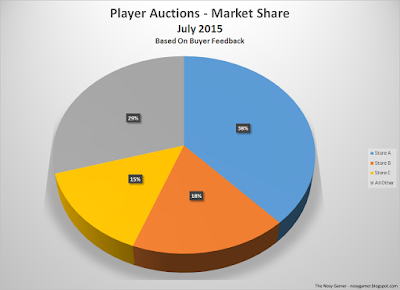 The first graphic concerns the three most popular stores on PA. Store "A", with 38% of the ISK sold, is basically a wholesaler. During July, the store sold the cheapest ISK, but only in amounts of 10 billion ISK or more. Notably, Store "A" was the last seller to sell ISK at the old $10/billion hazard discount price.

Store "B" (18% market share) followed a middle-of-the-road pricing policy. The seller was the top store on PA for a time in 2014, but fell out of favor with PA members when Store "B"'s customers started receiving ban letters from Team Security.

Store "C" (15% market share) acted like a premium brand, boasting of selling 100% safe ISK. While the seller maintained a reputation of selling safe ISK, it could get away with selling pricier ISK. But during the month of July, Store "C"'s customers started receiving ban letters from Team Security.

Once word got around, business really slacked off and cost the store hundreds of dollars in lost sales. 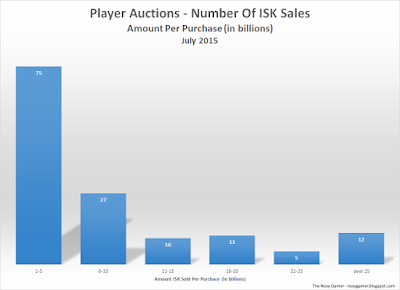 One big question I had was how much ISK does the average buyer purchase. The median amount of ISK purchased in July was 5 billion ISK, with 30.7% of the orders for only 1 or 2 billion ISK. 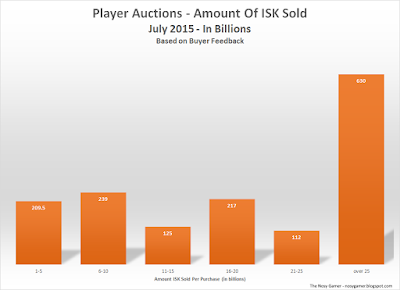 On the other hand, the whales came out in force in July, placing two orders large enough to fund the acquisition of titans. Overall, 12% of orders accounted for almost 48% of the ISK purchased on PA during the month. 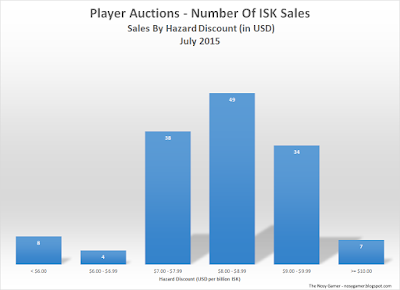 July was the first month in which the average price of PLEX sold in Jita never dipped below 900 million ISK. In U.S. dollars, the price dropped from $18.95/billion ISK to $17.61/billion at the end of the month. As the price dropped, some of the buyers didn't watch and kept patronizing familiar stores. EVE players not min-maxing their costs? Strange but true. But I think the median discount of $8.45/billion ISK is in the neighborhood of where the discount will wind up as long as nothing drastic happens with PLEX. 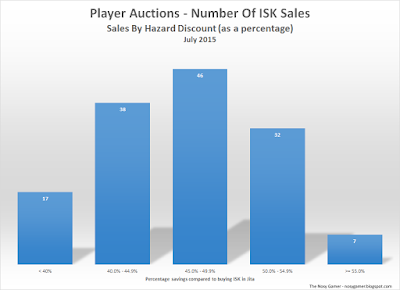 With the price of ISK so low, I hypothesize the price will eventually stabilize around 50% of the price in Jita. In July, however, the purchases looked more like a bell curve rather than clustered around a single point. The median discount was 46.6%. 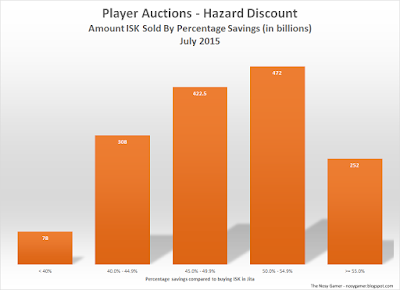 While the individual purchases wind up all over the map, the amounts of ISK purchased grew as the discount rose. In the above bar graph the only reason that the over 55% did not sell more is that Store "A" implemented a rate increase in the middle of the month.

Perhaps the biggest question is how much real life money does a player have to save in order to feel risking a one week ban on all of a player's accounts is worth it. The median amount of money ISK buyers saved per purchased in July was $42.13 USD. But that's the median amount. As I mentioned above, 30.7% of transactions involved the sale of only 1 or 2 billion ISK, meaning those people only saved $7-$20 USD. Is saving the cost of a PLEX, less if only buying 1 billion ISK, worth the risk of losing 1 week of training on all of a player's accounts? Apparently so.

That's a quick rundown of the highlights I found wading though the data provided by Player Auctions. Yes, publishing the results a month late is deliberate. While interesting, providing up-to-date market information could help the black market ISK sellers too much, so I'll continue publishing these posts about 4 weeks after the end of a month. But I do need to publish monthly, because otherwise the posts become too long. Hopefully everyone will find these as interesting as I do.

1.  I realize that some will object to the term "black market" in referring to the secondary market in EVE Online virtual currency and goods. However, since illegal activities such as hacking and credit card fraud do in part supply the stock for some of the sellers, I'll continue to use the term.
Posted by NoizyGamer at 6:24 AM