Who Really Killed Empress Jamyl I?

On Friday, in a major lore event, the Drifters destroyed an Avatar class titan piloted by the Amarrian empress, Jamyl Sarum I, was attacked and destroyed by a Drifter fleet in Safizon. A kill report also indicated that the Drifters managed to pod Jamyl as well. The Scope broadcast a report minutes after the attack.

At 2214 on 21 August, a report from Hedion, home of the headquarters of the Court Chamberlain Bureau, reported that the empress was dead.


HEDION – After receiving a statement from Lord Pomik Haromi, Court Chamberlain of the Empire, Amarr Certified News has publicly confirmed the death of Her Royal Highness, Empress Jamyl Sarum I.

En route to formally commission the Amarr Navy’s new Imperial Issue Abaddon class flagship TES Auctoritas, and welcome her to The Throne Worlds Defence Fleet, Empress Jamyl and her Imperial Guard escort were ambushed in the system of Safizon as they arrived.

The assault on the Amarr Navy, which saw the destruction of the Avatar class titan TES Seraph, piloted by Empress Jamyl, is believed to be the largest and most costly loss of military hardware that the Imperial Armed Forces have suffered in over a century.

In the statement, released just moments ago, Chamberlain Haromi confirmed that Empress Sarum was “killed in action, defending God’s will, God’s chosen, and His Empire” before paying tribute to her “extraordinary strength, selflessness and humility before the watchful gaze of God.”

With tributes already pouring in from across the Empire as billions of Imperial Citizens flock to their places of worship, and messages of condolence arriving from heads of state across the cluster, Chamberlain Haromi reassured the Amarr people that “the Imperial Armed forces are on full alert, and will stay that way until such a time as the Court Chamberlain is satisfied that a stand down is necessary.”

Speaking before the Imperial press, the Chamberlain concluded the statement by saying that “All branches of the Imperial Military have been instructed that their primary objective is the defence of the Empire’s borders, her people, and God’s will.”

After the statement, the Office of the Court Chamberlain confirmed that handover of leadership from the Emperor Family to Chamberlain Haromi was completed less than an hour after the confirmation of the death of the Empress, and that his first actions were to place the entire Amarr Navy on high alert and call the heads of all branches of the Imperial Armed Forces and the Imperial government to Dam Torsad.

It is expected that in the coming hours, the leaders of the Ministry of War, Amarr Navy, Ministry of Internal Order, Imperial Chancellor, Theology Council, 24th Imperial Crusade and representatives of the Imperial Heirs will meet to assess the situation.

On Saturday, another dispatch from The Scope, this time from Yulai at 1355 on 22 August, reported on the reactions of CONCORD and the other major empires of New Eden.


YULAI – Emergency diplomacy following yesterday's assassination of Empress Jamyl I by a Drifter strike force has been ongoing throughout the day, with the CONCORD Assembly's Cluster Security Committee in continuing session. A spokesman for CONCORD's Inner Circle stated that, "CONCORD assets and DED fleets have been placed on the highest state of alert since the Sansha's Nation Abductions Emergency of YC112."

The spokesman went on, "While the Inner Circle is shocked and saddened by the death of Empress Jamyl I, our foremost concern is the ongoing security of the New Eden cluster. We will remain vigilant and attentive to our primary mission during this developing situation. Naturally, the Drifter threat is our highest concern at present."

In the Caldari State, the Chief Executive Panel has expressed its "deep regrets and condolences to the Amarr people." The CEP's official statement described Empress Jamyl as "a figure of great importance to the friendly relations between State and Empire, who will be missed by all State and Corporation citizens. We mourn her and commend her spirit to its lasting and final place."

The Caldari Navy has been placed on alert along State borders and Megacorporation security forces have been mobilized for "purposes of maintaining the internal security of state and corporate assets given the clear danger from the Drifter entities."

President Jacus Roden of the Gallente Federation met with his cabinet, military advisors and leading Senators before addressing the Federation by domestic GalNet broadcast. In his remarks, President Roden praised Empress Jamyl as "a deeply impressive leader who in my dealings with her was always clear where she stood in the interests of her people and the Amarr Empire."

President Roden went on, "Of course, I differed with her and the policies of the Amarr Empire on many, many points but I can say that she was a positive force in containing our ongoing conflicts. On behalf of the Gallente Federation and People, I offer my deepest condolences to the people of the Amarr Empire." Federation Navy forces are reported to have been moved to invasion defense positions throughout Gallente space and the FIO has confirmed its special reconnaissance forces have been dedicated to monitoring Drifter activity.

Emerging from a secure session of the Tribal Council, Sanmatar Maleatu Shakor of the Minmatar Republic made some brief remarks to the press, "I have consulted with the Tribes and we have taken the best advice on the security situation. It is our judgement as a Council that the Tribes face no immediate danger from the so-called 'Drifters'. We are dismayed at the ability of these entities to penetrate the security of a major power and it is always destabilizing when a head of state is violently removed. We are most concerned that our enslaved brothers and sisters not suffer even more during this time of uncertainty in the Amarr Empire."

Elsewhere in the Republic there has been less restraint with scenes of jubilation reported on the streets of Minmatar cities. Questioned about the large crowds celebrating the death of the Empress, Sanmatar Shakor declined to comment. Chief Tenerhaddi Dykon of the Krusual was less reticent, declaring, "Why should they not rejoice? I am rejoicing as I would rejoice at the death of a rabid slaver hound."

Now, why am I pointing out the times of these reports? Because I heard rumors that Jamyl was not dead. I decided to contact an agent of the Republic Fleet and received this reply at 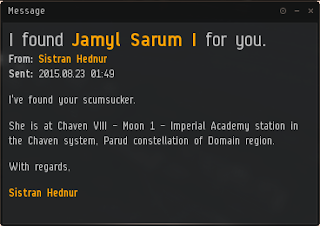 That's right, Jamyl was spotted alive in Chaven, one of the newbie systems, over 24 hours after the initial reports of her death. I should point out I was not the first to think to run a locator agent on the Empress.


I contacted Sistran again early this morning to find Jamyl's current location and received this response. 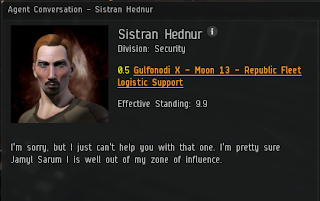 This is the response one gets from locator agents when a character is logged out. I didn't feel like creating and biomassing a character to find out if this message is the same for deleted characters as well. My guess is yes.

On yesterday's Hydrostatic Lore Panel, CCP confirmed that Jamyl is dead. Apparently, people believing that Jamyl is still alive is a sore spot with one of the hosts, Ashterothi.

On the Lore Panel, CCP Affinity stated that Jamyl is "a corpse in a mysterious location," which actually helps confirm some tinfoil thoughts I came up with before listening to the recording of the stream. According to all of the in-game information I have gathered, the Drifters did not kill Jamyl. If my reading of the reports from Sistran are correct, she died sometime on Sunday, not Friday. So the question is, how did Jamyl really die and what did the killers do with the body?
Posted by NoizyGamer at 5:39 AM