Developing A Story Around NPC Standings

I have to admit I was a bit sad back in May 2011 when CCP removed the ability of people to look at another player's "Show Info" tab and see a player's standings with NPC corps. Sure, doing so may have reduced lag. I can understand not wanting to easily identify for gankers which agents a player frequents. Removing the standings also meant that spies could more easily infiltrate corporations because recruiters couldn't just open up the "Show Info" tab and find out if the spy actually ran missions. But for the first year-and-a-half of playing, I determined which missions I ran and with who based on the NPC corps and what my activities in the game said about my characters. 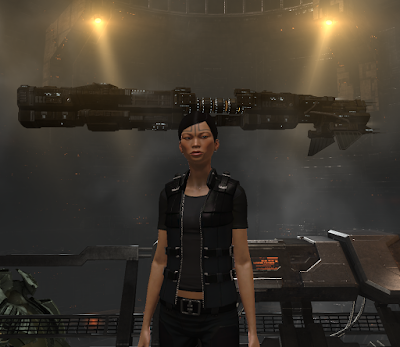 Let's take Wandering Rose, the CEO of my personal corp, as an example. I wanted the corp to have access to jump clones, so that meant a standings grind. But what NPC corp? Since I knew I wanted Wandering Rose to fly blockade runners, I wanted something legitimate, but still a little shady. What I came up with was a little corporation called Eifyr and Co. located not too far from Wandering Rose's starter system.


"Founded shortly after the Minmatar Republic’s establishment by the renowned, yet enigmatic, biochemist Kolvil Eifyr, the Eifyr and Co. corporation swiftly became a potent force in the biochemical and cyber-implant industries. Backed by investment from the shrewd leaders of the Krusual Tribe and steered by Eifyr, the corporation remains a lean, relatively small, but highly efficient powerhouse. However, its emphasis on secrecy and rumored connections to the Minmatar underworld have fuelled speculation as to how the company really makes its money. The most persistent rumors and occasional accusations have centered on allegations of illegal booster manufacturing and secret contracts with the Serpentis Corporation. Whatever the truth may be, none of the investigations mounted against Eifyr and Co. have ever uncovered concrete evidence of wrong-doing, and no prosecution has been attempted to date.

"For much of its history, Eifyr and Co. pursued relatively mundane biochemical manufacturing and distribution on the open market, while its cyber-implant division developed and released popular ranges of gunnery and propulsion implants for the lucrative capsuleer markets. When the SCC deregulated markets with regard to boosters, and the possibilities of synth boosters came to light, Eifyr and Co. were immediately ready to take advantage and began offering biochemical reactors and other equipment vital to booster manufacturing on the open market. The corporation also released new implants designed to enhance booster uptake and alleviate adverse reactions, leading to a resurgence in speculation regarding links to the underworld booster rings. Many observers asked how Eifyr was able to swiftly and effectively respond to the booster deregulation.

"The widespread emergence of unstable wormholes and the technological possibilities opened by these phenomena is the most recent opportunity seized by Kolvil Eifyr's remarkable corporation. Eifyr and Co.'s expertise in chemical reactor technology was swiftly adapted to the newly emerging polymers derived from wormhole space gas clouds. Additionally, Sleeper technology became a particular interest of the corporation. Today, Eifyr and Co. acquires Sleeper-related data in a variety of forms primarily from capsuleers, who encounter the ancient civilization’s drone guardians in wormhole space."

Apparently I was not the only one interested in Eifyr and Co. In 2011, Hilen Tukoss defected from the Caldari to the Minmatar Republic and began working for Eifyr and Co. on the Arek'Jaalan project. But the corporation is involved in something deeper.

In the above montage of decals festooning the Stratios, notice the logo in the upper right-hand corner? That's right, Eifyr and Co. So of course I had to go out and do a standings grind for the Sisters of EVE. Not only to get some cool cloaky ships, but because something sneaky was going on. My standings with the Sisters of EVE currently sits at 9.83 and with the Servant Sisters of EVE faction a healthy 8.24.

Of course, anyone engaged in not-quite-legitimate business might want to get on the good side of those who could interfere. People like the Republic Parliament (9.99) and the Republic Fleet (9.92). Compared to those two organizations, the 7.67 standings I have with the Republic Justice Department seems a bit distant. One particular NPC corporation I had to acquire good standings with was the Republic Security Services.


"The Minmatar learned early on in their freedom that it can only be kept by wrapping it in secrets and deceit. The vigilance of the Republic Security Services has helped the Republic weather many storms that threatened to engulf the fledgling state. The RSS has strong links with the underworld elements in the world of New Eden, the information exchange and black marketing strengthens both sides."

So I have great standings with the Minmatar Republic and two of the movers and shakers in the Thera story, the Sisters of EVE and Eifyr and Co. But no one will know because our standings are hidden. I know, I still have my story running in my head. The story isn't as grand as some of those in null sec or faction warfare, but I like it. I just wish I could show off the standings I have, as that is the only concrete thing I have to show the work I put in to make my story come to life in the game world.