"You may not use Cheats, automation software (bots), mods, hacks, or any other unauthorized third-party software, to modify or automate any Subscription Marketplace process."


The fallout of the Counter Strike: Global Operations gambling scandals picked up steam after the filing of the second class-action lawsuit against Valve in Florida on 1 July. The plaintiff modified the filing on 7 July to include CSGOLotto, Trevor “Tmartn” Martin and Tom “Syndicate” Cassel following the revelation the two popular YouTubers also own CSGOLotto. On Wednesday, Erik Johnson, one of Valve's business development authorities, posted the following announcement on Steam:


"In 2011, we added a feature to Steam that enabled users to trade in-game items as a way to make it easier for people to get the items they wanted in games featuring in-game economies.

"Since then a number of gambling sites started leveraging the Steam trading system, and there’s been some false assumptions about our involvement with these sites. We’d like to clarify that we have no business relationships with any of these sites. We have never received any revenue from them. And Steam does not have a system for turning in-game items into real world currency.

"These sites have basically pieced together their operations in a two-part fashion. First, they are using the OpenID API as a way for users to prove ownership of their Steam accounts and items. Any other information they obtain about a user's Steam account is either manually disclosed by the user or obtained from the user’s Steam Community profile (when the user has chosen to make their profile public). Second, they create automated Steam accounts that make the same web calls as individual Steam users.

"Using the OpenID API and making the same web calls as Steam users to run a gambling business is not allowed by our API nor our user agreements. We are going to start sending notices to these sites requesting they cease operations through Steam, and further pursue the matter as necessary. Users should probably consider this information as they manage their in-game item inventory and trade activity."


The statement itself is a bit misleading. While Valve may not have direct, contractual business relationships with the gambling websites, one cannot state Valve did not profit from the existence of the CS:GO gambling scene. Skin betting sees billions of dollars of skins wagered each year, with an estimated 85% of all betting related to CS:GO.


"'Without the item economy Counter-Strike would be smaller. We would likely be at a level slightly above that of late 2013, and one similar to the peak years of Counter-Strike 1.6. There would be less money, no Valve-sponsored majors, and no one-million-viewer grand finals,' says Kovanen, who contributes to PC Gamer. 'In hindsight, the addition of the skins has been the most important development in CS:GO's history, bar none.'"

From August 2013, when Valve introduced skins, until the Bloomberg Business article came out in April 2016, the average daily concurrent user figure rose 1347%, from 25,962 to 375,796. And a significant part of this growth is attributable to skin gambling.


"And despite match-fixing incidents made possible by item gambling, most people in the scene will tell you that the addition of weapon skins has been extremely positive. '[Skins] have allowed for large betting companies and sites to be founded and existing ones to begin pouring money into the game,' says Kovanen. 'Most importantly, beyond the visual improvements and the fun that is betting, it has made Counter-Strike incredibly much larger—it's been proven viewership grows exponentially when betting is available, and therefore the game as a whole would be a lot worse off without the item economy that has allowed for the game to flourish.'"

The author of the PCGaming article even gave the introduction of skins and popularity of CS:GO as an eSport credit for the improvements the game received over the past couple of years.


"But even players who are indifferent, or even critical of the way skins have altered a once-pure competitive game have benefited from their introduction. The wave of attention has encouraged Valve to make significant improvements to CS:GO. An influx of new players brought more cheaters (even in the higher levels of competitive play), but Valve has done a lot more to mitigate and ban them. Classic maps like Train that were initially flawed in CS:GO have been reworked. And although CS:GO's tournaments don't yet reach the pomp and level of reward as The International, Valve puts up $250,000 for multiple majors throughout the year."

Doing the research for this post, I saw criticism that Valve did not immediately shut down the gambling website's access to the OpenID API required to make gambling a viable proposition. For those engaged in tinfoil theories, one could make the argument that Valve actually does have contracts with the gambling sites and needs to wait a specific period of time after notifying the sites of any changes, like denying access to the API system, before implementing said changes.

A more likely answer is that Valve plans to follow the terms of the Computer Fraud and Abuse Act. By a strange coincidence, the U.S. 9th Circuit Court of Appeals issued a ruling in a very important case, Facebook v. Vachani, that could apply to the current situation involving Valve.

As I am not a lawyer in real life, I found someone who knows a thing or two about the law, including arguing cases before the U.S. Supreme Court. Professor Orin Kerr is a a former trial attorney in the Computer Crime and Intellectual Property Section at the U.S. Department of Justice who writes on The Volokh Conspiracy blog published on The Washington Post and wrote about the case Wednesday. Professor Kerr summarized the facts of the case as follows:


"Steve Vachani is the chief executive and founder of Power Ventures, which had a website at Power.com. (I’ll refer to Vachani and Power Ventures collectively as “Power.”) Power had a service that let users aggregate their contacts on different social media sites. Power’s software allowed Facebook users to authorize Power to go into their Facebook accounts and gather information for them for use at Power’s website. Power users also authorized the software to send Facebook messages to other Facebook users for them. Facebook didn’t appreciate this, and it sent a “cease and desist” letter to Power telling the company to stop. The cease-and-desist letter told Power that it was violating Facebook’s terms of use and warned Power that it may have violated federal and state law. Facebook also blocked Power’s IP addresses. Power just changed IP addresses and continued operating."

Does the case sound similar to what Valve may need to do to keep the gambling websites from accessing their site? Professor Kerr disagreed with the judge's decision, but came up with a summary that gamers may find interesting:


"This is an important case. This was a civil dispute, but the CFAA is also criminal statute. If read broadly, the case seems to say that if you want to make it a crime for someone to visit your website, you just need to give them notice that you don’t want them to visit. I gather that as long as you phrase the notice as a command to cease and desist, rather than as just general terms of use, it becomes legally binding."

Now, if Professor Kerr is correct, either the full 9th Circuit Court of Appeals or the U.S. Supreme Court will eventually overturn the ruling. But the law does give a site owner a powerful incentive to contact violators instead of just cutting off access.

Apparently, letters from lawyers work as Polygon documented several gambling sites that closed. Among them were CSGO Double... 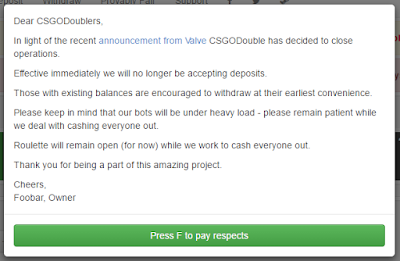 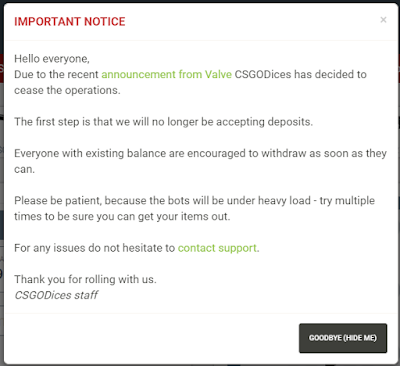 One site that did not close is OPSkins.com, the real money trading site that converts skins into real world currency. The owner posted the following statement on Reddit:


"OPSkins was founded in 2015 as a safe and secure marketplace for people to buy and sell their digital items. As active gamers ourselves, we personally understood the challenges and risks of trading valuable digital items with unverified third parties. Sellers risked chargebacks, and buyers risked non-delivery of the item they just purchased. We believed a better solution was both necessary and possible. With OPSkins, our customers have successfully completed millions of transactions over the past 2 years without issue. We appreciate the trust our community has placed in us and we strive every day to exceed your expectations.

"As our community is well aware, OPSkins is not and never has been a gambling website. Some recent media articles concerning the lawsuit against Valve Corporation alleging underage gambling with CS:GO skins have incorrectly labeled OPSkins as a gambling site. That is clearly not correct. OPSkins is a digital item marketplace - a platform that responsibly connects buyers with sellers of in-game virtual items.

"With Valve's recent announcement that it will no longer allow gambling websites to access the Steam API, we have received a number of inquiries from our community regarding how this new restriction will effect OPSkins. We have received no communication from Valve that OPSkins access to the Steam API will be blocked or limited in any way. Furthermore, based on Valve's recent public statement, we do not anticipate any disruption in our trading services.

"Should there be any change to this situation, we will promptly notify our community members. As we have done since our founding, we promise to continue exercising the utmost care in handling your valuable item inventory and deposits.

"Finally, some of you have asked if there is anything you can do to ensure that OPSkins continues to provide its valuable trading services to the Steam Community. We appreciate your support and we welcome any public expressions of confidence and trust OPSkins has earned with you over the past 2 years."

Besides addressing a bit of tinfoil, the real reason for bringing up the Computer Fraud and Abuse Act and Facebook v. Vachani is the OPSkins statement. Despite the explicit prohibition against using automated bots in association with Steam Marketplace, OPSkins is pointing to Valve's statement singling out gambling sites for non-compliance with Steam Marketplace rules. If Valve truly wants OPSkins to stop, the company will need to send the RMT company a cease-and-desist order. Valve can't just cut off access as that would lead to tens of thousands of unhappy customers.

Will Valve's lawyers send that letter? I doubt they will. What most of the journalists overlook is that the gambling operations could not exist without a strong secondary real money trading market. Sites like OPSkins provide a trusted, secure way to allow players to withdraw money from CS:GO's virtual economy into their PayPal accounts. Is Valve really going to kill the RMT sites that allow CS:GO to thrive? I guess we'll find out.
Posted by NoizyGamer at 6:00 AM