I spent a lot of time reading and listening to news about the release of the CSM summit minutes Friday. Over on the INN Twitch channel, The Open Comms Show, Talking In Stations (available on Soundcloud), and the Whiskey Gaming Show all tackled the subject, with CSM members Jin'taan and Noobman appearing on the first two shows. I also appeared on the Naked Trading in Albion show yesterday with Roedyn and Caleb Ayrania discussing real money trading. Add in some mining in low sec and I spent a lot of time involved with video games this weekend.

The most significant time, though, involved reviewing and updating fittings on three ships. I recently had the computer that had all my pyfa fits stored on it die and I'm in the process of recreating the fits based on how my ships are currently fit. Two of the ship fittings I hadn't reviewed in years. The other ship I found shuffled to the back of a hangar and may wind up using it for a project I'm working on.

The first ship is one I fly all the time: the Prowler. When something works, even if sub-optimal, people tend to leave things alone. But as I put the fit into pyfa, the mids just bugged me. 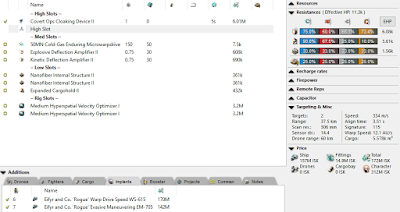 Originally, I had a 10MN Afterburner II and 2 Adaptive Invulnerability Field IIs in the mid slots. One of the weaknesses of my fit was if I landed short of a station, slowboating into docking range was a bit slow and irritating. So I replaced the afterburner with a microwarpdrive. I also replaced the active invulnerability fields with two passive modules, the Explosive Deflection Amplifier II and Kinetic Deflection Amplifier II. If someone attacks, I no longer have to worry about turning on modules, I just have to fly the ship. Besides, blockade runners depend on their speed and cloak for protection. A ship with a 12.1 AU/second warp speed, a regular speed of 2287 m/second with the MWD turned on, and a 3.5 second align time should do well.

The next ship is the Orca. I hadn't touched the ship since CCP added three high slots to the ship awhile back. I realize part of the meta revolves around using the ship to mine with drones while granting yourself boosts. But I decided to go with a more traditional fit that can both grant boosts in a belt or move cargo around New Eden.

For the boosts, I chose the charges that improve mining lasers' and strip miners' range and rate of operation in order to end the pain of mining as quickly as possible. The Shield Command Burst II is present in order to improve the resists of all the ships in the fleet, just in case something happens.

The remainder of the high slots include a Small Tractor Beam II and Salvager II to gather up loot from NPC wrecks. In high sec, the drones from an Orca can pretty much take care of any belt rats, leaving the mining ships in the fleet free to deploy mining drones. The Improved Cloaking Device II is fit to use the MWD/Cloak trick in case travel through low or null is required.

The mid slots are fit with what I hope is an adequate tank, 2 Adaptive Invulnerability Field IIs and 2
Large Shield Extender IIs. When combined with the Shield Harmonizing Charge, the fit has over 300 thousand effective hit points. The last slot in the mids holds a 500MN Y-T8 Compact Microwarpdrive. The calculation in pyfa is incorrect, as the Orca can reach a speed of 436 m/second when using the MWD. Also, the judicious use of the MWD can reduce the align time of the ship in some situations from 30.6 seconds down to 10.

The part of the fit I am still unsure of is the rigs. The Large Anti-EM Screen Reinforcer I is required to plug the EM hold in the shield tank. What I don't know about is whether I should use one hyperspatial rig or two. When combined with the WS-615 implant, the fit currently has a warp speed of 2.76 AU/second. With two hyperspatial rigs, the speed increases to 3.24 AU/second. I think the rig selection is just a matter of taste, and I may wind up replacing the agility rig with the warp speed rig. 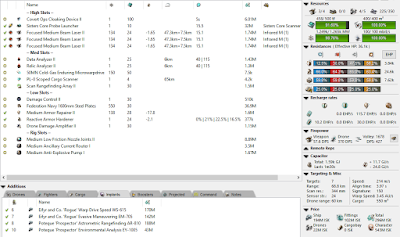 The ship I found in my hangar was a Stratios. I remember an old Johnny Pew video that stated the secret to surviving the explosion of a Ghost Site was to fit a buffer tank, so I decided to go with an armor tank. I also wanted to switch from running data and relic sites to combat sites with a minimum of fuss, which definitely left out trying to develop a shield fit.

The high slots contain what I hope is a fairly standard fit for an exploration Stratios. The Covert Ops Cloaking Device II and Sisters Core Probe Launcher are standard on any of my cloaky exploration ships. The Focused Medium Beam Laser IIs with tech 1 crystals are present to hopefully draw fire away from drones when I deploy them. I'm using tech 1 crystals because they never wear out.

The mid slots once again are fairly standard, I think. The Data Analyzer II and Relic Analyzer II are present because I run both types of sites. Also, in a Ghost Site, I hear that either module works. I use the PL-0 Scoped Cargo Scanner due to the modules increased range which could come in handy when deciding which cans to hack when running a Ghost Site. The Ghost Sites are timed and will blow up in your face, so picking out which cans have the best stuff is important. The microwarpdrive is necessary to travel between the cans as fast as possible. And the Scan Rangefinding Array II, when combined with the AR-810 implant, gives the probes a strength of 124, which should prove sufficient to probe down any site.

The low slots contain a slight twist. The Damage Control II, Medium Armor Repairer II and Reactive Armor Hardener are pretty standard for an armor tank. But for the buffer, I chose to use Federation Navy 1600mm Steel Plates. I normally don't use faction gear, but not only do the armor plates offer more protection against a Ghost Site explosion, but I was able to get the align time under 4 seconds, which is pretty good. I finished up by fitting a Drone Damage Amplifier II. When using Curator IIs, the ship puts out a theoretical maximum 427 damage per second.

The fitting is completed with three rigs, with another choice that once again is unusual for one of my fits. For the first time I'm using a tech 2 rig, a Medium Low Friction Nozzle Joints II. The agility rig also helps the ship get the ship under a 4 second align time. After experimentation, the Medium Anti-Explosive I offered the best choice to improve the armor tank. Finally, a Medium Ancillary Current Router I was required to increase the power grid.

When running combat sites, I plan to replace the analyzers and the cargo scanner with 2 Omnidirectional Tracking Link IIs to improve the performance of the sentry drones I plan to use as well as a Cap Recharger II to increase the capacitor recharge rate for a few seconds longer.

I realize I'm not a great theory crafter, but putting down the rationale for my fits seems to help. I'm pretty sure I made a mistake somewhere. I just hope I don't find out what in a fiery ball of flame.
Posted by NoizyGamer at 6:00 AM