The Latest On EVE Online RMT And Bots - January 2018

The last two years in EVE Online have seen an increase in the challenges faced by CCP's security and customer service teams in combatting real money trading (RMT) and associated ills such as botting. From the introduction of skill point trading (February 2016) to the introduction of Alpha clones (November 2016) to the expansion of the Alpha clone skill set (October 2017), EVE's black/grey markets experienced growth due to either new products to sell or the acquisition of ISK becoming easier. Throw in the development of bots from new developers using modern operating systems and CCP has its hands full.

I don't want to diminish the problem in any way. To give some sort of scale to the problem, I'll bring up some numbers I collected in 2017 from a popular site that sells virtual currencies in online games, Player Auctions. While the final numbers are not in yet, and I know I missed some transactions, the site will have done between 48-50 trillion ISK in sales and sold 22-23 billion skill points last year. Add in things too difficult to reliably track, such as PLEX, characters, and supercapital-class (titans and supercarriers) ships, and the figure might reach $500,000 USD in sales for the year. More significantly, while Player Auction is a large site, players can find many more places to buy ISK, skill points, etc, on EVE's secondary markets.


CCP appeared to want to begin 2018 with a bang on the RMT front. The security team has a history of performing crackdowns against RMT operations right before an update. Looking at the price history I compiled for Player Auctions indicates some sort of mass interruption in the supply of ISK occurred at the beginning of the month. On 5 January, the price of ISK sold exceeded $5 and has continued through yesterday. On 6 January, only 5 sellers advertised ISK for sale, another indicator of a restricted supply. Cynics may point out that 6 January was Orthodox Christmas, but the presence of the holiday has never mattered before. By 13 January, the 7-day average for the price ISK sold on PA rose to $5.94/billion ISK, a rise of 29.1% over the price at the start of the year.

The hallmark of a classic CCP anti-RMT push is to follow-up the initial crackdown before a release with new detection methods introduced during the release. According to information gathered from botting forums, such a crackdown occurred.

The following comes from the forums of a series of bots called Eve Pilot, Eve Miner, Eve Hunter, and Eve Trader. These bots once were very popular with western players but now the forums mostly see posts in Russian. I tried translating the posts as best I could. I think I came close. I will list the posts with both the original Russian and my translation.

Yesterday, a wave of bans went for macro-trading couriers tradesmen, who else was caught?

yes, 3 bans flew too for macros 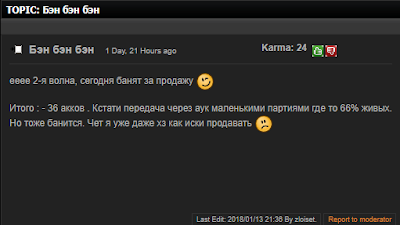 Eeee 2nd wave, today banned for selling
Total:-36 accounts. By the way, I was banned even though I transfer through the auction in small batches that were 66% of the living. I now even sell claims.
Update: Here's a better translation from Sarmatiko via Twitter:

Admittedly, my translation of the last entry isn't the greatest (see the above update with a better one). But I think I made my point. The bot bans began on 9 January, patch day. According to CCP Falcon, the number of banned accounts had reached just under 1000 by the time the CSM Summit began yesterday.

CCP also added some code to make the lives of botters a bit more, shall we say, interesting? Most people assume the change that affected bots involved adding the chat bubbles to the portraits in local. If I read the botting forums correctly, however, the following UI changes are associated with a problem:


NPC Bracket Colors have been reworked.

I'm loss two ships in two days...How to avoid this NPC? NPC Macharial and NPC Cynabal..... why they attack me...they even are not in my overview..I also didn't attack the mining fleet..they also not are in my overview

what is going on?

Edit: Now the problem is bigger because this NPC will attack you anyway no matter what standing you have.

Also they can come on belt when you still shooting some normal NPC. H-BOT is not making another keyword check to avoid them so basically this will be a big problem - no more belt bot :(

Normally I would try to come up with a fitting conclusion, ending with a warning not to bot or purchase dirty ISK. Instead, I'll let a botter who has made botting guides make the argument for me. From the Eve Pilot forums:

So, 8 botting Nyx... Bravo to that developer for making a carrier bot, but I hope he fixes the fact that it can't deal with bubbles. I suspect that bubbles will be used a lot more often to catch bots and as proof that they are in fact bots... (Will EP ever be able to detect bubbles?)

Everyone be more careful now. The witch hunt has already started.

Obligatory, "Don't RMT people..." Sooner or later all of your accounts will get banned, along with your computer hardware identifiers.

I wonder why those accounts haven't been banned yet... To me, the only reason that makes sense is that CCP hasn't yet figured out how that much isk is getting to the buyers without CCPs detection code flagging the event. I'll bet CCP hopes that the botter is stupid enough to sell his isk to someone like a wholesaler so that CCPs detection software can be updated to see what the blindspots are. The botter should trash his bots and start over with another group instead of giving up his methods and burning their RMT wholesaler... I hope that the wholesaler knows not to buy from this guy... This incident has put every past and future RMTer at severe risk of discovery. (Not to mention the botting witch hunt that's about to happen.)