Today the second iteration of the Guardian's Gala event hits EVE Online's live servers. As per my usual practice, I logged onto the Singularity test server to make sure my Arbitrator could successfully run the event sites. I was unsuccessful after several attempts. I like using tech 1 cruisers to run the seasonal events, but for the Guardian's Gala I plan to upship to battlecruisers or even command ships. Below is a scouting report from Singularity which might shed some light on the situation.


"The Serpentis Corporation has enjoyed celebrating its links with underworld business partners and New Eden's most fearsome criminal gangs for many years. The Guardian's Gala is, above all, an exaltation of its deep relationship with the Angel Cartel, particularly the Guardian Angels division that act as protectors and enforcers for the Serpentis and their illegal drugs industry.

"These gala events celebrating the longstanding and close relationship between the Serpentis and the Guardian Angels make a tempting target for law enforcement. Crashing this party is sure to stir up a reaction from Serpentis and Angels alike! Freelancers working for The Agency are certain to profit from successful raids against the Guardian's Gala!"

The event drops the usual mix of a new line of SKINs, cerebral accelerators, and combat boosters. One important point. The NPCs give no bounties. Also, I salvaged the wrecks from two sites, and aside from the event loot drops, the salvage was worth about 1 million ISK per site. But, as the CSM minutes revealed, while the event site itself is reused from last year, the NPC ships are new. Given that the Guardian Angels are the division of the Angel Cartel that developed the Dramiel, Cynabal, and Machariel, that means an event with a little higher level of difficulty.

WARNING: The below description is for the regular event sites. If you enter the VIP sites, the Guardian Angels will call in a carrier for support. Avoid these sites if flying dolo.

Not only are the Guardian Angels flying new ships, but they are also using new tactics. The NPC fleet composition consists of frigates who orbit within 5 km and apply webs. I found that the NPC fleet commander kept a swarm of frigates around my ship at all times, and I rarely had as few as two webs applied to my ship at any time. The cruisers are artillery fit, taking advantage of the frigate tackle to say out of close range weapons. I found that they attempted to remain approximately 24 km away. To complete the site in high sec required destroying either a battlecruiser or battleship. The battlecruiser would stay at 18 km while the battleship would stay at 40 km. Did I mention the battleship was labeled as a Bachariel? That's right, we get to face an NPC Machariel, except with fleet support.

The event NPCs also have another tactic that may disconcert some players. They will fleet warp to a ping and then land on top of your ship. Kiting is not going to happen. At one point I attempted to use a micro jump drive to gain some space and the NPCs just warped to a ping and back down on top of my ship. No picking off frigates as they race in to apply tackle in the Guardian's Gala event sites. The tactic is how the NPCs can keep tackle applied continuously.

How did I complete the sites? Since I don't have a Gila on Tranquility, I chose battlecruiser hulls firing heavy missiles. Drone use is problematic, as the NPCs do like to fire on drones, and they will split their fire. A Gila's 500% damage and hit point bonus applied to Valkyrie medium drones will do well, but for other ships, drone management is key. As for projectile weapons, autocannon on a battlecruiser don't have the range to effectively deal with cruisers or hit the battleship. Artillery, on the other hand, won't hit the frigates. The only weapon system that can reliably hit all the targets is heavy missiles.

For the initial warp-in to the site, I chose to land 70 km from the beacon. The distance forces the NPC fleet to warp to a ping, giving me time to align to a celestial and make sure all hardeners are active and the afterburner is lit. The tactic not only allows for a warp-off if the damage is too great, but in low sec allows for a fast getaway in case someone else jumps into the site.

Next, I concentrate on removing damage, namely the cruisers. Yes, the webs increase the incoming damage. The heavy missiles always target the cruisers unless frigates are the only remaining target. Any drones I deploy always attack frigates. Finally, once the boss NPC (either battlecruiser or battleship in high sec) lands in range, direct the heavy missiles onto the battlecruiser/battleship. Once the boss ship is destroyed, the site is complete. However, the NPCs do not despawn immediately, even if you warp out of the site after killing the boss. Since the boss NPC has the good loot (i.e. SKINs, cerebral accelerators, etc), I fight my way to the wreck. At this point, the site is complete, so no more reinforcements arrive.

A warning about warping out of the site. When running a site solo, and if a player warps off while the boss ship is on grid, upon returning, the boss ship will no longer appear on grid. The boss ship will appear again after fighting through more ships. Also, warping out of a completed site could result in the wreck with all of the event loot despawning. As an experiment, I warped out of a site after killing the battlecruiser boss ship and then warped back. The wreck was still present, but I landed 190 km from the wreck. Warping within the site is not possible, so I attempted to warp out of the site and then back in at a closer distance. All the NPC ships and wrecks were still present except one, the wreck with the good loot. However, killing all the NPCs makes the station despawn and you can safely warp out and collect the loot.

As usual, I will share a couple of the fits I tested over the weekend. The first is a permatank Drake. 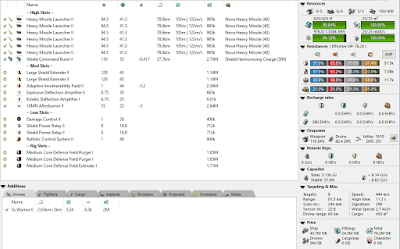 The Drake is probably the battlecruiser with the strongest tank. Having experienced the DPS output by the event NPCs, I wanted a strong tank. With my skills almost all at level 5, I developed a shield tank with 87.4% resist against explosive damage and 83% resists against kinetic damage while maintaining a passive shield recharge rate of 380 effective hit points per second.

The tank begins in the mid slots, with 2 Large Shield Extender IIs providing a large shield buffer with an Adaptive Invulnerability Field II, Explosive Deflection Amplifier II, and Kinetic Deflection Amplifier I providing resist bonuses. A large buffer helps provide more passive shield regeneration, as modules like shield power relays work on a percentage basis when adding hit points to the tank. The mid slots are completed with a 10MN Afterburner II for the necessary propulsion required to complete the site.

The low slots are also mainly dedicated to the tank. The Shield Power Relay IIs help power the passive shield regeneration while the Damage Control II adds both resists to the shields along with a boost to hull hit points in case things go south. The final low slot is filled with a Ballistic Control System II to add a little boost to the ship's missile DPS.

Of the 7 high slots, 6 are filled with Heavy Missile Launcher IIs. During my testing, I used explosive missiles instead of kinetic, with which the Drake receives a 10% damage bonus per level. The seventh is fit with a Shield Command Burst II firing Shield Harmonizing charges for an extra 11% boost to all shield resists.

Finally, the drone bay is filled with 5 Warrior IIs. When running the sites, I never used them. The heavy missiles did fine by themselves, even firing non-bonused missiles. 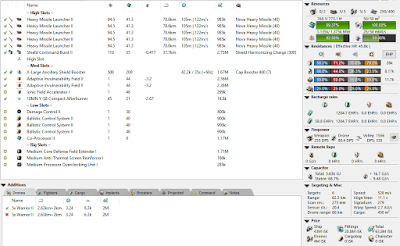 The second battlecruiser was an XLSB Cyclone. The fit takes advantage of the Cyclone's active shield boosting bonus (37.5% at Minmatar Battlecruiser 5) to run a smaller buffer with a much smaller signature than the Drake. The resists are not as good as the Drake's (79.2% explosive/75% kinetic) but the ship runs the sites well, with the extra 82 m/s speed useful when cleaning up the field after the boss ship is destroyed.

Like the Drake, the tank begins in the mid slots with an X-Large Ancillary Shield Booster. The module gives the ship its name. When combined with the Ionic Field Accelerator I as well as the Cyclone's native bonuses, the XLSB can repair 1205 effective hit points per second. When running the module, I can usually get two repair bursts off before the 60-second reload cycle kicks in. During testing, though, I never hit armor.

The mid slots are filled out by 2 Adaptive Invulnerability Field IIs for resists and a 10MN Y-S8 Compact Afterburner. Both the Ionic Field Accelerator I and the afterburner were used instead of the tech 2 versions due to fitting restrictions.

The lows are a mixed bag. I use 3 Ballistic Control System IIs in order to get comparable dps with the Drake. A Damage Control II is included because every little bit helps to increase the shield tank's resist profile. Finally, a Co-Processor II is fit to provide needed CPU.

The high slots are reserved for 5 Heavy Missile Launcher IIs for damage and a Shield Command Burst II loaded with Shield Harmonizing charges to increase the resists in the tank. I left one slot empty not only due to fitting issues but because I really didn't have anything to put in the second utility slot.

The rigs are fit with a Medium Core Defense Field Extender I to provide a little bit of a shield buffer and a Medium Anti-Thermal Screen Reinforcer I for additional thermal protection. I normally fly with an omni-tank, but I replaced the usual EM Ward II I fit in the mids with a second Adaptive Invulnerability Field II because I found I needed to get my explosive resists up to 75%. A Medium Processor Overclocking Unit I to provide more CPU rounds out the rigs.

Finally, the drone bay is filled out with 10 Warrior IIs. I do use the drones to quickly attack a frigate and then quickly retreat back to the ship when an opportunity to remove a web presents itself.

That concludes my look at the Guardians Gala event for 2018. Of course, CCP may have made last minute changes. What I do predict is a lot of tears flowing from players who find a much harder event than they are used to. I suspect the event was designed for old players flying solo and newer players flying with friends. Whatever you do, fly carefully.
Posted by NoizyGamer at 6:00 AM