The Benefit Of Advertising On R/EVE

Writing about botting and illicit RMT in EVE Online poses a challenge. On the one hand, I don't want to glamorize the practice or advertise for any botmaker or ISK seller. On the other, mentioning a bot or an ISK seller is almost a necessity when covering the subject. A recent example involved my coverage of the recent ban wave in EVE. I used some posts from a botting forum to confirm that CCP had indeed begun a ban wave. I then used sales data from a gaming currency sales site to report the effect on ISK sellers.

I get around the bot naming problem by only naming specific bots in association with bans or a banwave. For some reason, the normal player doesn't want to use a bot if CCP is busy banning its users. As for reporting on black/grey market prices, I settled on Player Auctions. Not only is the site huge and comes up near the top of Google searches, but academics use data from the site when writing about the subject. Combined with the small readership of The Nosy Gamer, my posts don't result in bumps in sales.

However, not everyone is as careful. One of the best places to visit for news on botting, exploits, and RMT is the EVE Online sub-Reddit. Over there, if the posters aren't actually working for an RMT site, then they give out enough information to greatly aid them.

One of the greatest examples occurred in December. A post appeared from a former player who allegedly didn't like RMT because buying ISK off the black/grey market for 18 months ruined the game for him. The opening post was deleted after around 24 hours. The post read pretty much like one of those paid advertisements, including links to RMT sites. 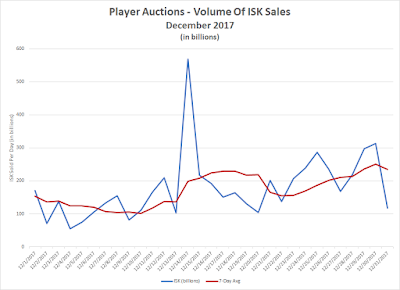 If you guessed 14 December, you are correct. The day the post went live was the highest sales date for ISK I saw in the 2 1/2 years I've tracked sales on Player Auctions. The 569 billion ISK sold (and I know I probably missed a transaction or three) beat the previous daily high by over 35%. Advertising ISK selling on r/eve seems to really pay off.

Like I stated before, r/eve is one of the best places to keep tabs on botting and the black/grey RMT markets. I just hope the mods will take a little greater care in not letting people advertise on the sub-Reddit.
Posted by NoizyGamer at 8:05 AM