On Saturday morning, I opened up Dotlan expecting to see that the Illinfrik botter had finished running level 1 distribution missions and had moved the bot farm to Agha to finish grinding Trust Partner standings with the level 2 distribution agent there. Instead, I saw northern Derelik with slightly higher traffic but not the big increases in specific systems that indicated the bot farm had moved and was active. I figured maybe the botter had either not had a chance to restart the farm or had gotten sneaky and was running the bots distributed amongst the various level 2 agents in Derelik.

The Dotlan jump map for Derelik looked pretty much the same when I returned from doing my weekend chores six hours later. Since I have access to plenty of locator agents and a list of characters, I flew to the nearest one and conducted a search. 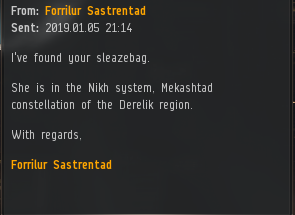 Nikh is exactly where I expected to see the bot farm flying. Logging into a second account, I flew the character I have monitoring bots in Derelik to Agha, home to a level 2 agent. Agha is a dead end system whose only exit is Nikh. If the bot farm was active, I should see some of the characters on my list flying by me before I hit the undock of the station in orbit over the sixth moon or Agha IX. Didn't run into any of the bots.

I thought the message I received from the locator agent meant that the character was flying in space when found. So I did what any EVE player does when confronted with a question. I opened up Google and searched for the EVE University Wiki entry for locator agents. As usual, I found my answer.


"Once done the locator agent will send you a Notification with the location of the target when you started the search which will include the system, constellation and region as well as the station the player might be docked at. If the target is in space, no station will be listed. E.g. "The sleazebag is currently in the Bukah system, Nohshayess constellation of the Khanid region."

So the message from the locator agent indicates either that the character was flying in space and active or logged off in space. But why would a bot log off in space? Did downtime come and the botter just not start the bots back up, which is what I was investigating? Or did CCP ban the character, and the rest of the bot farm? Really, only time would tell.

So far, though downtime today, I haven't seen the typical bump in activity indicating a bot farm operating from an agent near Nikh. I also haven't seen any indications that the botter is operating in Illinfrik. I'm crossing my fingers, but I think the botter has had his fifth farm banned in the last 5 weeks. And this time, before the farm started running level 4 missions.

While the banning of another bot farm is good news, I want to include a warning to all the would be bot hunters out there. I've seen posts on the EVE Online sub-Reddit stating that CCP has not banned reported bots because they've tracked the bots with locator agents and the agents always report the bots are flying around in space. Take such reports with a grain of salt. Locator agents are just a tool to help confirm whether a bot is active or not, not an all-knowing oracle. Confirmation still requires eyes on the target.
Posted by NoizyGamer at 8:24 AM