Another Look At Blackout Maps - 3 Weeks In

I have to admit, the Talking in Stations interview with CCP's CEO Hilmar Veigar Petursson, CCP's Senior Community Manager CCP Falcon, and CCP Goodfella, Senior Brand Manager of EVE Online, left me scratching my head almost immediately. According to Hilmar, EVE Online had experienced it's best daily active user (DAU) and monthly active user (MAU) in five years. But when I looked at Eve-Offline.net, I saw that the average number of users had declined from 22,000 during June down to 20,000 over the last two weeks. Something isn't quite right.

Everyone seems to jump on the PvP activity bandwagon with the communications blackout. The impression I get is, if you like to PvE, "Suck it up, buttercup. Harden the fuck up, or go back to high sec." And that impression isn't just from players. I was left with the impression that PvE players don't really count.

I shouldn't really take too much offense. I don't live in null sec, after all. But I was interested in how blackout affected PvE, since Hilmar ducked the question when asked about the subject near the beginning of the interview. What follows is a look at five regions owned by major coalitions: Dead Coalition, Legacy, Winter, PanFam, and the Imperium. On 7 July, the final Sunday before the blackout began, players killed over 2 million NPCs in these five regions. What I found might surprise some people.


In June, the region claimed by Dead Coalition led the entire game with the number of NPCs killed with an average of 597,860 per day. Compared to the Sunday before the blackout began, players killed 91% fewer NPCs yesterday. 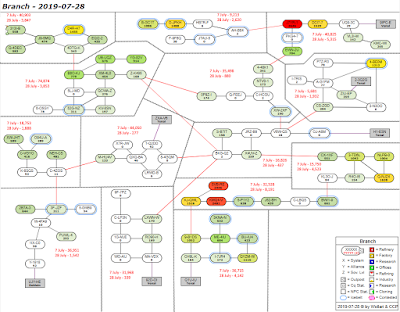 
The region mostly owned by Test Alliance Please Ignore had trailed only Branch in the number of NPCs killed in June with 438,105 per day. The ratting activity in Esoteria did not fall as dramatically as that in Branch, and the region will still probably maintain its ranking as the number 2 top ratting region in null sec. However, Esoteria will fall behind several high sec regions once the final stats for July are published. 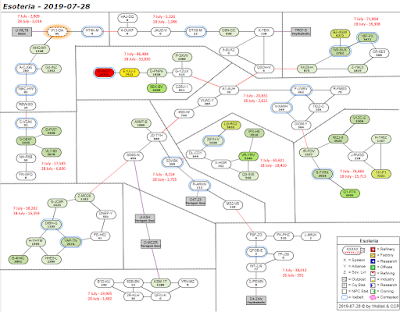 
After a very good June which saw Detorid rank 3rd in null sec and 5th overall in New Eden with an average of 308,096 NPC kills per day, Winter Coalition has faced some hard times in July. On top of the blackout, Detorid will probably rank as the null sec region with the most players killed in July. If battling Legacy Coalition was not a tough enough challenge, Sansha's Nation decided to launch an incursion into the GJH-1C constellation Sunday as well. Frankly, I'm a bit surprised Fraternity. and friends were able to spend as much time killing NPCs as they did. 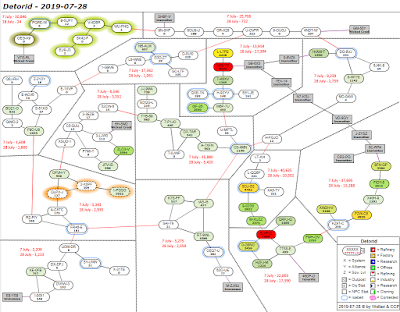 
Malpais is not an economic powerhouse like the other regions reviewed in this post. However, the powerful PanFam coalition decided to make the region its home and dropped keepstars during the initial blackout period. Looking at the PvE activity, one can see how the PanFam leadership moved players to the northwestern portion of Malpais in order to set up activity under a supercap umbrella. 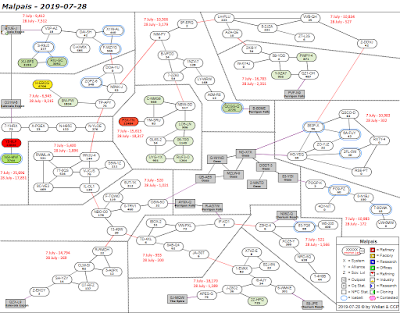 
I am sure people are tired of listening to The Mittani state that any change that adversely affects The Imperium will affect smaller groups even worse. Expect to hear more of this message on the next Meta Show, especially if Aryth appears as a guest. Not only was Delve the only region among the five reviewed that did not see a decrease of over 50% of NPCs killed, but Imperium pilots managed to kill more NPCs than in the other four regions combined. In absolute terms, the Imperium lost revenue. But in relative terms, the Imperium became stronger compared to its adversaries. 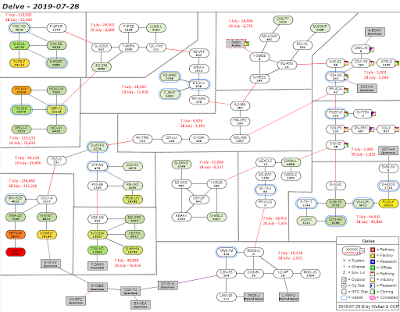 Overall, ratting activity in the five regions above dropped 63.7% yesterday compared to the last Sunday before the implementation of delayed local in null sec. I'm not quite sure how that correlates with the 5 year highs in DAU and MAU reported during the Talking in Stations interview. Perhaps the reduced activity were bots and AFK ratting ships staying docked up and we finally saw the true, player numbers for active ratting. Maybe everyone decided to pull out their Rorquals and go mining instead. Or maybe everyone decided to go to high sec.

Perhaps the simplest explanation is best. People can't play the game the way they want, so they aren't logging into the game. The question then becomes, will players not playing the right way affect the bottom line enough that CCP changes course?
Posted by NoizyGamer at 3:34 PM