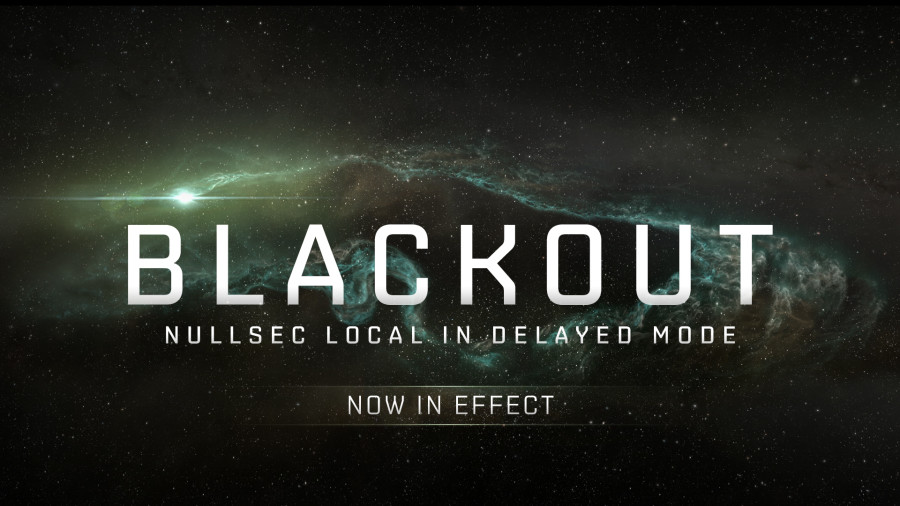 CCP began the implementation of delayed local in EVE Online's null security space on Friday. Unfortunately for those who write about EVE, third party sites such as zKillboard and Dotlan joined into the spirit of the event and blacked out the information they normally provide on null sec activity as well. Looking at the maps on Dotlan today, what was bad for writers, talking heads, and hunters was probably a good thing for residents of null sec interested in partaking in PvE activities.

Since the information blackout wasn't lifted until 1100 UTC on Monday, I didn't have the weekend to analyze the data. But that is why we have maps. Dotlan does a great job of visualizing data, so what I'll do is post before and after maps of the top ratting regions in null sec in June. Since Sunday is the busiest day of the week in EVE, the maps will show the number of NPCs killed on 7 July, followed by the number of NPCs killed on the 14th.

First, a list of the top regions for killing NPCs in June, according to Dotlan. 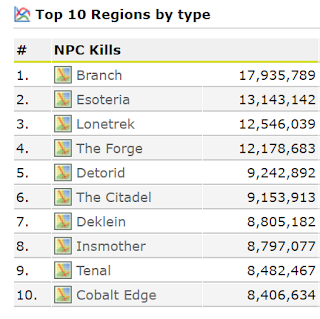 Seven of the top 10 regions for NPC kills in June were located in null sec. That's a lot of maps, but here goes.

2. Esoteria. The region owned by Test Alliance Please Ignore experienced a massive drop in PvE activity. But as we will see, they did very well compared to a lot of groups.


5. Detorid. Outside of Fraternity.-held space, the region turned into a ghost town.

7. Deklein. The home of Darkness. and Dead Coalition saw a dramatic decline in ratting the first Sunday of Blackout. I think the system MXX5-9 is an indication of the effects of the switch to delayed local. On 7 July, players killed 11,393 NPCs in the system. The first Sunday after the change: 0.


8. Insmother. In another Winter Coalition held region, the news isn't as bad as it looks when just looking at the map for 14 July. Large parts of Insmother were also inactive on 7 July. Still, the decline in activity was very noticeable.


9. Tenal. Another region in the galactic north, this one dominated by Ranger Regiment, saw a huge decrease in activity. One might have thought a dead-end system like 30-D5G would have seen a significant amount of ratting on Sunday. But the number of NPCs killed on Sunday was 564, a huge drop from the 32,287 killed on 7 July.

10. Cobalt Edge. The region in the north-east corner of New Eden is owned and operated by Hard Knock Associates.


Honorable Mention: Malpais. When looking at regions that may emerge as economic powerhouses, all eyes have to turn to Malpais. The new home of PanFam (Pandemic Legion, Pandemic Horde, Northern Coalition.), the coalition spent the weekend moving their renters around and dropping keepstars. Yes, like all regions, ratting was down. But how much was an emphasis on PvP activity getting in the way? Given the renters of Brothers of Tangra were moved out of 5 constellations during the week, ratting revenue was expected to be down.

Honorable mention: Delve. The home of The Imperium, Delve consistently tops the charts in NPC kills when the coalition is not off on campaign. Yes, ratting in Delve dropped significantly on Sunday. But the level of PvE activity in Delve under delayed local is still impressive. Out of all the major null sec coaltions, The Imperium is handling the change to local the best.


I wish I had some sort of witty or thought-provoking conclusion I could give. But we are just at the beginning of the experiment CCP has dubbed Blackout. About the only thing I know for sure is that 13 August, the expected date for the next release, is a decision point. Continue using delayed local, or restore communications the way everyone outside of w-space is used to? The first weekend can give a hint about the future, but in EVE, everything can change in a very short time if a player comes up with an unexpected answer to a problem. And I have to believe a lot of people see the implementation of delayed local as a problem.
Posted by NoizyGamer at 6:00 AM