On Friday (Thursday night in North America), Pearl Abyss held a conference call to discuss its earnings report for the third quarter. For EVE players, the idea of having a look at the possible financial ramifications of the game decisions made during the summer of 2019 is a novel idea. For myself, I tend to think the success (or failure) of CCP's parent company could also have ramifications on New Eden. Plus, I find some of the things Pearl Abyss is doing very fascinating. 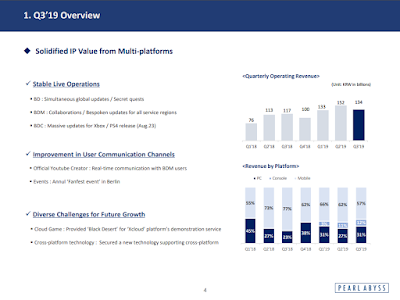 One subject I find myself disagreeing with the talking heads on the talk shows is the degree to which Pearl Abyss has or has not influenced the development of EVE over the last year. While I agree that as long as CCP keeps pulling in steady financial numbers PA will remain fairly hands-off, we have seen some evidence of PA's influence already.

Listening to the call a few times brought home that thought. When addressing investors, Pearl Abyss concentrates on the acquisition and retention of users and technology advancements that help in achieving both goals. For example, in the third quarter, PA worked to make Black Desert available on Steam in Southeast Asia to attract new users. At the same time, PA is working to ensure that the game is updated on the same day across platforms and regions to satisfy their "core user base."

(As a quick aside, listening to this section of the call, I couldn't help but think of the development resource split of 80% towards new players (acquisition) and 20% to the "EVE Core". EVE Core is a term first disclosed in the EVE Vegas keynote.)

Speaking of satisfying the core user base, PA usually includes a few measures it is taking to keep existing users happy. EVE received its first mention on the call for the Invasion Tour. As another example of player outreach, PA is also reached out to Black Desert Mobile players with subsidized clan dinners. 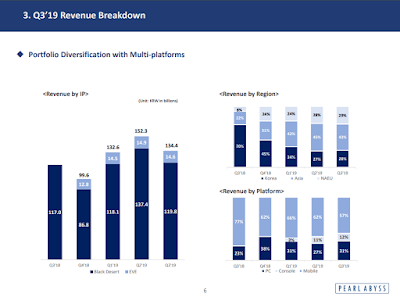 Another theme on these calls is diversification. Basically, PA wants investors to know they are diversifying across platform, as they don't know which market will become the most profitable in the long run. Over the past year, PA's revenues from console sales have jumped from non-existent to making up 12% of operating revenue. PC sales, probably due to the acquisition of CCP, has risen from 23% to 31% year-over-year.

Of interest to EVE players is the performance of the EVE IP during the third quarter. I would say the game performed well, registering only a 2% drop in revenue. The drop down to ₩14.6 billion is still ₩100 million more than the revenue for Q1. The PA leadership on the call spent time defending the 12.8% drop in revenue quarter-over-quarter. The investor analysts seemed happy with the EVE IP's performance. In fairness to Black Desert, PA did state the company had to defer revenue from the third quarter to Q4, which should make the yearly financial numbers look better. 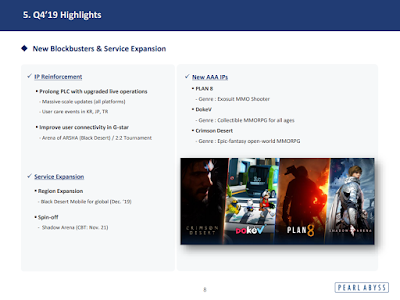 On the Q2 investors call, PA announced mentioned three games in development. On Friday's call, PA revealed more details. The official name of the former Project K is Plan 8. The game developed under the leadership of Counterstrike create Minh Le, is described as a "Exosuit MMO Shooter." DokeV, formerly known as Project V, is a "collectible MMORPG for all ages." Read teen friendly. Crimson Desert, a title the analysts tried unsuccessfully to get details about in August, is described as a "epic-fantasy open-world MMORPG." On the call, Pearl Abyss stated that Crimson Desert would become the new flagship MMORPG for PA.

All of these games will debut at G-STAR, South Korea's biggest annual game trade show, on Thursday, 14 November. In addition, PA will announce Shadow Arena, a stand-alone battle royale game set in the Black Desert universe. A closed beta is planned for 21-24 November.

Pearl Abyss also mentioned existing content the company will expand upon. Black Desert's new expansion, Drieghan, launches on Thursday. In December Black Desert Mobile will expand globally, reportedly on the 12th. The deferred revenue mentioned earlier in the call is probably related to pre-orders for BDM. EVE was not left out of the announcements, with the Korean localized client available on Thursday as well.

In August, the investor analysts focused in on the unnamed game revealed as Crimson Desert. On Friday, the analysts concentrated on information about EVE: Echoes. One of the analysts had a question about the term "open beta testing" and whether that meant the game was commercially available and bringing in revenue. The PA leadership had to confirm that the open beta was a true open beta and not a marketing gimmick.

The second question concerned a sticky subject, licensing of EVE: Echoes within the People's Republic of China. The EVE IP would undoubtedly bring in more revenue if the Serenity cluster could reopen. The same is true for EVE: Echoes. Government approval for the mobile game would bring in increased income, and more investment interest, if Pearl Abysss can garner the appropriate permits to operate the game in China. I'm sure the question will arise on the next call in some form.
Posted by NoizyGamer at 6:00 AM