While reading the Talking in Stations Discord, someone stated that the respawn time for ice anomalies increased from 4 hours to 5 hours. When asked for a source, the person said he read it on r/eve. Sigh.

I know that CCP likes their stealth changes. But what does the change accomplish? With the theme of the first quarter involving PvP, My first assumption was the developers introduced the change to make using jump drives and jump bridge networks more expensive to use. The theory is that lowering the supply should raise the cost of the isotopes needed to power ship jump drives and the liquid ozone needed to operate jump bridge networks. But is my assumption correct? 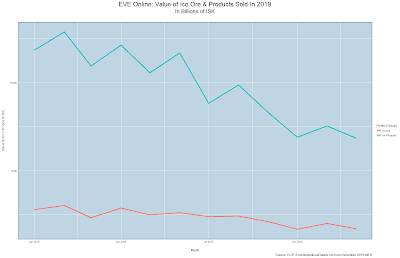 Was the drop in the value of the ice ore and ice product markets due to falling prices? Not entirely. The price of isotopes in The Forge, the home of New Eden's largest market, indicates prices did have a big role. The price of isotopes dropped between 21% to 28%, depending on the type of isotope. But liquid ozone actually rose in price 25%. So at least in The Forge, declining demand for the products is also playing a significant factor in the declining value of the ice markets.

After reviewing the available data, I've come to a different conclusion. Yes, extending the respawn time for ice anomalies from 4 hours to 5 is an effort to prop up the price of ice products and keep the use of jump drives from becoming dirt cheap. But I now expect the stealth nerf is a precursor to a bigger change. Are capitals and supercapitals due for a balance pass?
Posted by NoizyGamer at 12:00 PM