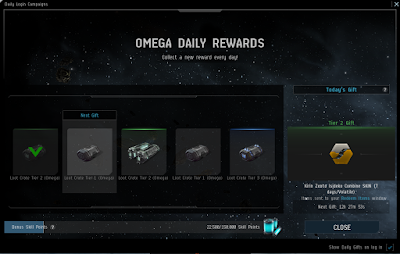 Login campaigns are pretty standardized in EVE Online. Give out some skill points, maybe a cerebral accelerator, a few SKINs, and maybe some boosters. In short, all the things EVE players like.

But this month's campaign is different. The bar along the bottom that slowly fills up with skill points is a nice touch. Innovation is sometimes good. But then, sometimes not.

The crate giving out the blueprint copy is a case in point. Getting a BPC for a tech 1 frigate is not bad. Using the icon for a blueprint original so when the item is redeemed the player is disappointed is not good. 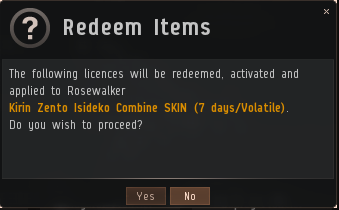 Perhaps the two worst items are the boosters and SKINs. Both apply immediately upon redemption. The ship SKINs are only the 7 day variety. So a player has 14 days to redeem the SKIN and then 7 days to use it before disappearing into the aether. And the boosters? Boosters are commonly consumed once action is about to take place. But that's impossible with the current implementation, as players can only redeem the booster in a station. Oops!

Look, I understand why CCP made the decision. They don't want people making tens or even hundreds of accounts in order profit off a login campaign. I'm not sure how popular skill point farms still are, but the farmers have the perfect setup to greatly profit off these types of promotional efforts. So the valuable items are all bind on acquire instead of tradeable, which is the EVE norm. And except for the skill points, the items are all consumable. Maybe in today's world, promotions can't have much value. But sending me something with little to no value feels like receiving junk mail in the real world. Did I mention I don't like junk mail?
Posted by NoizyGamer at 7:00 AM