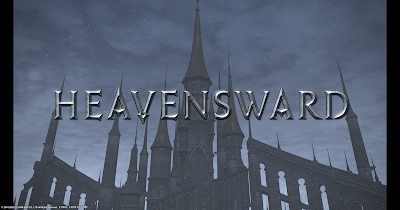 Over the last week I finished the main scenario quest line for Final Fantasy XIV: A Realm Reborn. Once I got to the patch 2.55 content, I decided to update my gear for the end of the patch, mostly because I've never done that in a game before. Normally I just continue playing like the beginning of an expansion was no big deal. But with FFXIV, that didn't seem appropriate. I needed to gear up for the end. I'm glad I did.

I'd done enough dungeons and trials to have enough points to get all the Ironworks healing gear, except for one piece. I decided to not buy the gloves, because I already had a crafted piece from Heavensward. When I completed the upgrade, my gear iLevel was 120.

But before getting the new gear at the beginning of patch 2.55, I had a memorable experience running the last required dungeon of AAR, The Keeper of the Lake. The result of facing down Midgardsormr was the beginning of my character's fall from peak power in the story. Plus, I liked the fight and I received a Midgardsormr minion.

The high point of my character's journey was completing the last trial, The Steps of Faith. Saving Ishgard from the wrath of the great wyrm Vishap made me a legend. But then the bottom dropped out of my life. To explain what happened, the quest "The Parting Glass" explains using about 40 minutes of cut scenes. One source states allow 45 minutes to an hour for viewing. At the end, the only Scions who exit ARR with you is the adorable Tataru and my least favorite good guy, Alphinaud. It was bad enough we lost the rest of the Scions of the Seventh Dawn. But to have to go into exile with Alphinaud? Yoshi-P, what are you doing to me?

Am I finished with the original content? No. I still need to complete a few more dungeons. I need to do at least 1 or 2 in order to get the Ironworks Gloves of Healing. I don't know if I really want to do the Palace of the Dead content. The same goes for PvP. I've played the game for over 600 hours now and still have not done any PvP. I also have to do the beast tribe content. I understand beast tribe farming is a thing. But the most important thing I need to do is acquire all of the advanced crafting recipes from the vendors in Mor Dhona.

Once I get to a point in the story where I can safely go back to the original cities in Eorzea and clear my name, I'll go back to harvesting, crafting, and making gil. I have all my crafting classes at level 53 and my harvesting skills up to 56. That's 11 storylines waiting for me to continue exploring. I have a lot of cut scenes ahead of me.
Posted by NoizyGamer at 4:00 PM