Trying to write about EVE Online's monthly economic report is a bit of a challenge. The posts can read very much alike after a few months. I didn't produce one last month due to that problem. But the end of 2020 has some similarities with the second half of 2019.
In 2019, a massive nerf to null sec PvE preceded the launch of WoW Classic in August 2019. The slowdown in activity as players returned to the classic game not only helped slow revenue growth for the third quarter but led to a 16.4% decline in quarter-over-quarter (QoQ) revenue in the fourth quarter of 2019 as well. In 2020, nerfs to null sec income such as the Dynamic Bounty System, the updated Encounter Surveillance System are too new to show up in the statistics, though the effects of the ore/mineral redistribution are now visible. And delays in software releases meant that the new WoW expansion Shadowlands didn't release until last week. To top off the comparison, one of the most anticipated games of the past two years, Cyberpunk 2077, goes live on 10 December.
First, let's look at the money supply. In the past, I've just looked at the change. October's 1.4% increase doesn't necessarily mean players face inflationary pressure. A more accurate indicator of inflation due to CCP's monetary policy is the amount of ISK per character or ISK per actual player. But what the fluctuations in New Eden's money supply can show is player engagement.
The key statistic determining whether the money supply increases or decreases over the course of a month is the active ISK delta. The formula is:

When a large amount of players leave EVE without a corresponding number of players returning to EVE, the ISK supply decreases. When players are satisfied with the game, less ISK leaves the game and the ISK supply rises. And when a major event like an expansion or some other significant content drop occurs, current players stay, former players return, and the value of the active ISK delta is a positive number, thus expanding the money supply more than just the normal faucet vs sink calculation.
One other fact about the active ISK delta is relevant to the following analysis. An account is considered inactive for purposes of the money supply if the player does not log it in for 30 consecutive days. So, for example, if a player left EVE to play WoW: Shadowlands, the player won't count as leaving the game until December. 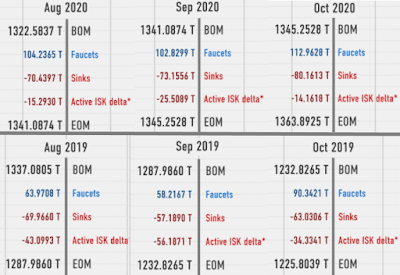 Looking at the active ISK delta really shows the difference between a major null sec war and 2019's Blackout. With both the war and Blackout beginning in July, August was the first month players leaving the game would impact the money supply. In August 2020, the active ISK delta was -15.3 trillion ISK, compared to the -43.1 trillion figure in August 2019. Overall, the average active ISK delta from August - October 2020 was -18.3 trillion ISK. During the same three months in 2019, the average was -44.5 trillion ISK. By itself, this metric would lead me to believe players were more satisfied with EVE in 2020 than with the version on Tranquility in the summer and early autumn of 2019. 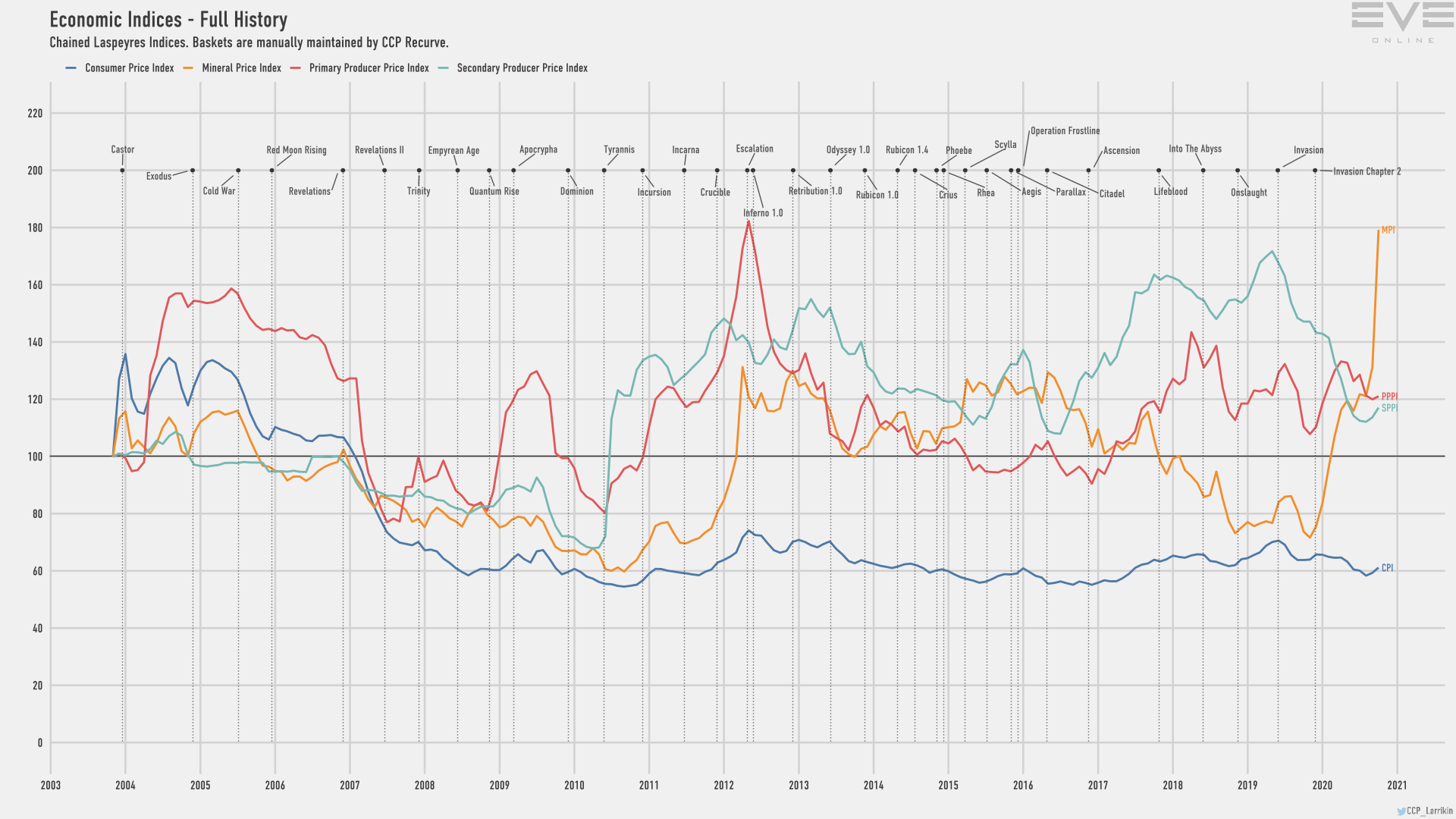 Anyone reading the monthly economic report should take away that something happened to mining in October. The full history economic indicies graph (see above) shows that the mining price index (MPI) hit an all-time high in October. But I find interpreting the indices a little easier when I look at the ISK values inside the indices. 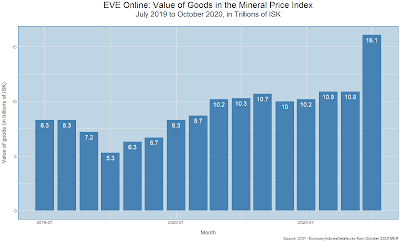 The value of the mineral price index jumped 44.7%, from 10.9 trillion ISK to 16.1 trillion ISK. One should remember that a jump in value does not mean the amount mined increased 44.7% as well. According to another part of the MER, mining increased far less. 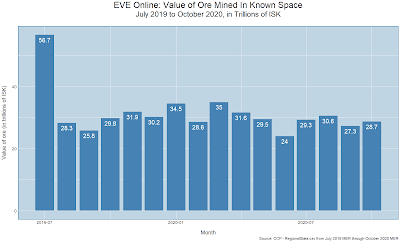 Looking at the regional data (minus Triglavian space), the value of the ore mined in known space rose from 27.3 trillion ISK to 28.7 trillion ISK. The 5.1% increase doesn't quite match up with the increase recorded in the MPI. 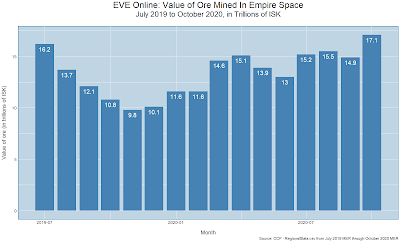 Where the mining is occurring is more intriguing than the amount. The value of null sec mining declined 6.1% (down from 13.2 trillion ISK to 12.4 trillion ISK). That decline, however, was more than offset by an increase of 2.2 trillion ISK in Empire space. I can't help but wonder how much of the increase was a result of null sec empires mining for isogen & nocxium in low sec.
Looking at the mineral and ore data reminded me of a statement from a dev blog in March.

"As announced recently, New Eden is entering a period where resource distribution is being re-balanced. It has been decided, in cooperation with the CSM, to give an update on how and why this decision was made. As detailed above, it was concluded that the economy of EVE is in an unsustainable state. A healthy economic environment where players can find opportunities by making interesting choices is the goal. One of the key pillars of EVE is that loss has meaning and a state is being reached where loss is not meaningful anymore for veteran players." 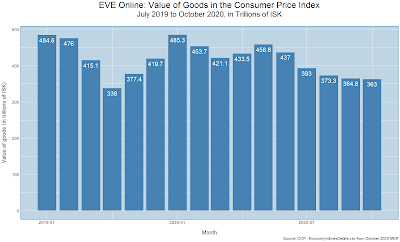 Finally, New Eden is showing the first signs of inflation on the markets. While the value of the goods that make up the Consumer Price Index (CPI) decreased for the fifth consecutive month, the CPI index rose for the second month. Since August, the CPI has risen from approximately 91 to 95 while the value of the goods in the index declined by 2.7% in the same period. 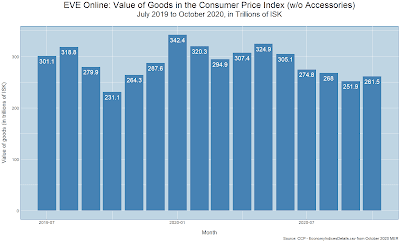 However, that decline includes the real money trading (RMT) tokens such as skill injectors & extractors. For purposes of evaluating the in-game economy, I have argued for years that those items should not count toward the CPI. When those items are removed from the calculations, the value of the goods in the Consumer Price Index actually rose 3.8% compared to September. Or to put the matter another way, the decline in the value of the RMT tokens sold is obscuring the effects of the resource distribution changes.
At the end of the day, I think the data shows that EVE Online is in better shape to handle the launch of a major new game than it was in August 2019. I do reserve the right to change my mind when CCP releases the November MER. At that point, we will have a better idea what the impact of the additional nerfs introduced in November had on players. Because with the November release of WoW: Shadowlands and the 10 December release of Cyberpunk 2077, players will leave the game. The question, though, is how many?
Posted by NoizyGamer at 5:11 PM