Cloud Imperium had a very good year financially in 2020. For the first time since 2014, income outpaced costs.

One figure I found puzzling was the $4.8 million reduction in minority investment. The report stated:

During 2020 the group made a return on capital of ($4.8M) worldwide, ($1.3M) in the Rest of World and ($3.5M) in the US. Much of this was to pay down accelerated taxes and fees arising from the structuring of the group and some was a return on the minority investment made to date, with net inward investment to date at the end of 2020 still equivalent to $58.4M.

We know from the UK financial statement that the $1.3 million in the Rest of the World was paid out as a dividend to shareholders. I'm not sure how much of the $3.5 million in the US went to taxes and how much went to paying shareholders. I got the impression from the earlier financial release that shareholders would also receive a payment from the US part of the business. As it is, the $4.8 million in payments reduces the $7.8 million in profit down to $2.5 million for the year. Although, as the report states, "...the surplus show here will not translate into an accounting profit when applying revenue recognition and other accounting conventions". 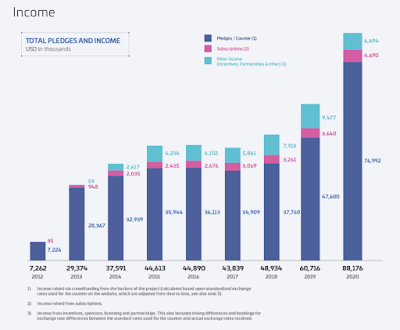 Income generation in 2020 was the best ever for Cloud Imperium. Overall, income increased by $27.4 million, or 45.2%. The report summed up income as follows:

2020 was a record year for income with pledges up 62% to $77M and subscriptions up 29% to $4.7M. Other income was down 31% at $6.5M, owing to the end of the US incentives program that we only qualified for during our initial years of US growth.

A couple of points about Cloud Imperium's income stood out. The first is the cumulative total of the Pledges/Counter category. Adding the yearly total from 2012 to 2020, the amount of ship sales and packages comes out to $337.8 million. But the counter on the website at the beginning of 2021 read approximately $340 million. The report does contain a disclaimer about the amount of the category:

This line is taken directly from our daily published Funding Stats Counter, showing the net receipts from our backers and customers. However due to exchange differences and small items that are not included in the counter, such as collected shipping costs on physical goods, the counter does not completely represent all revenue received.

I do have to point out that the discrepancy between the total in the report and the total on the website, $2.1 million, is almost the total raised during the original fundraising effort on Kickstarter. Which would make sense from an accounting point of view. Cloud Imperium could not count the funds from Kickstarter as sales of digital goods, which is what the category actually measures.

The second point concerns the Other Income category. The report attributes the decline in revenue from the category to Cloud Imperium no longer qualifying for government incentives. The remaining total of $6.5 million lines up with the £4.7 million Cloud Imperium UK Ltd. received in 2020 in the form of the video games tax credit. With that knowledge, we can say that 89% of Cloud Imperium's profits in 2020 came from payments from the UK government.

The total income over the course of Cloud Imperium's existence through the end of 2020 was $405.3 million split into the three categories:

With only a couple of days left in 2021, the Pledges/Counter shows over $85 million in sales in 2021. The odds are that when the financial report for 2021 is released next December, the total amount of income will reach $500 million. And that amount will not include the $58.4 million listed as minority investment. 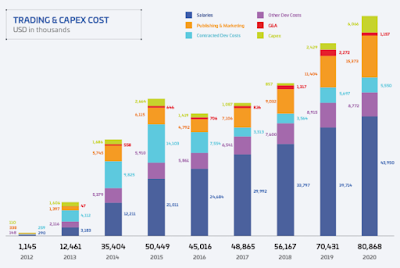 In 2020, Cloud Imperium increased spending by over 10% for the third consecutive year. The report gave a breakdown of last year's 14.8% overall increase:

In 2020, Cloud Imperium continued to grow its expenses and company profile. Costs increased by 10% over 2019 to $74.8M and capital expenditure, at $6.1M, was 150% up on 2019, impacted by the purchase of the perpetual Company CryEngine license for use not just in our current games, but also for potential use in any future projects that CIG might develop. The breakdown of the expenditure is commented upon below. 2020 was an unusual year in which we had to transition to work from home for much of the year and be agile with our development plans. We accelerated much-needed investment into our publishing and security disciplines, in part due to the increased customer engagement but also due to the distributed nature of our operations during the pandemic. While headcount increased 15.1% from the end of 2019 to the end of 2020, the increased payroll costs only accounted for $4.2 million of the $10.4 million overall increase in spending. Of course, increasing headcount doesn't just increase salaries paid. The acquisition of new offices in Frankfurt and Manchester will not show up on the financial reports until the 2021 report comes out next December.

Perhaps the biggest revelation in the report is the news about Cloud Imperium's continued use of CryEngine.

Capex spend in 2020 was significantly up on 2019, which in part was driven by the headcount increase, but in the year we also purchased a perpetual worldwide license for use of the CryEngine, which provides us greater flexibility in how we develop and deploy the engine within our existing and planned future business.

The purchase of the engine license from Crytek seems to resolve the lawsuit filed against Cloud Imperium. Observers may remember that Cloud Imperium claimed to have switched to Lumberyard and no longer used CryEngine. Apparently such reports were incorrect.

The financial future of Cloud Imperium is a lot brighter now than at the time the 2019 report was released. Not only did the company post a profit in 2020, but the amount on the pledges counter for 2021 is actually greater than the 2020 operating costs. The main question now is whether the leadership at Cloud Imperium will manage the resources at its disposal prudently as to remain operating in the black.