I've returned to playing EVE Online in a semi-serious manner. Last year I pretty much only played during events. In 2021 I ranked in the top 5% in the number of events in which I participated and in the top 8% in number of event points earned. This year I am operating PI on four planets with plans to eventually expand.

Another sign I'm taking the game semi-seriously is mining. So far I have mined 166 thousand cubic meters of ore, which is 50% greater than the amount I harvested in all of 2021. I knew intellectually about the residue (or waste) mechanic introduced in December, but I didn't understand why the devs introduced something so complex at a time the skills were simplified. In the patch, the skills to mine and process the 19 regular flavors of ore were reduced down to 6.

For completeness sake, the attributes of the mining crystals are below. 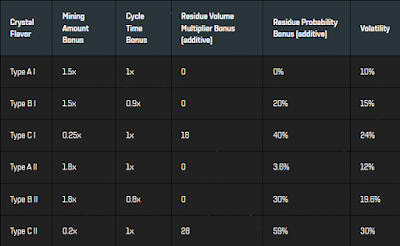 What left me puzzled was what in the crystal and skill changes required the inclusion of a residue or waste mechanic. For the Type A and Type B crystals, the devs could have based making choices on the cost or rate of wear on the crystal. A residue factor wasn't required. For me, the rationale led to the purpose of the Type C crystals. But I couldn't figure out the purpose of a crystal that basically didn't mine ore. Fortunately Urziel, a null sec resident, stepped in.

Choices are t1 strips or faction if you want to bling for no waste. Crystals depend on how bad you want the rock to just be gone. Has more bearing in nullsec when you have to get rid of mountains of Crokite to force a site to respawn.

I don't mine in null sec, so I missed the connection. One of the pain points in null sec is having to mine ore players think is worthless. I remember back in the day ochre was the ore players don't want to waste time on. I guess today the excess ore is crokite. But with the point, the residue system, or at least the design, makes more sense.

I see three benefits from the new feature. The first is wasting less of players' time. Sites in null sec only respawn once the existing site is fully mined out. Mining a lot of unwanted ore in order to mine the good stuff isn't a desirable design. Allowing players to destroy asteroids faster than regular mining is a feature, not a bug. The faster the site is mined out, the faster a respawn occurrs.

Next is preventing, or at least slowing down, the creation of stockpiles. Over the course of the last year, the devs stated numerous times they wanted to draw down all the existing stockpiles. By allowing players to destroy much of the unwanted ore, the developers hopefully don't have to worry about existing stockpiles when they make a change in the future.

Finally, the change hopefully makes pricing on the market more sane by lessening or preventing gluts of ores and minerals. Ore turned into residue cannot appear on the markets, thus allowing miners to charge higher prices. In addition, by making anomalies faster to mine out, the amount of the good ore mined should increase. Not only will that make miners happy, but the increased amounts mined should lower costs on the market. At least, that's my theory.

I'll admit the above is just my personal explanation for the mining changes and introduction of mining residue. The developers may have a completely different rationale for the changes. Also, game system changes often work differently once they come into contact with EVE players. But the important part for me is that the devs had a half-way decent plan. One I think is a bit too complicated, but at least I can wrap my head around the changes.