Yesterday Pearl Abyss held an earnings call covering the third quarter of 2022. The South Korean company was able to report operating revenue of ₩97.3 billion, a 3.5% quarter-over-quarter (QoQ) increase and a year-over-year (YoY) increase compared to Q3 2021 of 0.9%. 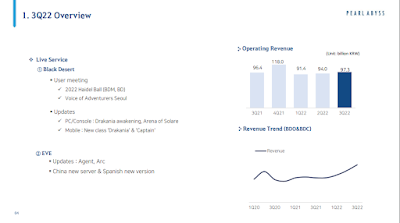 After the payment of employee incentives last quarter, Pearl Abyss' operating profit returned to the black, recording a YoY increase of 17.6% up to ₩12 billion. Net profit declined 33.4% from the second quarter as profits were inflated in the previous quarter due to tax refunds. 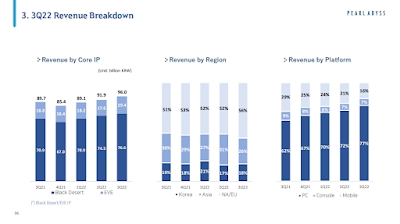 In the third quarter, gaming revenue from Pearl Abyss' main gaming IPs, Black Desert and EVE, increased 4.5%, to ₩96 billion. Black Desert revenue rose for the third quarter in a row, with quarter-over-quarter growth of 3.1% and YoY growth of 8%. EVE IP revenue grew ₩1.8 billion from Q2 to Q3 2022, from ₩17.6 to ₩19.4 billion. The 10.2% increase was even worthy of a call-out by the Pearl Abyss executives on the call. However, when an analyst asked if the increased EVE revenue was what investors should expect going forward or just a one-time event, the executives ducked the question.

The executives had a good reason to avoid answering the question. Q2 2022 was the first full quarter after the big price hike in May. Pearl Abyss Iceland (more commonly known as CCP Games) converts all revenue to US dollars and reports that number to the company headquarters in Anyang, South Korea. From there, the figure is converted from dollars to won. Using the monetary conversion rates from Xe.com on the last day of the quarter, the EVE IP made $13.6 million in the 3rd quarter, a 0.7% increase over the $13.5 million EVE Online and EVE Echoes took in from April to June 2022. 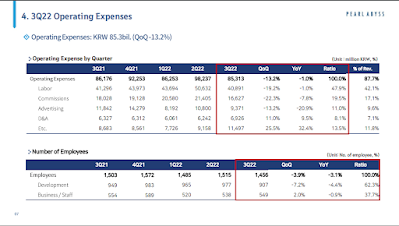 During the question and answer period, one of the analysts asked about commissions. While sales are up, the amount paid in commissions fell 22.3%, down to ₩16.6 billion. Pearl Abyss explained the decline was in large part due to the decline in mobile game sales. In the 3rd quarter, mobile revenue only made up 16% of Pearl Abyss' gaming revenue. In contrast, PC games now make up 77% of Pearl Abyss sales. Looking back to the first quarter of 2020, mobile games have made up a continuously shrinking part of the company's revenue as Black Desert Mobile continued to shrink. In Q1 2020, mobile games made up 54% (₩71.8 billion) of gaming revenue as opposed to 35% (₩46.5 billion) for PC sales. In Q3 2022, the numbers for mobile sales are 16% (₩15.4 billion) of PA's revenue vs PC sales making up 77% (₩73.9 billion).

A big topic of interest was the status of Crimson Desert. Pearl Abyss in the past stated that upcoming games like DokeV will not be published until Crimson Desert launches. The game was originally planned to have a Winter 2021 release date. However, the CEO refused to commit to releasing a gameplay trailer in the remaining weeks of 2022. He did reveal the company expects to release Crimson Desert sometime in the second half of 2023 and has approximately 50% of PA's 900 developers working on the game.

A rumor brought up by an analyst has hit the DokeV sub-Reddit, so I might as well report on it. One analyst brought up the decline of 59 employees from Q2 to Q3 2022. The loss of developers fell from 977 to 907. The executives tried to explain the drop to the end of an internship program that PA had mentioned on a call earlier in the year. Looking back through the records, the current employee totals are the lowest since Q1 2021.

Another analyst stepped up and asked about a rumor that the core development team for DokeV quit. I don't know where the rumor came from, but it did garner some attention. However, Pearl Abyss is aiming for a release of the game sometime in 2024.

A third game under development, Black Clover, also received some attention. First mentioned on the Q4 2021 earnings call, Black Clover is a game designed for the Japanese market based on the Black Clover IP. Originally announced to launch in the second half of 2022, the game release is now expected sometime in the first half of 2023.

Finally, Pearl Abyss told investors that the company continues work on Web3/blockchain technology in video games. CCP is still the studio working on implementing the tech, but will do so in a new game under development. The executives on the call noted the sustained negative feedback from players led to the decision not to try to introduce things like NFTs into CCP's current games.