Early this morning (or yesterday in the U.S.), Pearl Abyss held an earnings call covering the final quarter of 2021. Hang on folks, because everything just got a little more complicated. By complicated, I mean even some, if not all, the analysts from the investment firms were taken by surprise. I'll try to make some sense of what I heard.

At first glance, the numbers for the fourth quarter were great. Pearl Abyss earned ₩118 billion ($98.5 million), or a 22.4% increase in operating revenue compared to Q3 2021. Year over year, revenue increased by 11.7%. The company bounced back strong from the second quarter where PA posted an operating loss. The ₩25.7 billion operation profit was a 28.5% increase compared to the final quarter of 2020. Very good numbers, right? 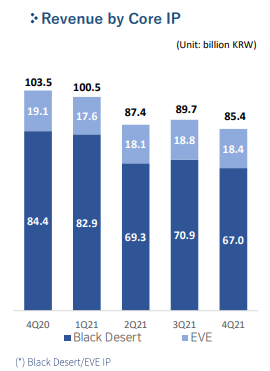 What caused the big bounce back in the 4th quarter? The Black Desert intellectual property declined by 5.5% quarter-over quarter, and 20.6% year-over-year, posting a total of ₩67 billion ($55.9 million). The EVE IP also is not the source of growth. The combined revenue of EVE Online and EVE: Echoes declined by ₩400 million ($330,000) QoQ and ₩700 million ($580,000) YoY.
If Pearl Abyss' two main game franchises didn't account for the increase, where did the extra ₩32.6 billion ($27 million) come from? One of the investment analysts asked the question. The answer is a subsidiary called Pearl Abyss Capital. In the Q3 2021 earnings call,
I reported on how Pearl Abyss invested in a metaverse company known as Hyperreal. The purchase was made by Pearl Abyss Capital, a venture capital firm. I didn't follow all of the details, but the vast bulk of the money was attributed to Pearl Abyss Capital. After the Q3 call, Pearl Abyss Capital led a ₩3 billion round of funding into TUNiB, a "Natural language processing artificial intelligence start-up". Looking at the website, the company's technology seems to have applications for the metaverse.
Pearl Abyss plans on launching Black Desert Mobile in China in the near future. The executives on the call told analysts the company plans on conducting a closed beta test in the first quarter, with a full commercial launch shortly afterwards.
During the call, Pearl Abyss highlighted the development of the Blackspace Engine. While gamers are interested in the graphical and gameplay implications, the analysts on the call were told how PA's new engine can help with development of metaverse technologies. The new engine will run the two new games, the delayed Crimson Desert and DokeV. PA on the call stated it would base new games on "the metaverse and blockchain."
While the executives on the call did not give a launch date for the delayed Crimson Desert, they did provide information about an upcoming mobile game based on the Black Clover IP. Pearl Abyss will conduct a closed beta test sometime in the second quarter, with a full launch in Korea and Japan sometime in the second half of 2022.
The same analyst who asked about the games vs capital subsidiary revenue also asked about Pearl Abyss' strategy concerning blockchain technology and pay2earn mechanics, mentioning DokeV and EVE Online by name. Since the topic is of interest to many people, I transcribed the translator's words below. Hopefully an official transcription will show up in the future.

The game industry is rapidly changing. Within the games, there was consumption, and goods or item accumulation that just happened limited to the virtual world. But now times have changed and now the values that users have created has meaning, even outside of the virtual worlds and are acting as assets.
The need to create value by playing games actually existed even before play2earn -- which is a buzzword nowadays -- has existed. We can see many trends that happened from the past. For example, with the development of video games in the early 2000s there was the wild popularity of eSports. And after the distribution of smartphones we saw more game streaming broadcasts that took place. And we also see people that are actually having a job that are done through playing games and they are making a living and they call this their job. So all of this attests to the need to create value though games.
Likewise, though the development of technology, times are changing from just the passive state of playing simply a game that has been given, but now we have users that actively participate and the structure has changed so they can also create profits through this.
In particular, we believe that blockchain technology will accelerate this trend. To these changes, our company has been researching different technologies during the past years and have reviewed the possibility of introduction.

We will shortly communicate with you in different stages about what we are currently preparing for. Our company and CCP Games both have operated MMOs for a long time and we do have the knowhow to maintain and manage a sustainable economic system. So we are confident we can create a stable blockchain ecosystem.