Is Star Wars: The Old Republic losing subscriptions?  How is Rift doing after one year?  What has been the effect of Star Trek Online going free-to-play?  How badly is World of Warcraft really dropping?  And has Eve Online really recovered from the Summer of Rage?  I can tell you the answer to the last question because CCP makes concurrent user data available to developers through an API so all I have to do is visit Chribba's Eve Offline website and look for myself.  But other game developers and publishers are not as open with sharing information that may place their games in a negative light.  So I have created my own system for ranking the top MMORPGs based on statistics gathered from the Xfire MMORPG games page on 5 February 2012.

I'll give my take on what I found interesting looking at the numbers, but first an explanation of what is in the chart.

How is the score derived?  The score is a percentage calculated by taking the hours played for a game and dividing that by the total hours played for the 12 most played MMORPGs by XFire users.

Is Xfire a reliable source of information?  When I first heard of trying to use Xfire to gauge subscription numbers for a game, I was a little dubious.  I still am.  According to Wikipedia, Xfire is a proprietary freeware instant messaging service for gamers, that also serves as a game server browser and has various other features, including recording how long users play a video game and which video games users play. More importantly, Xfire currently has over 20 million registered users, with frequently over 200,000 users online.  That is a large collection of users that should make the information produced valid for my purposes as long as I am careful in how I use that data.

Why create a score?  Why not just use the total hours played?  While the base of users is quite large, the numbers are not consistent across time.  For instance, on Sunday, 10 April 2011 Xfire recorded that users played Eve Online a total of 2087 hours.  Last Sunday Xfire recorded users played Eve a total of XXXX hours.  Does anyone really believe that Eve has grown in use by 50%?  So instead of measuring hours played, I will compare the top 11 games against each other to look at the share of the market they are capturing against the their closest competitors.  But in this case, time, not money, is the commodity I am tracking, which makes sense since a player can own two or more games.

Your list is wrong. Guild Wars is not an MMORPG! - Since I am not an expert on the MMORPG market, I will use Xfire's definition of what games are MMORPGs and which games are not.

Why 12 games?  Because "Digital Dozen" seemed like a cool name.  I originally intended to track 11 games, but eleven is just too odd to use.  The reason for using eleven is that if I wanted to throw World of Warcraft out of the mix to do some analysis, then that list would have had ten games.  But sometimes marketing wins out over analysis. 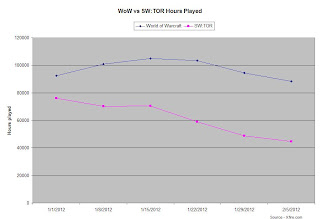 The News:  The biggest question is: how is Star Wars: The Old Republic really doing?  According to the Electronic Arts Q3 FY2012 Conference Call, SW:TOR has an average of 1 million players logging onto their servers every day and still maintain 1.7 million of the 2 million players who purchased the game.  But a controversy is brewing over the date that was really referred to on the call.  The key date is 20 January.  That is the date that those who started playing at launch (or in the early period) would need to subscribe to keep playing.  So how did SW:TOR do with keeping players using Xfire?  Not so good.  From 15 January to 22 January the number of hours played decreased by 14.8%, which closely correlates with the approximately 85% retention rate reported on the call.

Looking at the hours played on every Sunday from the beginning of the year, the number of hours played decreased 41.2%  Was that due to school starting again?  I don't think so.  Looking at World of Warcraft, the number of hours played only decreased by 4.4%.  It is possible that SW:TOR is bringing a lot of people new to the genre so the old bitter gaming vets leaving the game may not represent the player population.  But given the correlation between the Xfire numbers and those reported by EA, I don't believe that is true.  The Xfire numbers decreased 36.6% from 15 January to 5 February, meaning that EA could be facing some problems, although 1.3 million subscribers is still excellent.

Star Trek Online is moving up in popularity following its switch to free-to-play on 17 January.  If the numbers are correct, Eve Online has moved from the biggest science fiction MMORPG at the beginning of December to the third largest today despite seeing the hours played in New Eden increasing by 7.5% since the beginning of the year.  Of course, last weekend marked ST:O's second anniversary and Cryptic/Atari was giving out a lot of goodies.  It will be interesting to see what happens with the game over the next few weeks.
Posted by NoizyGamer at 6:00 AM