The rankings of the top twelve MMORPGs as determined by the players of the Xfire community from play on Sunday, 10 February 2013.  For more details about the methodology, click here.  Historical data can be found here.

Total Digital Dozen Hours: 74,787
The Xfire community's interest in the top MMORPGs increased last week with the time spent playing the twelve most popular games increased by 4.2% last week.  The games seeing the largest increase in time played percentage-wise were Tera (+97.6%) and APB: Reloaded (+11.4%).  The games seeing the largest drops in time played were Metin 2 (-11.1%) and Star Trek Online (-8.0%).

Xfire Updated - Last week Xfire finally stopped supporting their old format and templates and have forced everyone to use the new site layout.  What does that mean for The Digital Dozen.  Besides for making the process of recording the statistics more time consuming the biggest change is that I can no longer calculate the number of total number of hours the Xfire community spends playing MMORPGs.  To give some idea of the trends I will now report on the number of hours spent playing the games on the list.

SWTOR Falls To Fourth - As expected the launch of Tera as a free-to-play game propelled it past Star Wars: The Old Republic into third place on the list.  The question that comes to mind is will Tera fall back to earth quickly or does the game have staying power?  We may get a chance to see as SWTOR's first expansion, Rise of the Hutt Cartel, is not due out until sometime in Spring 2013.  Can the Bioware product keep interest in the game up until then?

WoW Is Dead ... Not! - While the folks at Gamebreaker TV had some fun with the Activision Blizzard Q4 earnings report that showed the World of Warcraft subscriptions had fallen to 9.6 million.  But what does that look like when looking at the Xfire numbers? 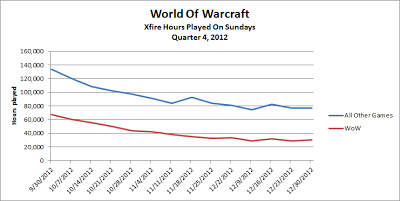 As we can see the number of hours played by the Xfire community for both World of Warcraft and all MMORPGs declined in the fourth quarter last year.  However, WoW's decline of 55.2% was greater than the general overall decline of 42.3%.  Obviously WoW's drop from 10 million down to 9.6 million wasn't that large but Xfire numbers usually only show trends, not actual numbers.