I thought I would just post some of the average concurrent user numbers generated by the Retribution expansion heading into Fanfest next week. 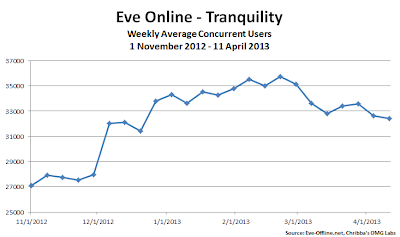 To say that Retribution lured a lot of players to log in is an understatement.  In November of last year the weekly average concurrent user count (average number of players logged on every hour for a week) was only 27,000 - 28,000.  That jumped up to 32,012 the week of the expansion's launch and except during the Christmas holidays hasn't dipped below that mark.

The high water mark for Retribution was 3 March when the peak concurrent user (PCU) hit 60,476, the fourth highest total in Eve Online history.  But the good times ended on 6 March as Team Security began scanning the Eve client's memory space for illicit software, catching Red Guard users flat-footed.  The scans eventually included Questor and bots powered by the Inner Space extension ISXEVE.  From a peak of 35,752 the week of 21 February, the weekly ACU fell 8.2% down to 32,810 the week of 14 March.  Unlike other ban waves, those caught were permanently banned due to the use of code injection that CCP could actually prove.  Because, well, client manipulation is against the Terms of Service.

As of last week the ACU was still 32,400, meaning that Eve players still see the same levels of activity on Tranquility as seen at the launch of Retribution.  So four months into the expansion Retribution has maintained that 14.4% initial increase in activity, despite a major escalation in the War on Bots.  At this rate Retribution will have built a solid increase and become known as one of the most popular expansions.
Posted by NoizyGamer at 7:00 AM