So many new players joining #eveonline that a career agent system is in tidi so we're remapping other systems off its node. #tweetfleet
— CCP Fozzie (@CCP_Fozzie) February 2, 2014

The word is out that a few people decided to try EVE Online after the Battle of B-R5RB took place last week.  Mabrick has already taken a quick look at the number of new characters created since the 21-hour battle and the resulting publicity in the mainstream media.  But HVAC Repairman, currently writing a column for Crossing Zebras, tweeted wondering how the Battle of B-R compared with the number of new players attracted to EVE by the Battle of Asakai.  While only CCP knows the true numbers after a week, we can look at the new characters created graphs on Eve-Offline.net and gather the data from the page source code. 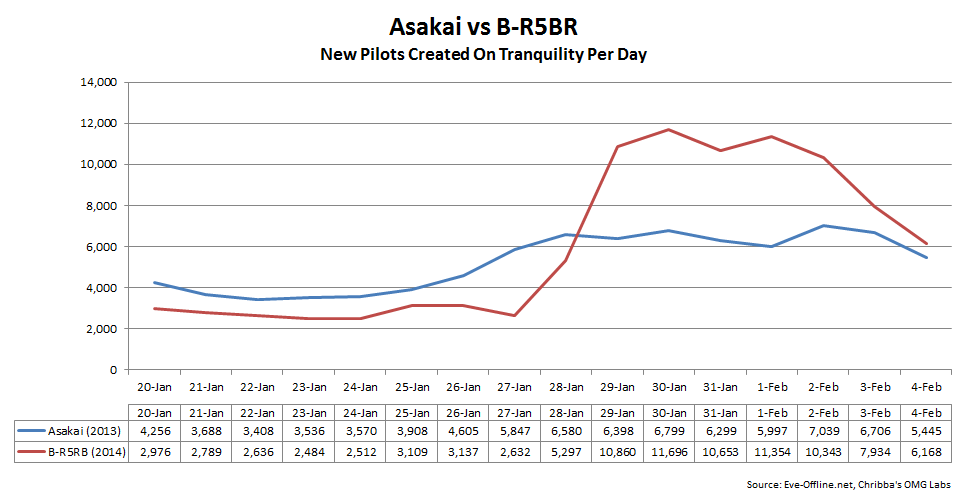 The nice fact about the two battles is that the both took place on 27-28 January, just one year apart.  So in the graph above, I compared the total number of characters created each day, with the data displayed below.  I took the period one week before each battle and one week after.  The results surprised me a little.

With over 69,000 characters created in 7 days, it's no wonder people are noticing the influx of new players.  But while this is a promising development for CCP, most of the new players are still on a 14- or 21-day trial account.  We probably won't know the full effects of the battle for a month or two when we can see the effects on the concurrency numbers.  Unfortunately CCP stopped their frequent release of subscription numbers in 2012 so the activity numbers are all we will have to judge whether the Battle of B-R5RB had a lasting impact not only on null sec politics but on the makeup of the EVE player base as well.
Posted by NoizyGamer at 7:00 AM