CCP's War On Illicit RMT: Race To The Bottom

A funny thing happened to the secondary RMT market1 after Fanfest this year.  The prices crashed.2

I knew after attending both the Economy and Security presentations that something was about to happen to the price of illicit ISK.  I just didn't know what.  So in addition to my normal monitoring activities, I started watching Player Auctions3 again, collecting what daily statistics I could.

What I found was a market in free-fall.  The RMT websites dropped prices to lows I'd never seen before. 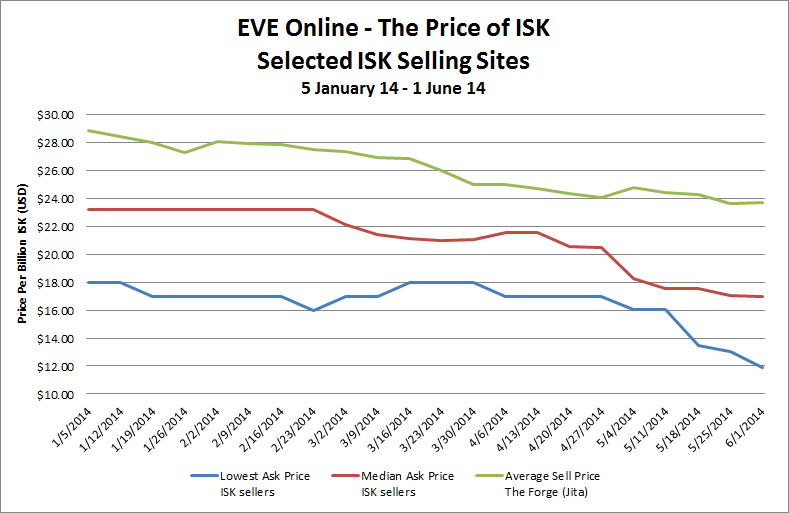 The obvious question is: what caused the glut?  Assuming that the activity on Player Auctions4 in the four weeks leading up to Kronos is representative of activity on the secondary RMT markets as a whole, the answer apparently is decreased demand caused by high prices. 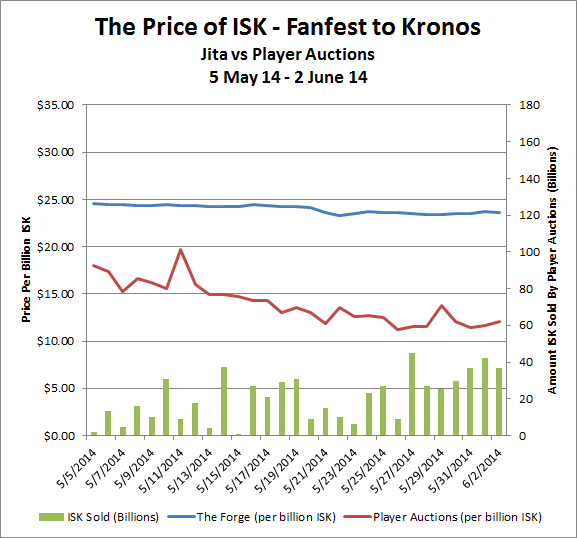 The price for 1 billion ISK if obtained by selling PLEX in Jita dropped 3.7%, from $24.55 per billion ISK to $23.63 per billion ISK.  But the price that ISK buyers actually paid on Player Auctions dropped from $17.99/billion ISK down to $12.02 yesterday, a 33.2% decrease.  More importantly, ISK buyers didn't really begin purchasing in quantity until the price reached $10-$12 per billion ISK under the Jita price.  That held true not only over the past four weeks, but in the first quarter of the year as well. 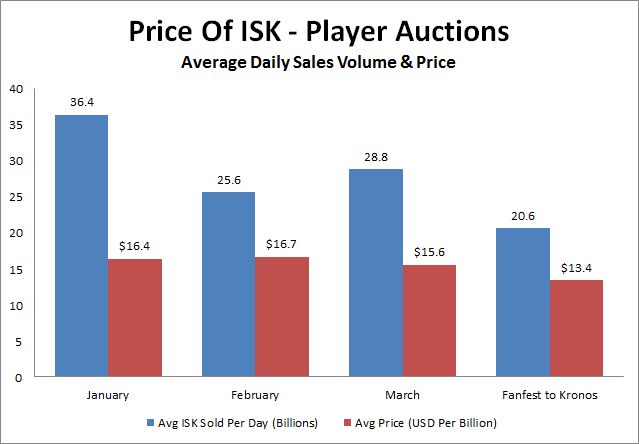 The last statistic that stood out to me was the drop in demand at Player Auctions for ISK.  Compared to January, the amount of ISK sold by stores at Player Auctions in the four weeks leading up to Kronos fell by 43%.  Even more staggering is that the average amount of real world money spent on ISK dropped from $598.62 per day to $274.63, or 54.1%.  I suspect that some of this is seasonal, but the reaction of the ISK selling sites makes me believe something else is also at work.

I don't want to leave the impression that EVE players watched the Security presentation at Fanfest and have reformed.  The evidence of the seven days leading up to the release of Kronos, when stores on Player Auctions sold an average of 34.7 billion ISK per day, definitely argues against that.  But something is happening in the secondary ISK market that is driving prices, and presumably profits, down.  I'm just not sure what is the root cause of the RMTers race to the bottom.

1.  The secondary RMT (real money trading) market consists of those people who buy and sell ISK, PLEX, and items outside of CCP-approved sites and procedures. In the case of EVE Online, activity in the secondary RMT market violates the game's EULA and Terms of Service.

2.  All prices in this post are given in U.S. dollars.

3.  Player Auctions is a website that hosts numerous gold/plat/gil/ISK sellers for many online games.  The site has appeared in some academic papers involving the study of secondary RMT markets.

4.  The figures for the activity on Player Auctions are those I was able to observe.  I am sure that I missed some of the activity, thus these numbers are conservative.  The actual numbers are higher.
Posted by NoizyGamer at 6:00 AM