The rankings of the top twelve MMORPGs as determined by the players of the Xfire community from play on Sunday, 1 June 2014.  For more details about the methodology, click here.  Historical data can be found here.

Sunday saw a big increase in interest by the Xfire community in its favorite MMORPGs.  The 16% increase in time spent playing these games was spurred by the early access launch of Wildstar over the weekend.  Many games saw a decrease in interest as a result, led by Guild Wars 2 (-399 hours) and Final Fantasy XIV (-231 hours).  In addition to Wildstar, RIFT jumped back into the Digital Dozen after a four-week absence.  The games falling off the list this week were Metin 2 and Maple Story.

Measuring Success.  So how did Wildstar do with Xfire members during its early access weekend?  I went through the records of the past two years and pulled information from the launches of several other games. 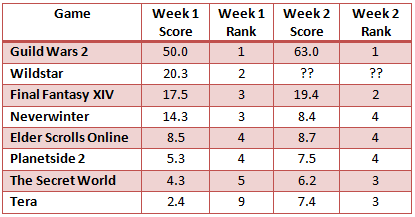 According to the Digital Dozen scores, Wildstar had the second most popular launch among the Xfire community since February 2012.   Only Guild Wars 2's highly successful debut in August 2012, when it vaulted past World of Warcraft, received a warmer reception.  The score promises to get higher next week on the first Sunday after the full launch today.  Of the seven previous games listed, only Neverwinter experienced a drop in interest the second Sunday.  Neverwinter did experience a disastrously exploit-ridden launch in which the in-game economy was crippled right at the start.  Barring news like that, I expect Wildstar to solidify its great start next week.

Blizzard's Magic.  Hidden in the news about Wildstar, World of Warcraft actually experienced a 5.4% increase in playtime on Sunday.  What gives?  Was it the patch released last Tuesday?  Maybe the excitement over the in-game mount competition and the voting that started on Friday?  Or perhaps players were excited at the chance to purchase the Armored Bloodwing mount and Blossoming Ancient pet for 35% off (offer good through 11:59pm PDT today).  The cynical might claim that due to the queues in Wildstar, a lot of players logged into WoW instead.  Whatever the reason, WoW did not see a decline in interest Sunday.  Will that trend continue next week?
Posted by NoizyGamer at 6:00 AM