While many people are waiting on the results of CCP's enforcement of input broadcasting, input multiplexing, and the general enforcement of Section 6A3 of the EVE Online EULA, I'm more interested in the price of illicit ISK.  Following CCP Falcon's post about input broadcasting, I started monitoring the Player Auctions website again to see if anything unusual would occur. 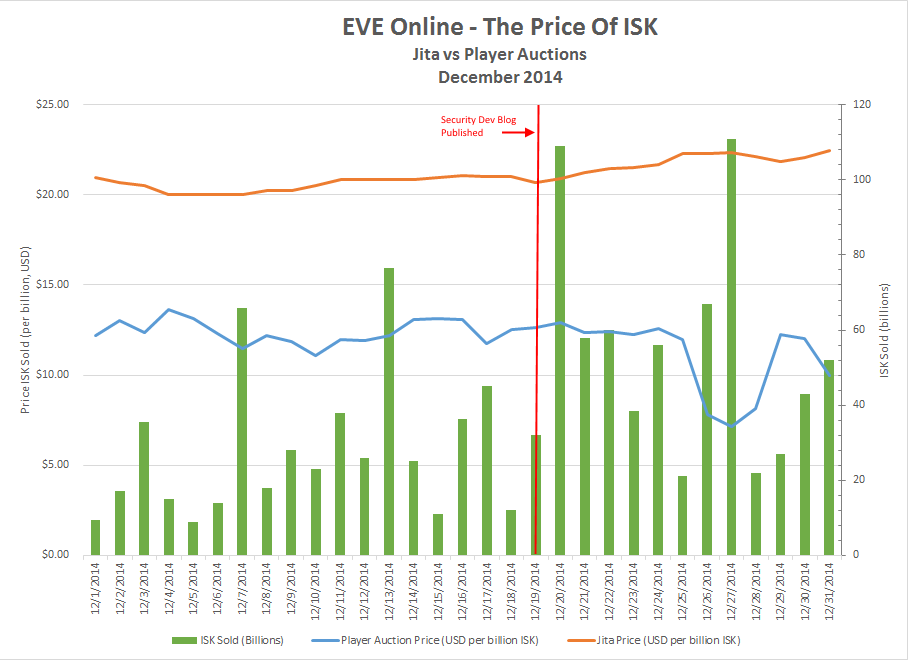 The first was a sharp rise in the purchase of ISK following the publication of the security dev blog on 19 December.  In the dev blog, CCP Grimmi announced a change in the punishment for those who purchase ISK outside of the PLEX system.  The penalties increased to a 7-day suspension of all accounts for a first offense and a permanent ban of all accounts for a second offense.  I'm not sure that the following day's sales volume of 109 billion ISK sold the next day was a direct result of the dev blog, but the possibility exists.  I don't have figures from December 2013 to do a proper comparison, but 58% of the ISK sales I was able to track occurred in the final 13 days of the month.

Of course, another reason so much illicit ISK was sold in the final two weeks of the year was due to someone holding a fire sale.  A new seller created an account Christmas night and started selling ISK at 40-45% of the going market price.  From 26-28 December, the individual managed to sell 185 billion ISK.  The dip in the graph on those three days shows the effect the one seller had on the market.  The same seller then delisted until 31 December, when the account sold another 21 billion ISK.

A funny thing happened.  The seller appeared on the site by noon EVE time but by 8pm when I looked again, the seller had disappeared.  Either the seller ran out of ISK, or CCP tracked down the seller's assets in-game.  Currently, I don't have enough information to say one way or the other.  But distributing that much ISK that quickly may have made the seller very noticeable.

What does January have in store?  I'm not sure, although with the new policies hopefully players will turn to purchasing PLEX from a reputable source instead of going to shady ISK sellers.  But only time will tell.  Then again, perhaps if a lot of players start receiving bans, that will get the message out about not patronizing the ISK sellers.