Rising PLEX Prices And The End Of Gambling

As part of my research into real money trading in EVE, I keep track of the price of PLEX in Jita. The average price of 30 days of game time reached 1.2 billion ISK yesterday. Since CCP shut down I WANT ISK on 12 October, the price of PLEX increased by 4.3%. Therefore, CCP's crackdown on RMT activity within IWI, combined with the directed denial of service attack that forced Eve Bet to shut its doors, is the reason that the PLEX price is rising, right? 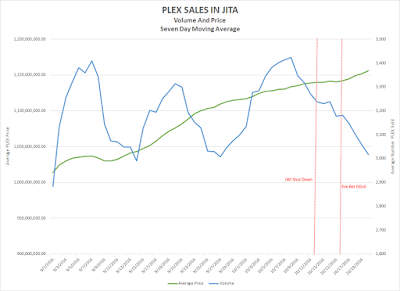 I took a look at the 7-day rolling average of both the average price of PLEX and daily volume of sales and found the theory is probably not true. Since the second week of September, the price of PLEX has steadily risen. The recent rise in price looks like a part a longer term trend, not a reaction to a black swan event. 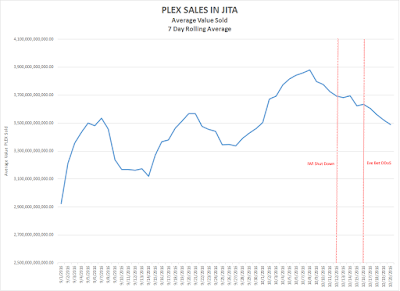 What draws my interest in the market is the demand for ISK. Players exchange game time for virtual currency. Even with the recent drop from the high demand peak on 8 October, the 7-day rolling average of the amount of ISK exchanged for PLEX still was 19.4% higher on 20 October than on 1 September.

Perhaps in the long run the closing of the gambling sites will result in a reduced supply of PLEX on the market. But at this point, I don't see the closing of two of EVE's largest casinos affecting the markets that much. And with the upcoming introduction of Alpha state clones, we may never have the data to know for sure.
Posted by NoizyGamer at 6:00 AM